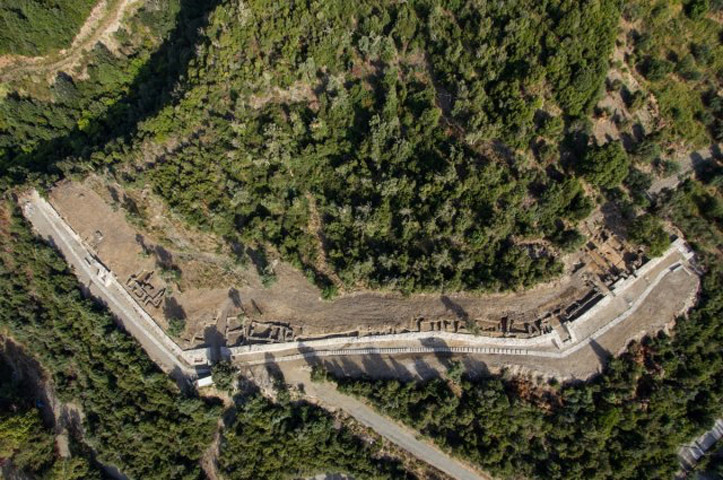 Becoming familiar with the Velika Castle

A castle of particular archaeological interest, which has been systematically researched in recent years, dominates the settlement of Velika in the municipality of Agia Larissa on a verdant hill and a short distance from the coast of the area.

The Castle of Velika, as archaeological research has shown so far, dates to the Justinian period, but is built on the ruins of ancient fortifications.

According to the data of the Ephorate of Antiquities of Larissa, the castle has an area of around 5 acres with a wall two meters thick and a height of three meters. Five towers and two gates have been unearthed here. On the south side, alongside the Byzantine wall, a significant part of the ancient fortification has been preserved.

The location of the castle was intended to control the plain as well as the coastal route of Kissavos. Three periods of fortification have been found at the site, dating from antiquity to the Early Byzantine period.

Head of the Ephorate of Antiquities of Larissa Stavroula Sdrolia explained to the Athens and Macedonia News Agency that the Castle of Velika is of great archaeological and historical interest, as many of the findings highlight the way societies of the time were organized.

Among other things, Ms Sdrolia noted that the castle was a fortress for the protection of the settlement, which was essentially rural and pointed out that the castle also had a role of storing goods and merchandise transported by sea.

“Ships passed by also transporting goods from southern Greece, but Velika castle is also believed to have been on the supply route of the Black Sea castle settlements. There are many findings originating from present-day Palestine, Africa and elsewhere, so it can be argued that the castle also had such a role to play. There was a large network that the Byzantine state had engaged in supplying, not only the cities, but the castles as well of which there were very many, ”said Ms Sdrolia.

It is worth mentioning that research on the Castle of Velika still has a long way to go, since only the finds in 0.74 of an acre out of 3 have been unearthed and studied. Many summer excavations host archaeology university students from Greece and abroad, as well as quite a few volunteers.

In recent years, a very interesting festival is held at the Castle of Velika in August and there is a significant response from visitors both from the surrounding areas and across Greece. The events are held in celebration of the August full moon and include dance, poetry, music and many excursions to the archaeological sites.