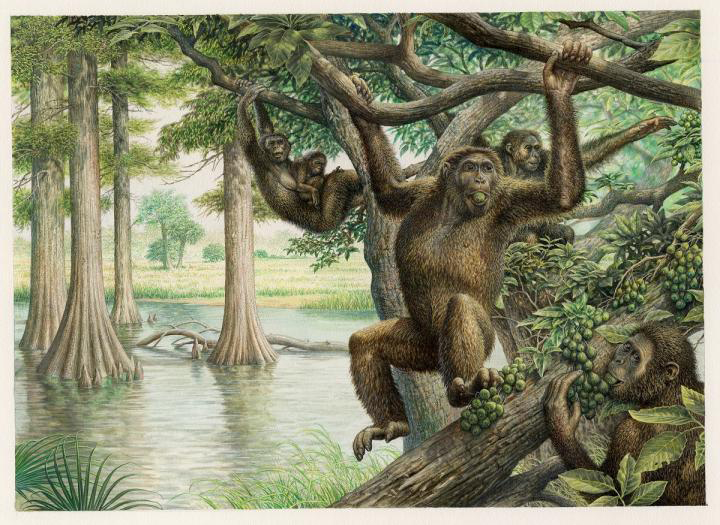 Rudapithecus adds its story to the origins of how humans evolved

Near an old mining town in Central Europe, known for its picturesque turquoise-blue quarry water, lay Rudapithecus. For 10 million years, the fossilized ape waited in Rudabánya, Hungary, to add its story to the origins of how humans evolved.

What Rudabánya yielded was a pelvis – among the most informative bones of a skeleton, but one that is rarely preserved. An international research team led by Carol Ward at the University of Missouri analyzed this new pelvis and discovered that human bipedalism – or the ability for people to move on two legs – might possibly have deeper ancestral origins than previously thought.

The Rudapithecus pelvis was discovered by David Begun, a professor of anthropology at the University of Toronto who invited Ward to collaborate with him to study this fossil. Begun’s work on limb bones, jaws and teeth has shown that Rudapithecus was a relative of modern African apes and humans, a surprise given its location in Europe. But information on its posture and locomotion has been limited, so the discovery of a pelvis is important.

“Rudapithecus was pretty ape-like and probably moved among branches like apes do now – holding its body upright and climbing with its arms,” said Ward, a Curators Distinguished Professor of Pathology and Anatomical Sciences in the MU School of Medicine and lead author on the study. “However, it would have differed from modern great apes by having a more flexible lower back, which would mean when Rudapithecus came down to the ground, it might have had the ability to stand upright more like humans do. This evidence supports the idea that rather than asking why human ancestors stood up from all fours, perhaps we should be asking why our ancestors never dropped down on all fours in the first place.”

Modern African apes have a long pelvis and short lower back because they are such large animals, which is one reason why they typically walk on all fours when on the ground. Humans have longer, more flexible lower backs, which allow them to stand upright and walk efficiently on two legs, a hallmark characteristic of human evolution. Ward said if humans evolved from an African ape-like body build, substantial changes to lengthen the lower back and shorten the pelvis would have been required. If humans evolved from an ancestor more like Rudapithecus, this transition would have been much more straightforward.

“We were able to determine that Rudapithecus would have had a more flexible torso than today’s African apes because it was much smaller – only about the size of a medium dog,” Ward said. “This is significant because our finding supports the idea suggested by other evidence that human ancestors might not have been built quite like modern African apes.”

Ward teamed up with Begun to study the pelvis along with MU alumna Ashley Hammond, Assistant Curator of Biological Anthropology at the American Museum of Natural History, and J. Michael Plavcan, a professor of anthropology at University of Arkansas. Since the fossil was not 100% complete, the team used new 3D modeling techniques to digitally complete its shape, then compared their models with modern animals. Ward said their next step will be to conduct a 3D analysis of other fossilized body parts of Rudapithecus to gather a more complete picture of how it moved, giving more insight into the ancestors of African apes and humans.