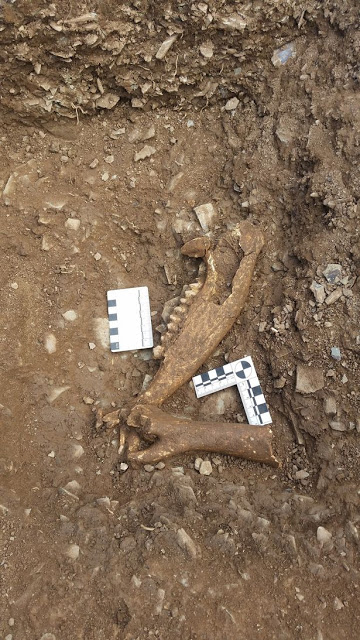 Findings near Ipplepen, in South Devon

The “incredibly rare” discovery of Roman cattle bones by archaeologists has shed new light on how ancient farmers butchered and sold meat.

The bones were found by experts and students from the University of Exeter, along with members of the local community, who are excavating a Roman settlement near Ipplepen, in South Devon.

The remains are mostly just the heads and feet of cattle, which would have been thrown in a ditch by people living and working in the area 1,700 years ago. This may have been the waste from a Roman abattoir. Early analysis of the bones suggests that cattle grazing in nearby fields were brought to the site and then butchered when they were at the prime age for producing beef (rather than being kept alive until they reached old age). The best cuts of meat were probably sold to be eaten elsewhere.

Archaeologists have also found a piece of sawn deer antler, possibly used for making objects such as awls, needles, combs and hairpins. This is the first time that evidence for Romano-British bone or antler working has been discovered in Devon outside of Exeter.

Waste from the smithing of iron found during the excavation indicates that there was a blacksmith’s forge nearby, while the discovery of a stone weight may have been used in the weaving of textiles.

Pottery and coins from the Roman settlement suggest the site was occupied from the mid-1st through to the late 4th centuries AD.

Professor Stephen Rippon, from the University of Exeter, who is leading the archaeological work, said: “This site has revealed an incredible amount about life in Devon during the Roman period.

“It is really rare to get animal bones preserved on rural archaeological sites in the South West as its acidic soils normally dissolve the calcareous bones. The finds from Ipplepen are therefore an exciting discovery as they shed new light on farming practices in the Roman period”.