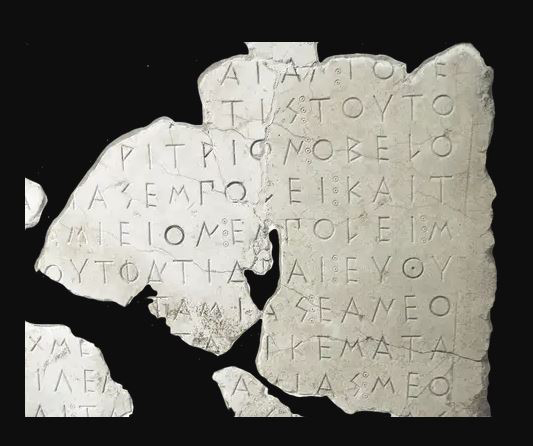 A case study on Greek epigraphy

A research team of Deep Mind, headed by Greek scientist Yannis Assael, has created PYTHIA, an “intelligent” system which seems to manage even better than humans in reading damaged inscriptions.

The research has been submitted last week, and its full citation is: Yannis Assael, Thea Sommerschield, Jonathan Prag, “Restoring ancient text using deep learning: a case study on Greek epigraphy”. Here, you can read part of the prepublication of the study.

Ancient History relies on disciplines such as Epigraphy, the study of ancient inscribed texts, for evidence of the recorded past. However, these texts, “inscriptions”, are often damaged over the centuries, and illegible parts of the text must be restored by specialists, known as epigraphists. This work presents PYTHIA, the first ancient text restoration model that recovers missing characters from a damaged text input using deep neural networks. Its architecture is carefully designed to handle longterm context information, and deal efficiently with missing or corrupted character and word representations. To train it, we wrote a nontrivial pipeline to convert PHI, the largest digital corpus of ancient Greek inscriptions, to machine actionable text, which we call PHI-ML. On PHI-ML, PYTHIA’s predictions achieve a 30.1% character error rate, compared to the 57.3% of human epigraphists. Moreover, in 73.5% of cases the ground-truth sequence was among the Top-20 hypotheses of PYTHIA, which effectively demonstrates the impact of this assistive method on the field of digital epigraphy, and sets the state-of-the-art in ancient text restoration.

Historians rely on different sources to reconstruct the thought, society and history of past civilisations. Many of these sources are text-based – whether written on scrolls or carved into stone, the preserved records of the past help shed light on ancient societies. However, these records of our ancient cultural heritage are often incomplete: due to deliberate destruction, or erosion and fragmentation over time. This is the case for inscriptions: texts written on a durable surface (such as stone, ceramic, metal) by individuals, groups and institutions of the past, and which are the focus of the discipline called epigraphy. Thousands of inscriptions have survived to our day; but the majority have suffered damage over the centuries, and parts of the text are illegible or lost (fig. 1). The reconstruction (“restoration”) of these documents is complex and time consuming, but necessary for a deeper understanding of civilisations past.

One of the issues with discerning meaning from incomplete fragments of text is that there are often multiple possible solutions. In many word games and puzzles, players guess letters to complete a word or phrase – the more letters that are specified, the more constrained the possible solutions become. But unlike these games, where players have to guess a phrase in isolation, historians restoring a text can estimate the likelihood of different possible solutions based on other context clues in the inscription – such as grammatical and linguistic considerations, layout and shape, textual parallels, and historical context. Now, by using machine learning trained on ancient texts, we’ve built a system that can furnish a more complete and systematically ranked list of possible solutions, which we hope will augment historians’ understanding of a text.

Pythia – which takes its name from the woman who delivered the god Apollo’s oracular responses at the Greek sanctuary of Delphi – is the first ancient text restoration model that recovers missing characters from a damaged text input using deep neural networks. Bringing together the disciplines of ancient history and deep learning, the present work offers a fully automated aid to the text restoration task, providing ancient historians with multiple textual restorations, as well as the confidence level for each hypothesis.

Pythia takes a sequence of damaged text as input, and is trained to predict character sequences comprising hypothesised restorations of ancient Greek inscriptions (texts written in the Greek alphabet dating between the seventh century BCE and the fifth century CE). The architecture works at both the character- and word-level, thereby effectively handling long-term context information, and dealing efficiently with incomplete word representations. This makes it applicable to all disciplines dealing with ancient texts (philology, papyrology, codicology) and applies to any language (ancient or modern).

The combination of machine learning and epigraphy has the potential to impact meaningfully  the study of inscribed texts, and widen the scope of the historian’s work. For this reason, we have open-sourced an online Python notebook, Pythia, and PHI-ML’s processing pipeline at https://github.com/sommerschield/ancient-text-restoration, collaborating with scholars at the University of Oxford. By so doing, we hope to aid future research and inspire further interdisciplinary work.