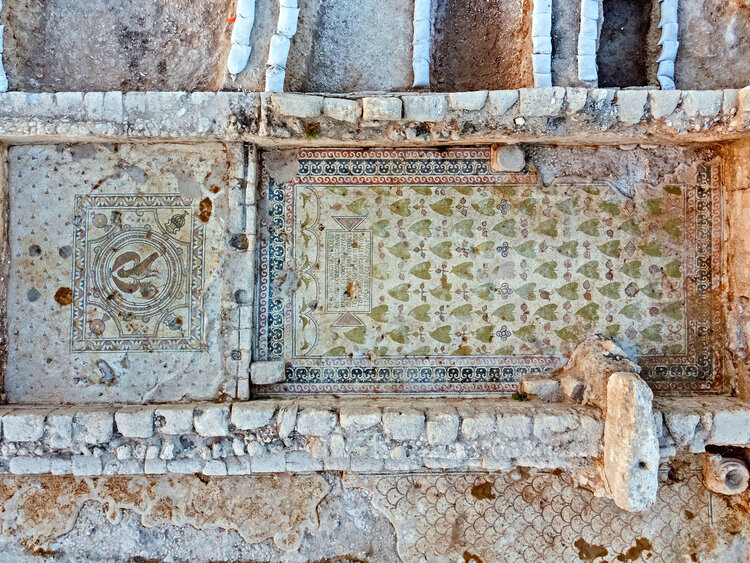 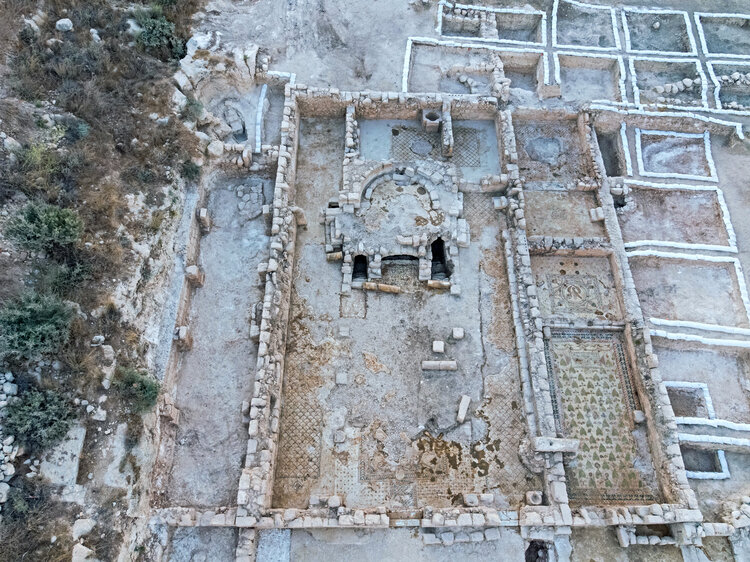 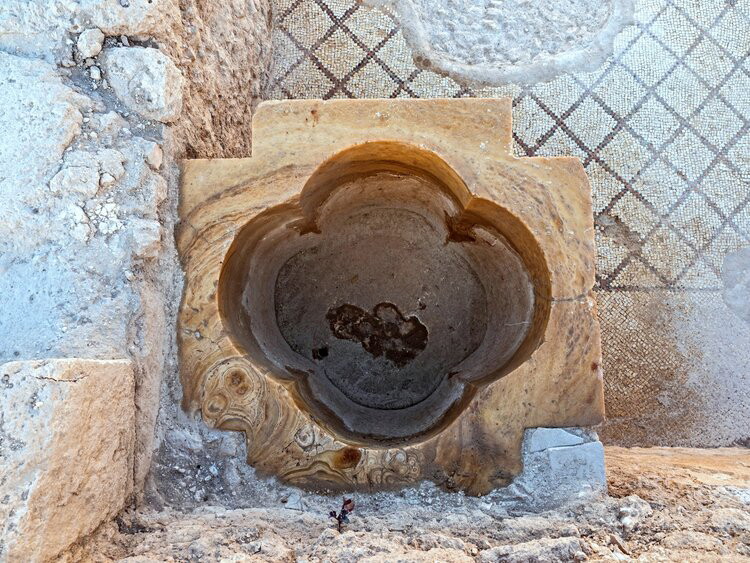 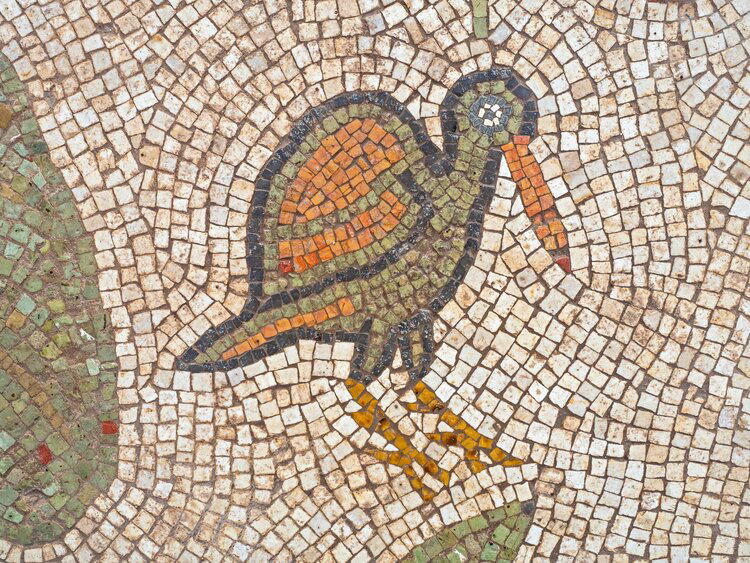 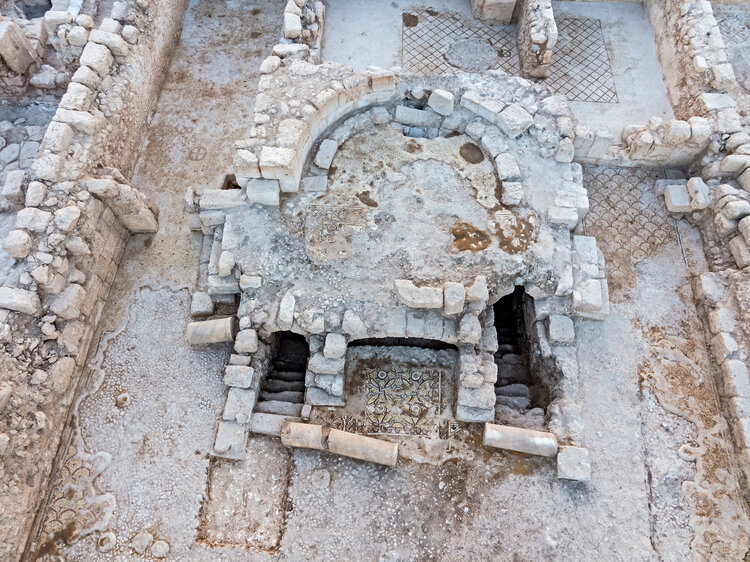 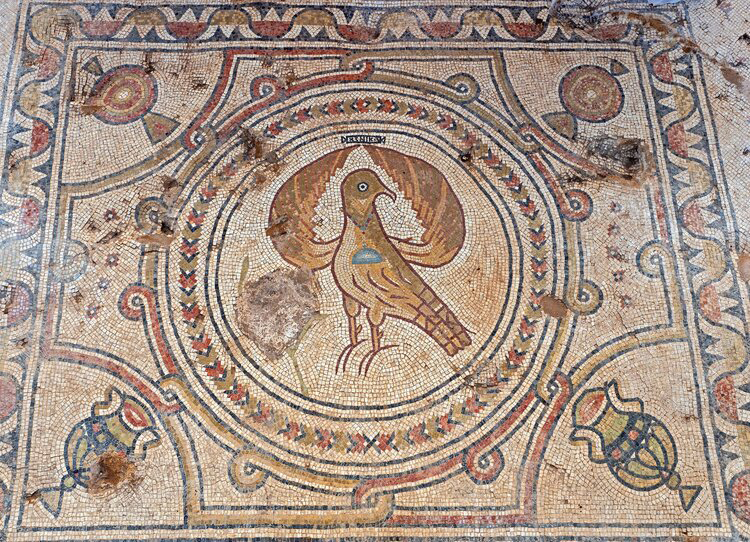 Church of the “Glorious Martyr”

Written on the mosaic courtyard of a 1,500 year-old church  in a neighborhood west of Jerusalem, the Israel Antiquities Authority (IAA) discovered a Greek inscription commemorating the “Glorious Martyr.” Who this martyr was remains a mystery, but the magnificence of the church and a second inscription indicating that Emperor Tiberius II himself funded its construction, suggest the martyr was a figure of great importance.

The church is at the center of a larger architectural complex discovered in excavations at Ramat Beit Shemesh. Structured like a basilica, the rectangular church is divided by two parallel rows of pillars into three areas: a central courtyard with halls on either side. In front of the church is a spacious courtyard, or atrium, where the inscription was discovered. Next to the basilica are a number of smaller chapels for prayer and worship.

Impressive not only in size, the Basilica is decorated with spectacular mosaic floors depicting birds, fruits, leaves and geometric designs. The walls are covered with colorful frescoes. Several of the pillars’ capitals are engraved and made from imported marble. A rare cross-shaped baptismal was also discovered, made from calcite stone queried mainly from karstic caves.

Archaeologists were excited to discover the church’s crypt was exceptionally well preserved. According to Benjamin Storchan, director of the excavations on behalf of the IAA, “We have uncovered few churches of this type in the country, especially those with a crypt that survived in its entirety.” Storchan continues to explain that the crypt was an “underground burial chamber where, presumably, the relics of the saints were kept.” Two parallel staircases access the crypt, one for entering the subterranean chamber and the other for exiting back into the prayer hall. According to Storchan, this system was an architectural adjustment made to accommodate large groups of Christian pilgrims visiting the church and the relics within the crypt. The crypt’s interior was decorated with marble slabs, creating an impressive appearance.

The church was first founded in the 6th century AD, and expanded several years later by the Byzantine Emperor Tiberius II Constantine. The financing and expansion of the church was documented by a Greek inscription on site. According to Storchan, “Many written sources testify to the imperial funding of churches in Israel; however, little is known in archaeological study about dedicated inscriptions such as the one found in Beit Shemesh.” Another mosaic depicts a large eagle with spread wings, a symbol of the Byzantine Empire. This also testifies to imperial involvement in the church’s expansion.

Excavations at the “Glorious Martyr” church have been underway for three years. Thousands of youth participated in the excavation, which was funded by the Ministry of Construction and Housing, and executed by the CPM Corporation. Excavators recovered thousands of artifacts from the site, including what appears to be the most complete collection of Byzantine windows and lamps ever discovered on a single site in Israel. On October 23, 2019, the finds were presented to the public in a new exhibit at the Bible Lands Museum in Jerusalem.