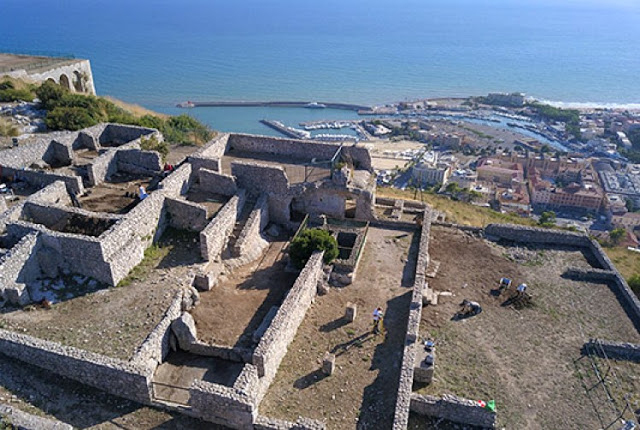 Terracina: A Cosmopolitan City Near Rome

Site of the first Hellenistic temple in the region

In a new excavation project undertaken by German and Italian researchers, LMU archaeologists Paul Scheding and Francesca Diosono have uncovered evidence suggesting that Terracina was the site of the first Hellenistic temple in the region.

High above the ancient city of Tarracina (now Terracina) south of Rome, there was once a large-scale terraced sanctuary that included a small temple. The building afforded a wide prospect over the harbor on one side and the Via Appia, the city’s most important link with Rome, on the other.

In the course of an excavation project which is planned to last for three years, Paul Scheding and Francesca Diosono from the Institute for Classical Archaeology at LMU Munich will focus their attention primarily on the small temple.

They have now been able to reconstruct its exact extent, which allowed them to confirm that the structure was built during the second century BC. This makes it the oldest Hellenistic structure of this type in Latium, and perhaps the very first terraced temple in the region.

“The temple underlines the significance of Tarracina at this time,” says Scheding. The city was obviously in contact with the most important Hellenistic cities in the Mediterranean, even before the Roman conquest of Latium.

The temple itself and Monte Sant’Angelo, the hill on which it was erected was once reserved for religious ceremonies. The excavations have also confirmed that temple’s facade was oriented, not towards the harbor, but towards the Via Appia and the city below.

“On important feast-days, processions left the city and climbed the hill to the temple,” says Scheding, and merchants and travelers also visited the temple. The excavators have not yet identified the god to whom the temple was dedicated. The shrine is associated with an unusually large number of cisterns, but what the water was needed for remains unclear.

The excavations have also uncovered traces of a pre-Roman settlement that dates back to the 7th or perhaps even as far as the 9th century BC. Who lived here before the construction of the temple is also unknown as yet.

Literary sources dating to the 6th century BC attest to the presence of the Volsci in the area, but these people have not been definitively associated with any archaeological finds in the area. Further work over the next two years may help to clarify how the shrine on Monte Sant’Angelo developed prior to and following the conquest of the region by the Romans.