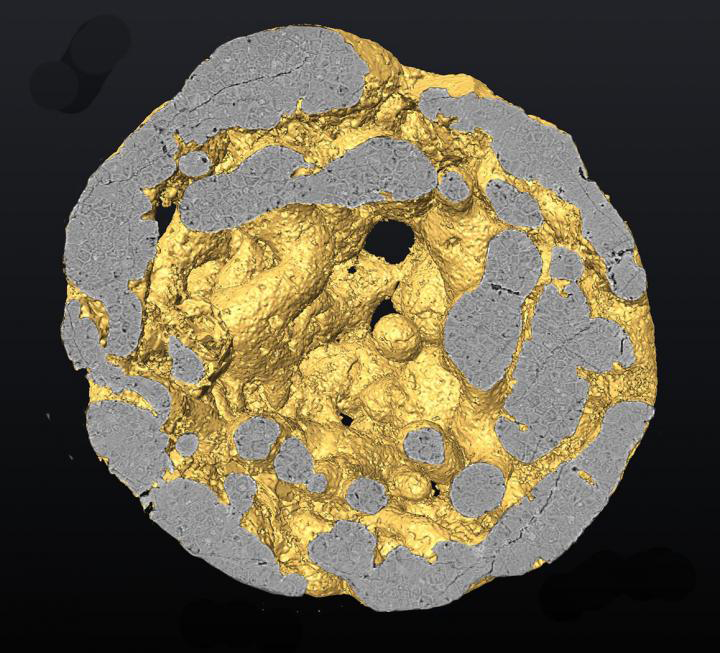 After analyzing ancient fossils of Caveasphaera

Animals evolved from single-celled ancestors before diversifying into 30-40 distinct anatomical designs. When and how animal ancestors made the transition from single-celled microbes to complex multicellular organisms is unclear. But a new scientific study suggests animal-like embryological traits developed long before animals themselves.

The research—by an international research team led by scientists from the Nanjing Institute of Geology and Palaeontology of the Chinese Academy of Sciences (NIGPAS) and the University of Bristol—focused on ancient fossils of Caveasphaera, a multicellular organism found in 609-million-year-old rocks in South China’s Guizhou Province that defies easy definition as animal or non-animal.

Using X-ray microscopy, the researchers analyzed the tiny fossils, which measure about a half-millimeter in diameter and were preserved down to their component cells. Various fossils displayed different stages of Caveasphaera development—from a single cell to a multicellular organism.

“We were able to sort the fossils into growth stages, reconstructing the embryology of Caveasphaera,” said Kelly Vargas from the University of Bristol.

YIN Zongjun of NIGPAS interpreted the discovery: “Our results show that Caveasphaera sorted its cells during embryo development in just the same way as living animals, including humans.” YIN emphasized, however, there is “no evidence that these embryos developed into more complex organisms.”

Still, the discovery offers the earliest evidence of a key step in the evolution of animals – the capacity to develop distinct tissue layers and organs.

The verdict still seems to be out on whether Caveasphaera was itself an animal or just an important step in animal evolution, even as researchers search for more fossils. Co-author ZHU Maoyan of NIGPAS said, “Caveasphaera looks a lot like the embryos of some starfish and corals — we don’t find the adult stages simply because they are harder to fossilize.”

Whatever Caveasphaera turns out to be, its fossils tell us that animal-like embryonic development evolved long before the oldest definitive animals appeared in the fossil record.