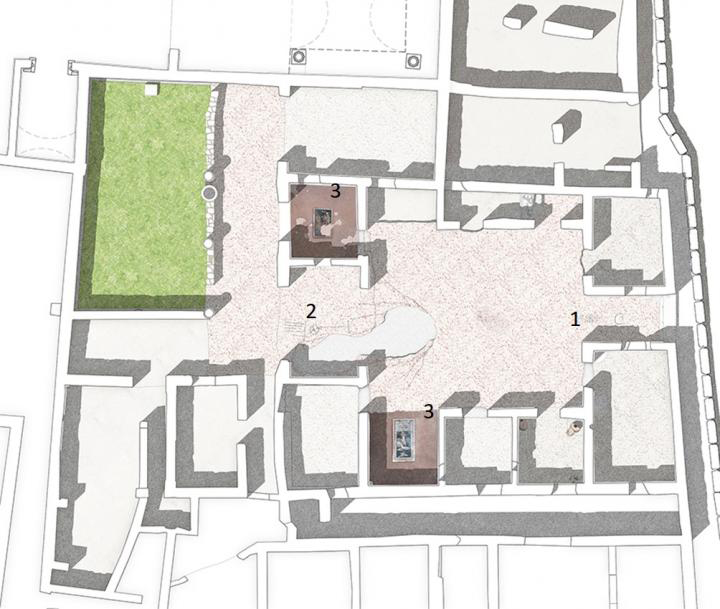 Revealing the art of the Roman surveyors

The technical skills of the Roman agrimensores—the technicians in charge of the centuriations (division of the lands) and of other surveys such as planning towns and aqueducts—are simply legendary. For instance, extremely accurate projects of centuriations are still visible today in Italy and in other Mediterranean countries. Their work had also religious and symbolic connections being related with the foundation of towns and the Etruscan’s tradition.

These technicians were called Gromatics due to their chief working instrument, called Groma. It was based on a cross made of four perpendicular arms each bringing cords with identical weights, acting as plumb-lines. The surveyor could align with extreme precision two opposite, very thin plumb-lines with reference poles held at various distances by assistants or fixed in the terrain, in the same manner as palines (red and white posts) are used in modern theodolite surveying.

Up to now, the unique known example of a Groma was coming from Pompeii excavations, while images illustrating the work of the Gromatics were passed on only by medieval codex’s, dating to many centuries after the art of the agrimensores was not practiced any more. It now looks like that again Pompeii is the place where new information about these ancient architects can come out. As part of the Great Pompeii Project indeed, inaugurated in 2014 and co-financed by the European Community, new archaeological investigations unearthed a house with a solemn, ancient facade. Inside, almost intact floors have been found containing two beautiful mosaics probably representing Orion, and a series of enigmatic images.

The interpretation of the images has been recently given in a joint paper by Massimo Osanna, Director of the Pompeii archaeological site, and Luisa Ferro and Giulio Magli, of the School of Architecture at the Politecnico of Milan. Among the images there is, for instance, a square inscribed in a circle. The circle is cut by two perpendicular lines, one of which coincides with the longitudinal axis of the atrium of the house and appears as a sort of rose of the winds that identifies a regular division of the circle in eight equally spaced sectors. The image is strikingly similar to one used in the medieval codex’s to illustrate the way in which the Gromatics divided the space. Another, complex image shows a circle with an orthogonal cross inscribed in it, connected by five dots disposed as a sort of small circle to a straight line with a base. The whole appears as the depiction of a Groma.

Was the house used for meetings and/or the owner himself belonged to the gromatic’s guild? We do not know it for sure. In any case however, and once again, Pompeii reveals itself as an invaluable source in understanding key aspects of the Roman life and civilization.