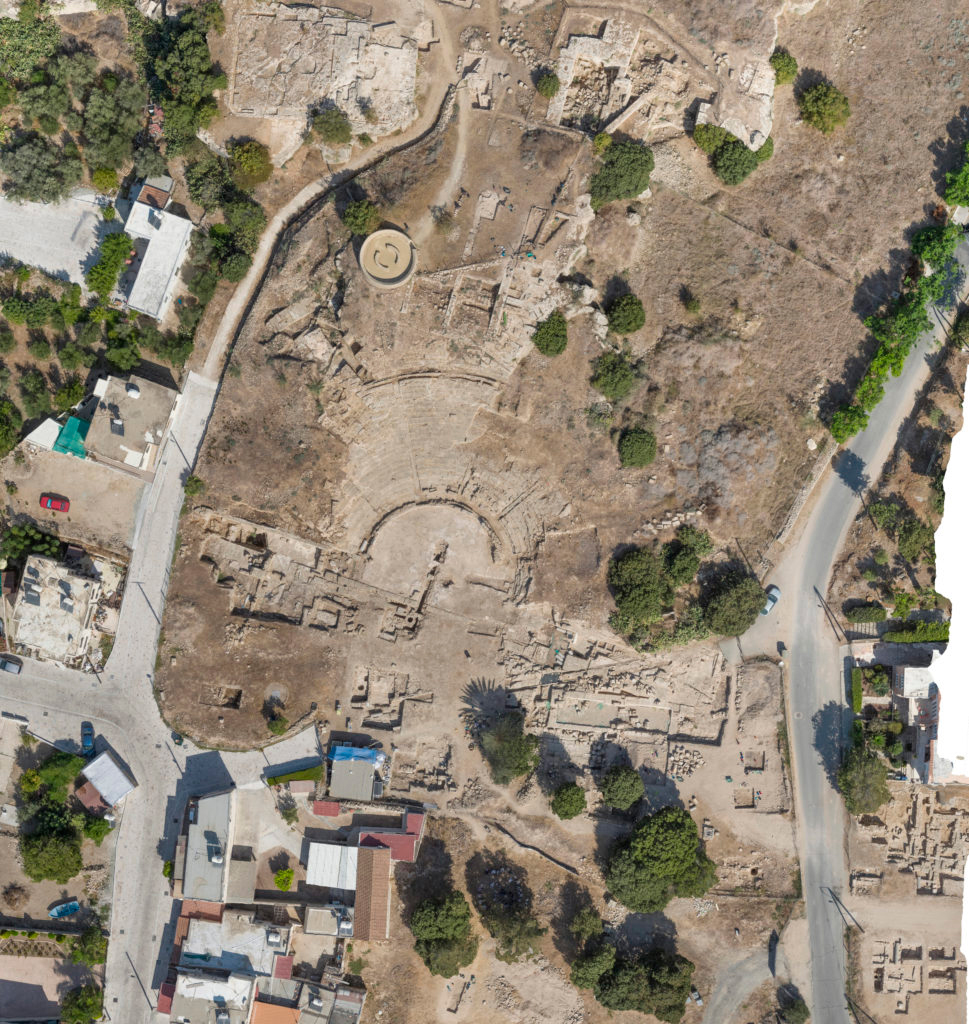 Excavating in Nea Paphos in 2019

The site of the Hellenistic-Roman theatre

The Paphos Theatre Archaeological Project recently conducted its 19th excavation season at the World Heritage listed site of the Hellenistic-Roman theatre of Nea Paphos. Nea Paphos was the capital of Cyprus during the Ptolemaic and Early Roman periods and the theatre was one of the grandest public buildings in the city. It was constructed in c. 300 BC during the foundation of the city, and was used for performance and spectacles for more than six centuries until its destruction by earthquake in around 365 AD. Considerable Late Antiquity, Medieval and post-Medieval activity on the site of the former theatre has also been subject to the investigations.

2019 was one of the project’s largest seasons: more than 70 archaeologists, specialists, students and contributing volunteers toiled away on the site, opening a number of trenches. And the results? Well, analysis of finds and trenches is still continuing but as a result of the endeavours of the team we now know a number of new things about the ancient theatre and its surroundings.

A wide paved road of the 2nd century AD was the major decumanus [east-west running thoroughfare of a Roman city] of Nea Paphos. The road was paved, colonnaded and had a major drainage system running beneath it. It was also more than 8 and a half metres wide and wheel ruts suggest that it was used for vehicular traffic. It also sloped considerably between the east (where it accessed the city’s gate) and towards the west where it would have intersected with a colonnaded cardo [north-south running main road]. The slope is 1.98 metres over a distance of approximately 50 metres.

The road was eventually covered by walls and structures collapsed as a result of earthquakes, and later filled with architectural elements taken from the theatre as it was stripped of stone in Late Antiquity. In 2019 another marble Corinthian capital and a three-metre length of a Troad granite column were recovered from above the road pavers.

Excavations to the south of the road this season have confirmed the long-suspected dimensions of the insula blocks that this road network served. Investigations 30 metres to the south of the paved road revealed a wall and the surface of another street, although nowhere as ordered as the paved roads of the decumanus. The function of the building or buildings between the two still remains unknown and will be investigated in future seasons. We also now know the drainage system associated with the paved road is more complex than we initially thought.

There were other important trenches opened during 2019, elsewhere on the theatre and nearby. As always with excavations as one question is answered, the soil reveals a dozen new questions. This season uncovered some exciting finds: our first ever example of egg-and-dart moulding on a Roman limestone architectural element, a fragment of a Roman inscription written in Greek, fragments of Late Hellenistic or early Roman painted plaster from the wall of a building, and an intact medieval vase which created much excitement amongst the team. We shall return in our next season to try and answer some of these new questions!

The work of the Paphos Theatre Archaeological Project is only possible because of the support of the Australian Archaeological Institute at Athens and the Nicholson Museum at the University of Sydney. The team excavates under the auspices of the Department of Antiquities of Cyprus.