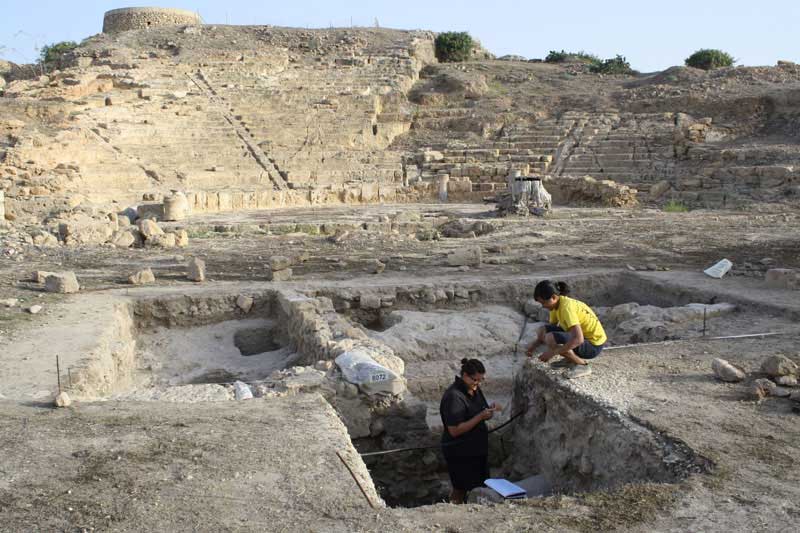 New finds at the ancient theatre of Nea Paphos

The fifteenth season of archaeological investigations of the precinct of the ancient Hellenistic-Roman theatre of Nea Paphos has been completed. The excavations, which took place between the 24th of September and 25th of October 2012, were conducted by the University of Sydney under the direction of Dr Craig Barker and Dr Smadar Gabrielli. The Australian archaeological excavations in Paphos are supported by the Nicholson Museum and by the Australian Archaeological Institute at Athens.

In 2012 a team of 34 archaeologists and students worked in the precinct of the ancient theatre of Nea Paphos on the southern slope of Fabrika hill. Paphos was the capital of Cyprus in the Hellenistic and Roman periods and the archaeological remains are inscribed on the World Heritage List. In keeping with the status of Paphos in the Hellenistic and Roman periods, the theatre proved to be one of the largest in Cyprus. Investigation has revealed that the theatre of Paphos underwent five phases of renovations between 300 BC and the 4th century AD, each phase representing the evolution of ancient performance and theatre architecture. Many of the architectural features were robbed away in antiquity, and the area of the site was built over in the Middle Ages.

The theatre of Paphos is the only ancient theatre of Cyprus not to have undergone modern restoration, and as such is now a unique structure on the island as it is the sole remaining theatre containing visible traces of its architectural development.

Five trenches were opened by the team in 2012 in various locations around the theatre and the nearby Roman Nymphaeum uncovered in the area. Trench 12A was on the eastern side of the stage building, and located the bedrock foundations of the eastern end of the Roman stage. A new entrance way leading from the south onto the eastern parodos of the theatre was located at a lower level than a Roman period one which may provide a rare indication of the architectural layout of the earlier phases of the theatre building. Trench 12B continued work in the area of the Roman road to the south of the theatre that began in 2010, clearing more of the road pavements and more of a medieval building above it. Trench 12C was on the upper levels of the cavea and indicates that there were significant buildings constructed on the top of Fabrika hill after the theatre was no longer in use for performance. Trench 12D was in the area of the western parodos of the theatre, while Trench 12E explored the located post-medieval well to the south east of the site. All areas provided new architectural information about the layout of the theatre and surrounding building, and all areas will be explored further in the future.

In parallel with the excavation, the team’s specialists continued archaeological interpretation of the architecture and finds from the site for final academic publication in the near future. A number of significant finds were made this year, including fragments of marble sculptural adornments from the theatre’s stage building and the nymphaeum.