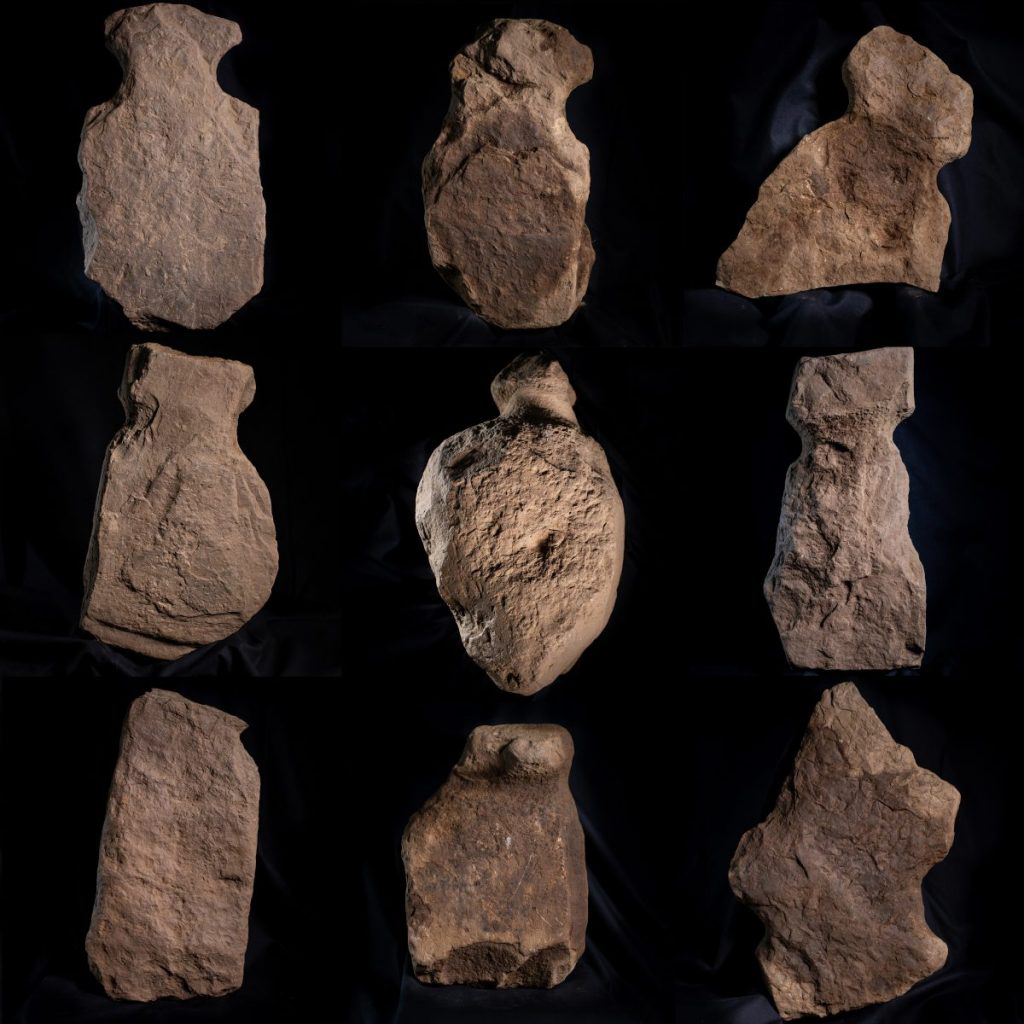 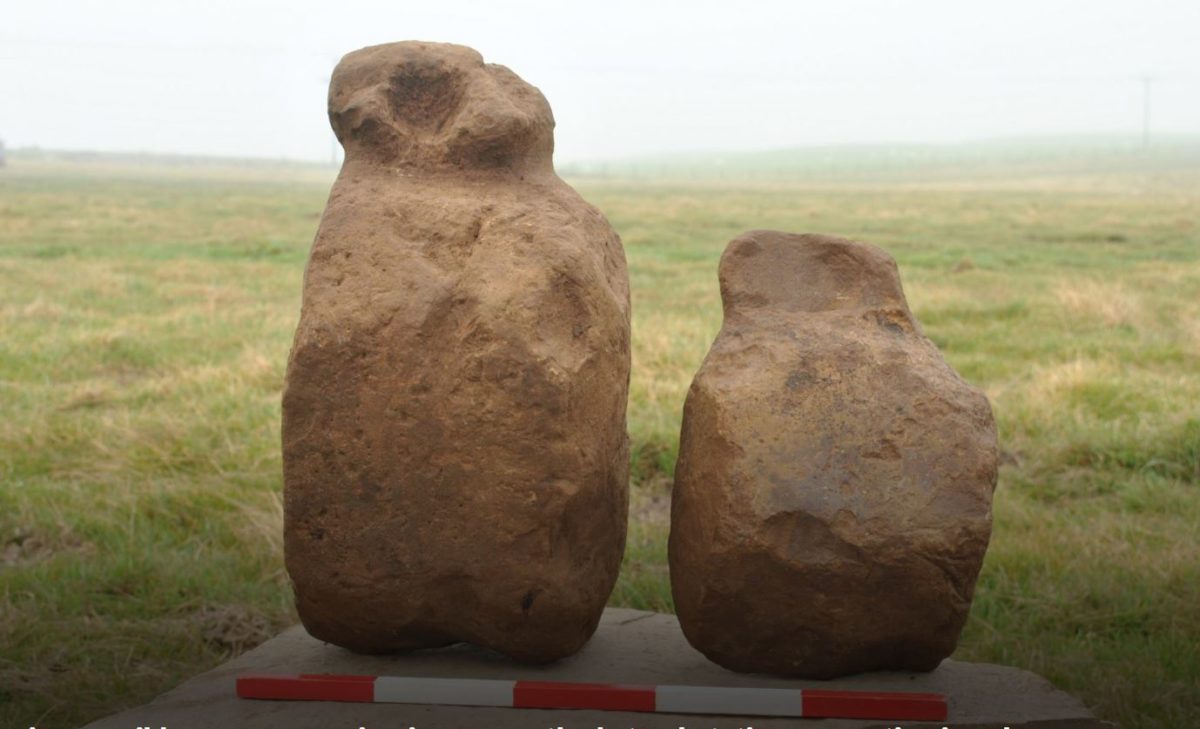 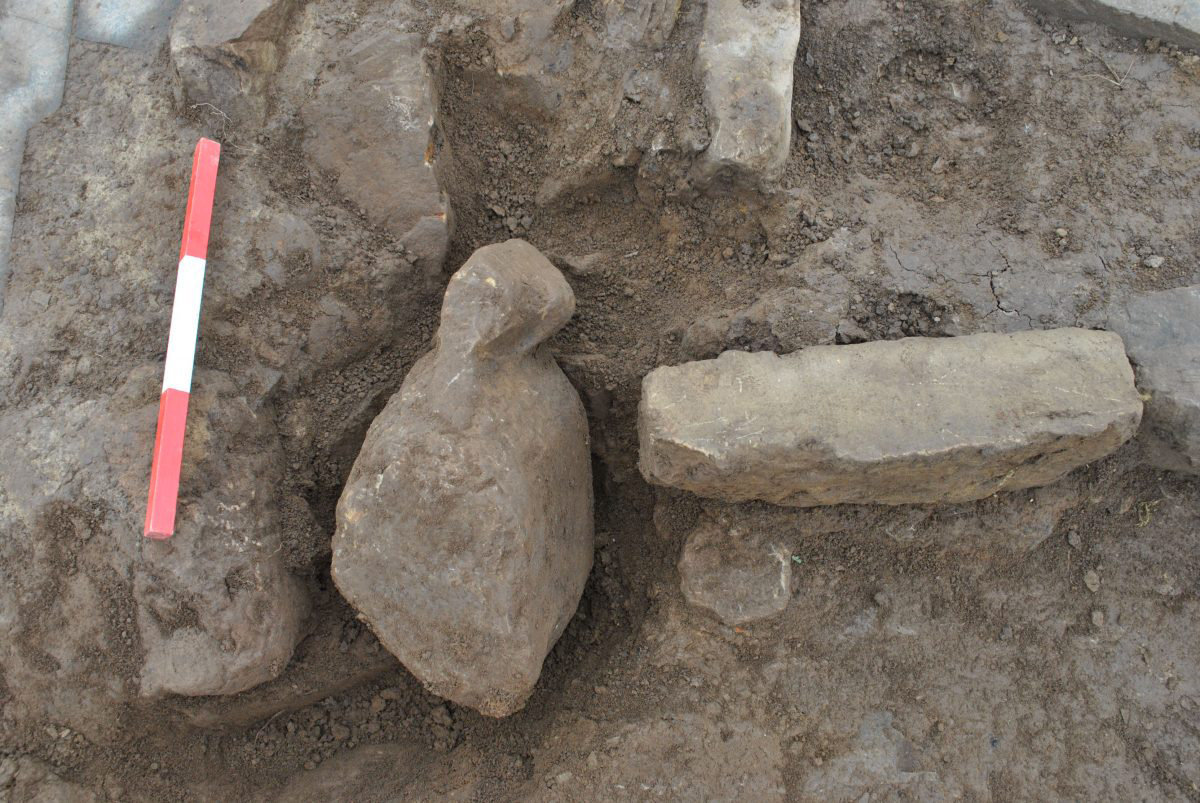 A team from ORCA Archaeology has discovered an amazing series of half-metre tall stone-carved objects while completing exploratory archaeological excavations connected with the development of an electrical substation on behalf of SSEN Transmission in Orkney.

In total, nine carved stones have been unearthed in the remains of a structure revealed at the proposed Finstown substation site, after digging through sixty centimetres of midden deposits.

Some of the objects look remarkably like stylised representations of the human form, whilst others look more like stones set upright into the floor of a Bronze Age building excavated by EASE Archaeology at the Links of Noltland, Westray. These may have been used to tie mooring ropes onto, to help hold the roof on.

The archaeologists working on site uncovered the carved stones scattered around a hearth within the remains of an enigmatic structure that contained three cists, two hearths and a partial ring of holes packed with broken off upstanding stones. Three of the roughly carved figures were also important enough to the people who used the building to be incorporated within the structure of one of the hearths and in the foundations of one of the standing stones. The purpose of the building and how it was used by the inhabitants of this site four thousand years ago is still an enigma.

Dating the necked stones firmly will require further work, since they have also been found on Iron Age sites in Orkney. On initial evidence, the ones from Finstown possibly date to around the Late Neolithic or Early Bronze Age, roughly 2000 BC. Identifying the purpose of these stones, and if they are figurines, will also require further work, with a close study for abrasion, wear and any other marks on these anthropomorphic objects.

Professor Colin Richards from the University of the Highlands and Islands Archaeology Institute said, “This is a significant discovery in Orkney and  probably within North West Europe. It is very rare to find representations of people in prehistoric Orkney and when found, they are usually individual or in very small groups. If they are figurines, to find nine figures within one structure is very exciting and together with the archaeology found at this site has the potential to add to our understanding of Orcadian society in prehistory.”

The ORCA Archaeology team were also intrigued to uncover direct signs of people working the land some four thousand years ago. In one of the trenches, long marks were found cut into the clay subsoil, which were made by ards (stone plough shares) providing us with evidence for prehistoric farming in Orkney. These forms of prehistoric ploughs were constructed of wood with a stone shaped into a rough point placed into the wood to plough the soil ready for planting. The lines cross each other at various angles further suggesting that the ground was cultivated by intensively criss-crossing with the ard point by these early Orkney farmers.

The survival of these marks together with the remnants of the Early Neolithic and Bronze Age settlement structures gives us an insight into the prehistoric use of this site over some two thousand years with people living, farming and burying their dead across this windswept hillside.

Pete Higgins ORCA Archaeology Project Manager continues, “This collaborative project with SSEN gives us the opportunity to examine an important prehistoric site that would otherwise not have been excavated. The exploratory trenches are now recorded and covered over, while the significant artefacts are now cleaned and stored for future study. Discussions will take place on the next steps for the development.”

SSEN Environmental Project Manager, Simon Hall said, “We have been working closely with ORCA Archaeology for the past 18 months while they have undertaken archaeological work at our substation site near Finstown . We are delighted that the team have been able to make such a significant find at the site, hopefully furthering the understanding of Orkney’s rich heritage. We will continue to work closely with ORCA Archaeology and all relevant bodies to ensure this find is appropriately managed for the people of Orkney.”

The substation is a critical component of the proposed network reinforcement, which is required to support renewable electricity generators across Orkney looking to connect to the main GB transmission system for the first time.  Its progress, as well as that of the reinforcement programme, remains subject to all planning and regulatory approvals.