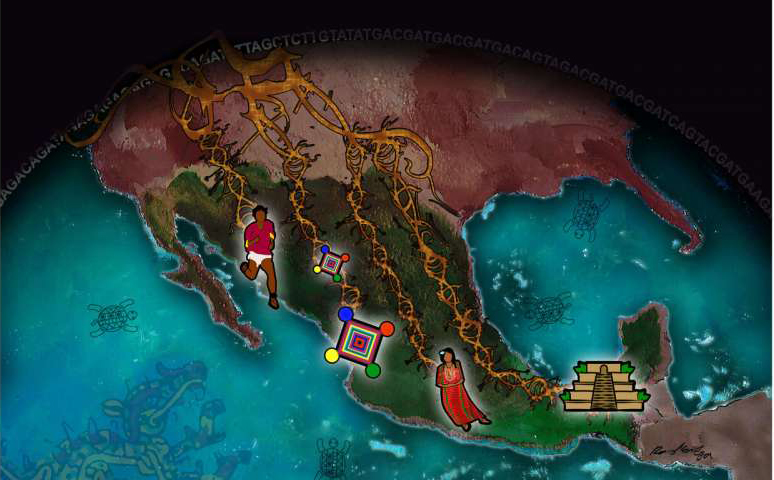 Recent highlights from the journal Molecular Biology and Evolution

As more and more large-scale human genome sequencing projects get completed, scientists have been able to trace with increasing confidence both the geographical movements and underlying genetic variation of human populations.

Most of these projects have favored the study of European populations, and thus, have been lacking in representing the true ethnic diversity across the globe.

To better understand the broad demographic history of pre-Hispanic Mexico and to search for signatures of adaptive evolution, an international team led by Mexican scientists have sequenced the complete protein-coding regions of the genome, or exomes, of 78 individuals from five different indigenous groups from Northern (Rarámuri or Tarahumara, and Huichol), Central (Nahua), South (Triqui, or TRQ) and Southeast (Maya, or MYA) Mexico. The genomic study, the largest of its kind for indigenous populations from the Americas, appeared recently in the advanced online edition of Molecular Biology and Evolution.

“We modeled the demographic history of indigenous populations from Mexico with northern and southern ethnic groups (Tarahumara and Huichol) splitting 7.2 kya and subsequently diverging locally 6.5 kya (Huichol groups) and 5.7 kya (Triqui and Maya), respectively,” said lead author Maria Ávila-Arcos, of the National Autonomous University of Mexico. The Nahua were excluded from the final analysis due to the noise it brought to the overall analysis.

Overall, they identified 120,735 single nucleotide variants (SNV) among the individuals studied, which were used to trace back the population history. Furthermore, they were able to reconcile their data with the demographic history and fossil records of ancestral Native Americans.

“This suggests that, by that time, the ancestral population of MYA was not yet genetically differentiated from others, so our estimates of northern/southern split at 7.2 KYA and Mayan/Triqui divergence at 5.7 KYA fit with this scenario.”

Next, they scanned the data to identify candidate genes most important for adaptation.

“Interestingly, some of these genes had previously been identified as targets of selection in other populations,” said co-corresponding author Andrés Moreno Estrada, principal investigator at National Laboratory of Genomics for Biodiversity (LANGEBIO) – UGA, CINVESTAV.

These genes include SLC24A5, involved in skin pigmentation, and FAP, which was previously suggested to be under adaptive archaic introgression in Peruvians and Melanesians. Three genes were involved in the immune response. These include SYT5, implicated in innate immune response, and interleukins IL17A and IL13. The remaining candidate genes were involved in signal transduction (MPZL1), protein localization and transport (GRASP and ARFRP1), cell differentiation and spermatogenesis (GMCL), Golgi apparatus organization (UBXN2B), neuron differentiation (MANF), signaling and cardiac muscle contraction (ADRBK1), cell cycle (CDK5), microtubule organization and stabilization (NCKAP5L), and stress fiber formation (NCKIPSD).

A couple of genes stood out for the team. These included, BCL2L13, which is highly expressed in skeletal muscle and could be related to physical endurance, including high endurance long-distance running, a well-known trait of the northern Mexico Rarámuri. The KBTBD8 gene has been associated with idiopathic short stature (also found in Koreans) and the team found it to be highly differentiated in Triqui, a southern indigenous group from Oaxaca whose height is extremely low compared to other Native populations.

“We carried out the most comprehensive characterization of potentially adaptive functional variation in Indigenous peoples from the Americas to date,” said Moreno Estrada. “We identified in these populations over four thousand new variants, most of them singletons, with neutral, regulatory, as well as protein-truncating and missense annotations. The average number of singletons per individual was higher in Nahua (NAH) and Maya (MYA), which is expected given these two Indigenous groups embody the descendants of the largest civilizations in Mesoamerica, and that today Nahua and Maya languages are the most spoken Indigenous languages in Mexico. Furthermore, the generated data also allowed us to propose a demographic model inferred from genomic data in Native Mexicans and to identify possible events of adaptive evolution in pre-Columbian Mexico.”