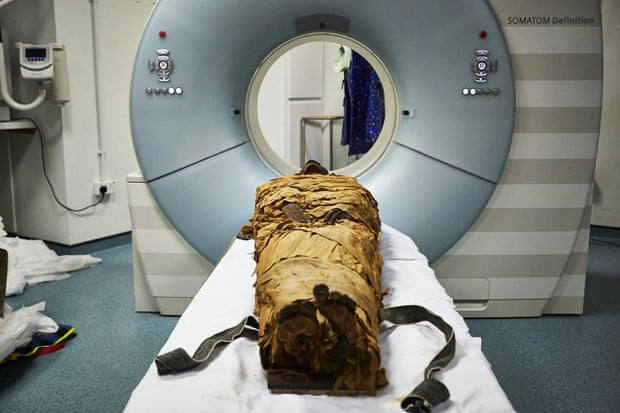 Egyptian mummy gets its voice back

An Egyptian mummy got its voice back, after researchers produced and used a 3D version of its vocal tract.

Researchers in the UK achieved to reproduce the voice of Nesyamun, an ancient Egyptian priest whose mummy is kept in Leeds City Museum. According to a recent paper published in the journal Scientific Report, a research team headed by D.M. Howard (Royal Holloway, University of London) carried a number of CT scans on the mummy at Leeds General Infirmary. These scans became the basis for the digital reconstruction and then 3D printing of Nesyamun’s vocal tract — the very part of human body responsible for making everyone’s voice unique .

The task was difficult. Mummification and time had altered the shape of Nesyamun’s mouth and throat; the team had to virtually reconstruct the priest’s missing soft palate and shrunk tongue in order to allow for a result that would be closer to a living person’ s oral cavity. Finally, the team joined what they came up with to an electronic larynx and loudspeaker.

And then, there was sound.

Still, researchers state that “this acoustic output is for the single sound for the extant vocal tract shape; it does not provide a basis for synthesising running speech. To do so would require knowledge of the relevant vocal tract articulations, phonetics and timing patterns of his language”.

What was possible, however, was for researchers to measure the dimensions of Nesyamun’s larynx and vocal tract and compare them with relevant data and recordings of modern men. What they found was remarkable: according to Howard, Nesyamun’s voice would be slightly higher pitched than the one of the average man today!

The story of Nesyamun’s mummy has already been interesting. In 1824 the body was unwrapped, allowing researchers to find out that Nesyamun had died in his 50’s, probably by an allergic reaction to an insect bite. Then, the mummy was moved from the museum shortly before Leeds’ bombing by the Nazis in 1941, escaping the fate of the other artifacts in its museum.