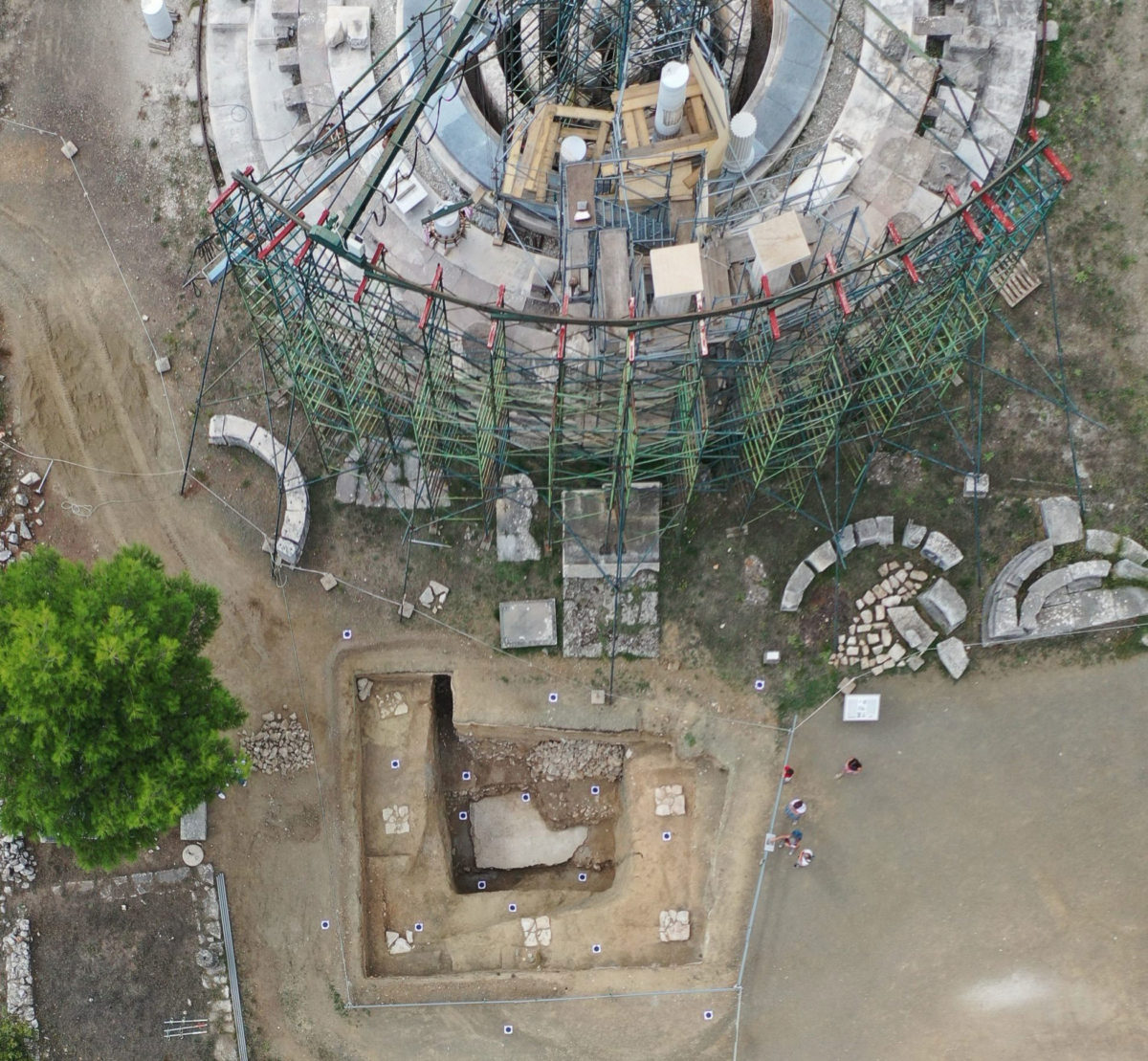 Especially regarding its early years

A new building found at Epidaurus’ Asklepieion gives new insights into the famous ancient sanctuary, especially regarding its early years. To date it is an unknown building of the Archaic era, built on the site where later, in the 4th century BC, the Tholos was erected; the most iconic building of the Asklepieion.

The building, rectangular in plan, had a basement space corresponding to the ground floor with a mosaic floor and a peristyle on the ground floor. According to present data of the excavation, which is in progress, the building dates to around 600 BC. “This means that the cult of Asclepius appears to begin earlier in the Asklepieion of Epidaurus. Until now, it was believed to have begun around 550 BC, i.e. in the middle of the 6th century BC. Now it goes back in time and this is especially important for the sanctuary’s history and for the history of Asclepius himself”, Professor Vassilis Lambrinoudakis, head of the excavations of the University of Athens at Ancient Epidavros, told the Athens and Macedonia News Agency/AMNA. The professor, along with his associates Alexandra Sfyroera and Vangelis Kazolias, will present the results of the excavation work to date on Monday, February 3, 2020, at 19:00, at the “Alkis Argyriadis” Amphitheater in the main building of the University of Athens (30 Panepistimiou Str). The lecture title is “Excavations at the Epidaurus Asklepieion: The unearthing of an earlier building of the Tholos”.

What exactly was found? “At the site where the Tholos was later built, part of a building has been found, a ‘double’ building with a basement and ground floor. Because it had a basement, like the Tholos, we consider it to be a forerunner of this ‘mystic’ building called the Tholos”, says Mr. Lambrinoudakis to the AMNA. “When it was decided to construct the Tholos, this earlier building was demolished. The empty space created by its basement was filled with remnants from the old building, but also from other parts of the sanctuary. In other words, because a great project of the 4th century BC was beginning, some other buildings were also demolished, whose materials were reverently buried at this site,” he adds.

But what was the Tholos? “It is a name given by the ancient traveler Pausanias in the 2nd century. AD. Its original name, as we know it from inscriptions of the 4th century BC  was Thymeli. This was a kind of altar, in which bloodless offerings were made, as was the custom when sacrificing to chthonic deities”. He explains that research has concluded that the Tholos was a kind of underground dwelling place of Asclepius, where patients were treated by sleeping there. That is, the patient who was sleeping in this special place dreamt of the god Asclepius himself revealing to him/her the cure for his/her illness. “This earlier building had a function similar to that of the Tholos, i.e. its basement served as the seat of the chthonic Asclepius underground”, says the head of the excavations. The new building, however, also gives important clues on the sanctuary’s topography. “It explains the orientation of some later constructions,” he concludes.

Excavations at the Asklepieion sanctuary of Epidaurus have been conducted by the Department of Archaeology and Art History of the Department of History and Archaeology of the University of Athens since 2016 and are ongoing. The excavation being carried out with the constant support of the Ephorate of Antiquities of Argolis and was funded by the “Asclepiades” company in 2016-2017 and the Stavros Niarchos Foundation in 2018-2019.