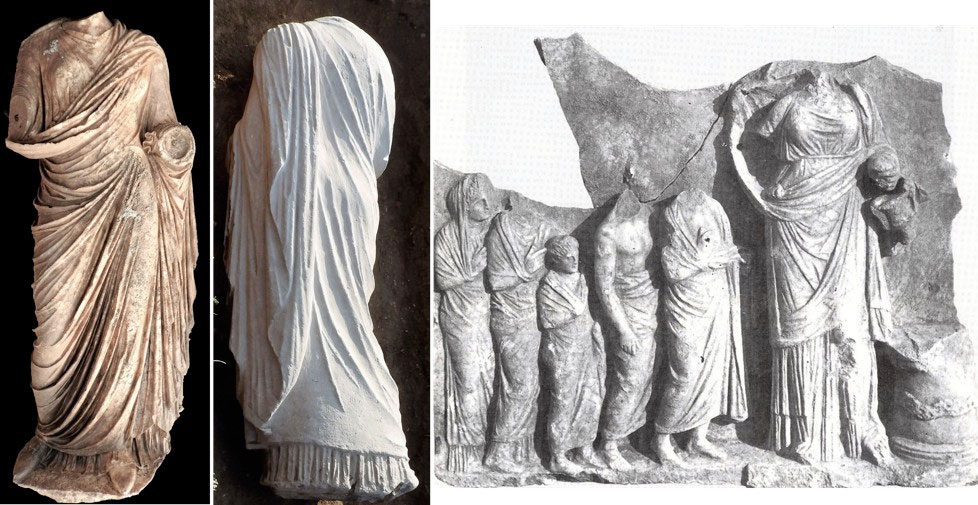 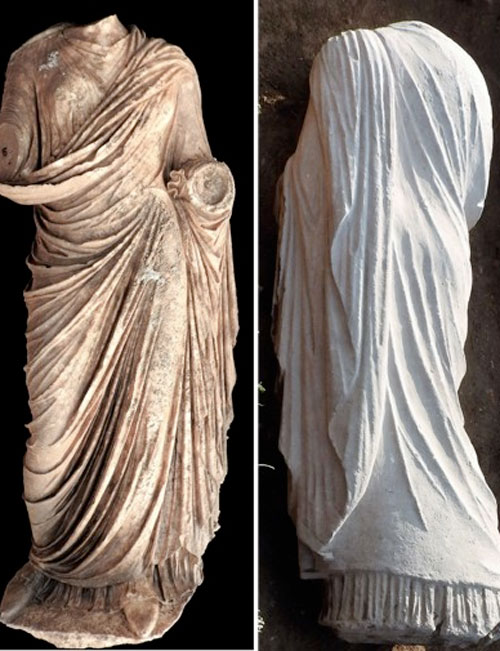 At the site of the Agora

Οn Thursday, December 16, 2021, an important find came to light in the agora of ancient Epidaurus. A very good quality life-size marble female statue. The statue was found intact, with the exception of the arms, which would have been additional, and the head, which had probably broken during its fall.

The Ministry of Culture and Sports announced that after the end of this year’s excavation period and following the recent heavy rain, a small section of the statue’s back was revealed in that part of the enclosure where work have not yet been conducted on deeper layers. In consultation with Head of the Argolis Ephorate of Antiquities Alkistis Papadimitriou and her staff, the area was immediately excavated under the supervision of the Ephorate’s civil engineer Ev. Kazolia and the site’s excavator V. Lambrinoudakis.

The statue depicts a woman wearing a full length chiton and a himation. The himation was fastened to the left shoulder and arm, from where it hung in rich folds. One end of it folded round the back under the right armpit and was draped at an angle over the left shoulder. In place of the right arm, surfaces that retain the joins from additional parts show that the figure was making a gesture of discovery, i.e. lifting the mantle with the right hand outwards and upwards, typical of married women in antiquity and a characteristic gesture of Hygeia, goddess of Health, the wife or daughter of Asclepius. A first assessment places the work in imperial Roman times. The statue was transferred to a warehouse in the Asclepieion for storage, cleaning and conservation.

A systematic excavation has been conducted at the site since 2015 by a research team from the University of Athens with the financial support of the Ioannis S. Latsis Public Benefit Foundation. Near the ancient city’s theatre (today’s “small theatre of Epidaurus”), situated in the ancient agora, an important fountain building has been unearthed, with an adjacent enclosure of the 4th c. BC which in Roman times acquired a new appearance with the addition of a portico to the west and a vaulted building on the north side. Evidence has emerged leading to the identification of this complex with the sanctuary of Asclepius in the city of Epidaurus as mentioned by Pausanias.