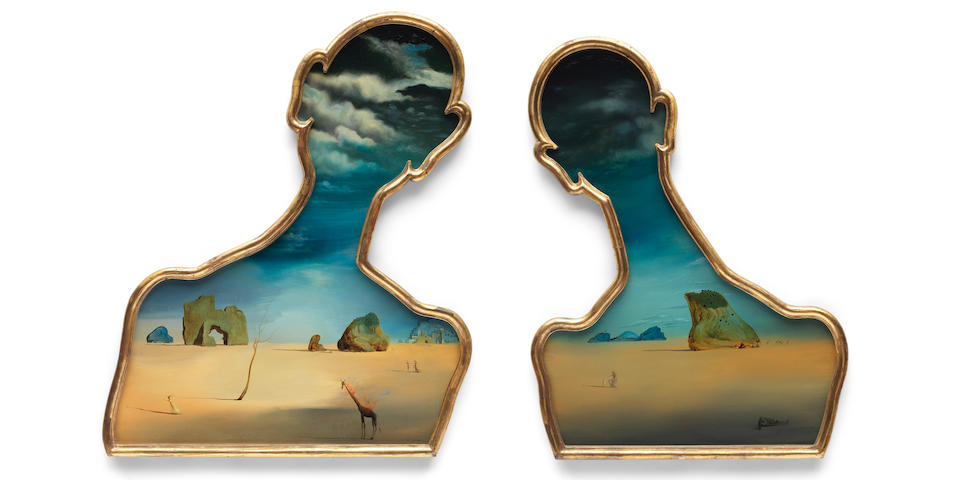 In London on 26 March

A surrealist masterpiece by Salvador Dalí, Couple aux têtes pleines de nuages (1937), will lead Bonhams Impressionist and Modern Art Sale in London on 26 March. The work, which has never before been offered at auction, comes from the collection of the Italian Modernist composer Giacinto Scelsi. It has an estimate of £7,000,000 – 10,000,000.

Dalí created Couple aux têtes pleines de nuages (1937) during the Spanish Civil War and at the height of his surrealist period (1929-1939). The work depicts Dalí and his wife Gala formed only by the outlines of the frames. Despite being a diptych, the panels feature a desert landscape that appears to merge into a single larger painting. Classic surrealist motifs – scattered rocks, a disfigured tree, indistinct human figures, a girl skipping, a giraffe on fire, and clouds that cut across the heads of the panels – populate the scene. All of these images relate to certain Freudian undercurrents often seen in Dalí’s key surrealist works.

India Phillips, Global Head of Bonhams Impressionist and Modern Art department, commented: “Dalí’s Couple aux têtes pleines de nuages (1937) is a masterpiece from the height of his key surrealist period. It is full of the highly personal imagery that made Dalí perhaps the most exciting member of the Surrealist group during these years of experimentation, revealing his obsession with Freudian psychology as much as his obsession with his great lover and muse Gala. While the now-famous image of the girl skipping was employed by Dalí to symbolize childhood memories, the burning giraffe represents “the masculine cosmic apocalyptic monster” – a timely premonition of war. Dalí painted these monumental panels at a time of intense personal discovery and expression, while the world around him erupted into conflict. Simply put, it is one of the most exciting works by Dalí ever to come to the market.”

Dalí joined the Surrealist movement in Paris in 1929, the same year he met Gala, who at that time was married to Dalí’s friend, the Surrealist poet and founder of the movement Paul Éluard. Dalí and Gala’s 50-year relationship was controversial. Gala was ten years his senior, and many saw her as the force behind the increased commercialization of Dalí’s work after his rejection of Surrealism in 1939. Such was Dalí’s adoration for his partner and muse that he signed many of his most significant works, including Couple aux têtes pleines de nuages (1937), ‘Gala Salvador Dalí’.

The work was part of the collection of the Italian composer Giacinto Scelsi (1905-1988), where it remained for more than half a century. Prior to it becoming part of Scelsi’s collection, it is possible Dalí gave the work to Paul Éluard. Scelsi, in turn, was an associate of the Surrealist circle from his time studying in Paris in the 1920s. Subsequently, he had spent time with Salvador and Gala Dalí in Rome, during the couple’s travels in Italy with Edward James at the end of the 1930s.

The work featured in the exhibition Dalí / Duchamp at The Royal Academy in 2018. A related double portrait of the same title, executed in 1936, is now permanently exhibited in the Boijmans van Beuningen Museum in Rotterdam.