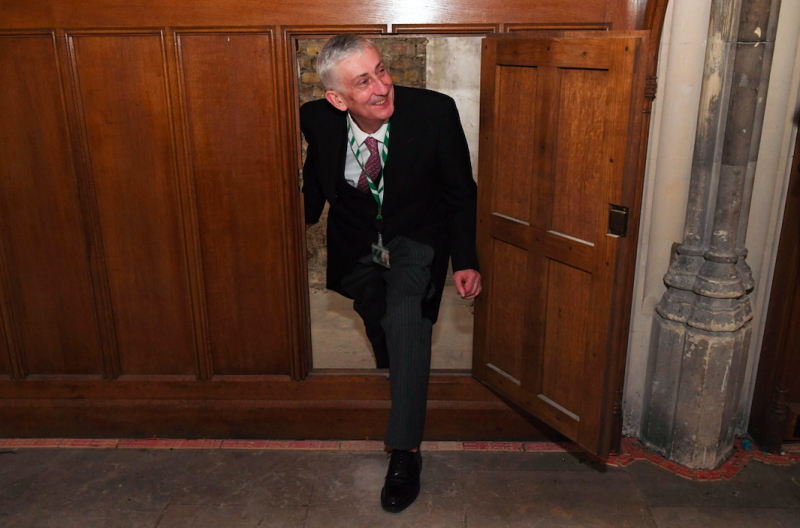 Secret doorway rediscovered in the House of Commons

Created for the procession to the Coronation banquet of Charles II

A secret doorway, created for the procession to the Coronation banquet of Charles II, has been rediscovered in the House of Commons.

For centuries, the entrance would have been used by great political luminaries, such as the diarist Samuel Pepys, the first de facto Prime Minister of Great Britain – Robert Walpole – and arch-rivals Charles James Fox and William Pitt the younger.

While a brass plate marks where the doorway had once been in Westminster Hall, historians believed it had been filled-in following reconstruction work after the palace was bombed during the Second World War.

However, following recent investigative work by Parliament’s Architecture and Heritage Team working on research for the Palace of Westminster’s Restoration and Renewal Programme, the passage has been rediscovered.

House of Commons Speaker, Sir Lindsay Hoyle, was the first senior Member to visit the find. He said: “To think that this walkway has been used by so many important people over the centuries is incredible.

“I am so proud of our staff for making this discovery and I really hope this space is celebrated for what it is: a part of our parliamentary history.”

Mark Collins, Parliament’s Estates Historian, said he and his colleagues had been on a high ever since the discovery. He added: “To say we were surprised is an understatement – we really thought it had been walled-up forever after the war.”

Liz Hallam Smith, the team’s historical consultant from the University of York, said: “We were trawling through 10,000 uncatalogued documents relating to the palace at the Historic England Archives in Swindon, when we found plans for the doorway in the cloister behind Westminster Hall.

“As we looked at the paneling closely, we realised there was a tiny brass key-hole that no-one had really noticed before, believing it might just be an electricity cupboard.

“Once a key was made for it, the paneling opened up like a door into this secret entrance.”

In what looks like a little room, the team discovered the original hinges for two wooden doors 3 ½ meters high that would have opened into Westminster Hall.

There was also graffiti from bricklayers who helped Sir Charles Barry restore the palace following the fire of 1834.

One vivid piece of wall writing left by men who helped block the passageway on both sides in 1851 read: “This room was enclosed by Tom Porter who was very fond of Ould Ale.”

Mark Collins went on to say: “It’s quite incredible how this writing has survived and can be read so easily, despite having been scribbled in pencil.

“We would love to hear from any descendants of Tom Porter or his colleagues and invite them to see where their relatives once worked.”

Signing off as “Real Democrats” suggests the group were part of the working class male suffrage Chartist movement, which called for reforms including: allowing every man aged 21 to have a vote, and for would-be MPs to stand even if they did not have property, he said.

There was another surprise for the team when they entered the passageway – they were able to light the room.

A switch – probably installed in the 1950s following restoration work after the Second World War – not only worked but illuminated a large Osram bulb marked ‘HM Government Property’.

Dr Collins said further investigations made him certain the doorway dated back at least 360 years.

Dendrochronology testing revealed that the ceiling timbers above the little room dated from trees felled in 1659 – which tied in with surviving accounts that stated the doorway was made in 1660-61 for the coronation banquet of Charles II.

Research showed the route was used by part of the procession which passed from the old House of Lords into the hall where the king and queen were seated.

Thereafter, the doorway was used at subsequent coronations, by the Speaker’s procession and day-to-day by MPs to access the original Commons chamber.

Dr Collins said the plans that pointed the team to this latest reveal would now be digitised as part of the Restoration and Renewal programme, so that the doorway would never disappear again.

“The mystery of the secret doorway is one we have enjoyed discovering – but the palace no doubt still has many more secrets to give up.

“We hope to share the story with visitors to the palace when the building is finally restored to its former glory, so it can be passed on down the generations and is never forgotten again.”