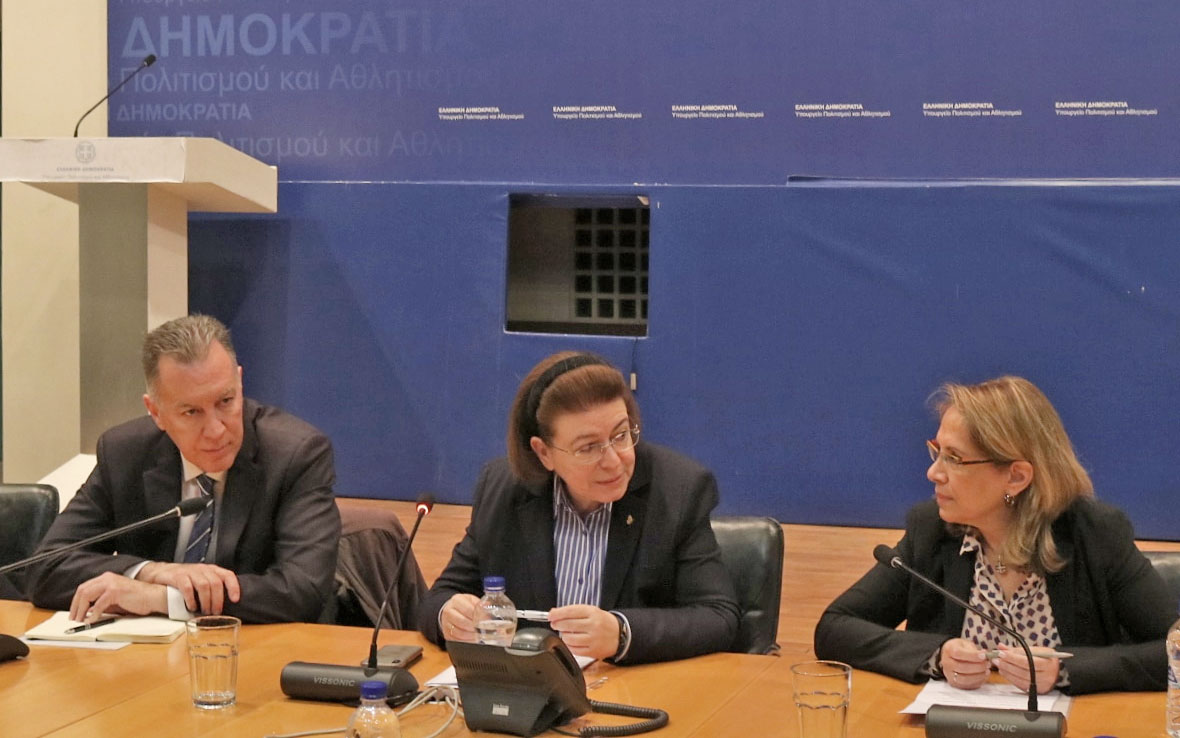 Panagiotis Dais appointed as new Chair of the Board of Directors

The large scope for increasing archaeological funds, the extension of e-tickets, as well as the organization chart of the Archaeological Receipts and Expropriations Fund to be discussed in public with the employees, were the topics presented by Minister of Culture Lina Mendoni at a press conference.

Accompanied by the new Chair of the Fund’s Board of Directors Panagiotis Dais and the outgoing Chair Athena Hadjipetrou (now President of the Development Bank), Lina Mendoni said characteristically: “We always said that the tickets in Greece take up 95% of the revenue while in the rest of the world the percentage does not exceed 20%, with the rest of the revenue coming in from services provided. These are just the services we wish to upgrade, starting with the refreshment areas of archaeological sites and museum shops”.

She used Ancient Olympia as an example to highlight the disproportionately low revenue from the sales of its museums compared to its visitors: “In 2019, the refreshment area not being in use, revenue from the two museum shops was 188.000 euros in a total of 650.000 visitors, of which 100.000 visitors had free entrance (schools, etc.). This amounts to under 0.50 euros per visitor.” Regarding the refreshment areas ,out  of the 15 to be auctioned, one is in Ancient Olympia, for which a competition was held last Friday with ten candidates so far, the minister said: “It’s a process started by Mrs Chatzipetrou and will continue with Mr Dais, so that by April there will already be people to manage the refreshment areas.”

Concerning the operation of the TAPA, she noted that the Fund remains a Public Legal Entity and that outgoing board of director’s Chair Athena Hatzipetrou “formally submitted to the Ministry of Culture in mid-February 2020 the proposal to restructure the Fund’s services and this process will continue through a consultation which must take place with the employees, so it, the restructuring, can be established by law.”

Lastly, the Minister of Culture announced extending the electronic ticket to archaeological sites and museums, a measure that had been launched in 2018. “We have had the necessary consultations with both the original sponsors — the National Bank and the Stavros Niarchos Foundation. There is a new $300,000 sponsorship from the Onassis Foundation and at the same time we have already consulted with the Ministry of Digital Governance to extend the ticket through PPPs (Public-Private Partnerships) to all archaeological sites with the collaboration of the Ministry of Culture, the Ministry of Digital Governance and the Information Society,” concluded the Minister.