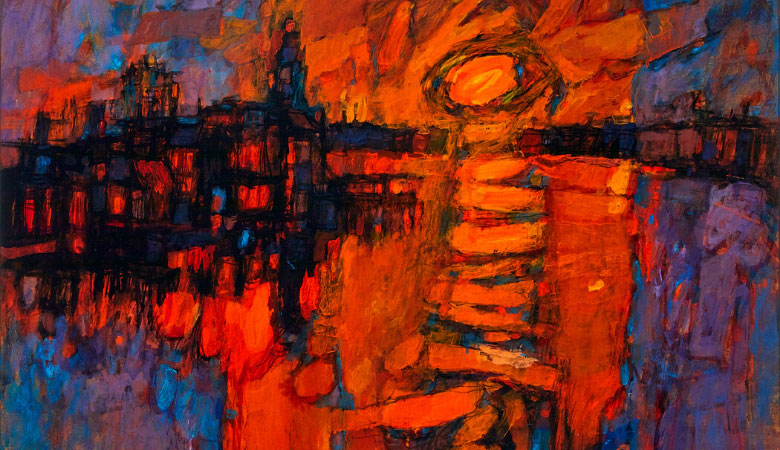 Due to coronavirus pandemic

The exhibition entitled “Alfred Cohen: an American Artist in Europe”, at Bush House in King’s College, London, being prepared for many years now, opened and closed on the same day due to the coronavirus pandemic.

On March 16, the day restrictive measures came into force in the U.K due to Covid-19, 90 year old Diana Cohen travelled from north Norfolk to London to the opening of the first exhibition these last 20 years of works by her late husband, painter Alfred Cohen.

The exhibition of paintings displayed after 40 years had been scheduled to run for six weeks, after which it was announced that its duration had been limited to one week and then to one day, due to the virus spreading and the university shutting down. The works will remain in place for the duration of the epidemic and can only be seen through a single window, reports The Αrt Newspaper.

In 1949, after graduating from the Art Institute of Chicago, American artist Alfred Cohen (1920-2001) won a scholarship to come to Europe for a year. He never left, studied and lived in Paris and Germany before settling in London in 1960. His successful exhibitions with panoramic breathtaking views of the Thames, of the London docks and Commedia dell’Arte-based figures were an event at the time. Movie stars, directors and producers became collectors of his works. In the mid-1960s he moved to Kent and later to Norfolk and painted British landscapes and the English Channel, portraits and flowers.

The exhibition, organized on the occasion of the 100th anniversary of the painter’s birth, presents the five main phases of his creative life and focuses on how his paintings were in constant dialogue with various key contemporary art movements such as Impressionism, Post-Impressionism, Expressionism and the radical evolution of his style that led to a significant body of work. This is referred to in a synopsis and the exhibition book .

Diane Cohen and her son Max Saunders (Alfred Cohen’s adopted son) collected 50 works for the exhibition from America and the United Kingdom.

The painter’s widow was one of the few who managed to see the complete exhibition.