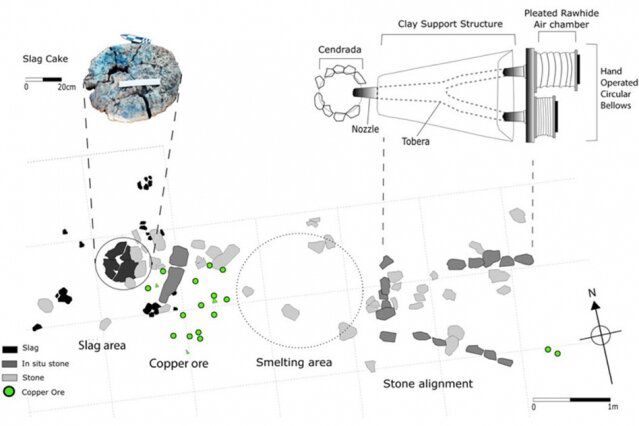 The invaders lacked the knowledge and skills to produce copper

When Spanish invaders arrived in the Americas, they were generally able to subjugate the local peoples thanks, in part, to their superior weaponry and technology.

But archeological evidence indicates that, in at least one crucial respect, the Spaniards were quite dependent on an older indigenous technology in parts of Mesoamerica (today’s Mexico, Guatemala, Belize, and Honduras).

The invaders needed copper for their artillery, as well as for coins, kettles, and pans, but they lacked the knowledge and skills to produce the metal. Even Spain at that time had not produced the metal domestically for centuries, relying on imports from central Europe. In Mesoamerica they had to depend on local smelters, furnace builders, and miners to produce the essential material. Those skilled workers, in turn, were able to bargain for exemption from the taxes levied on the other indigenous people.

This dependence continued for at least a century, and perhaps as long as two centuries or more, according to new findings published in the journal Latin American Antiquity, in a paper by Dorothy Hosler, professor of archeology and ancient technology at MIT, and Johan Garcia Zaidua, a researcher at the University of Porto, in Portugal.

The research, at the site of El Manchón, in Mexico, made use of information gleaned from more than four centuries worth of archeological features and artifacts excavated by Hosler and her crew over multiple years of fieldwork, as well as from lab work and historical archives in Portugal, Spain, and Mexico analyzed by Garcia.

El Manchón, a large and remote settlement, initially displayed no evidence of Spanish presence. The site consisted of three steep sectors, two of which displayed long house foundations, some with interior rooms and religious sanctuaries, patios, and a configuration that was conceptually Mesoamerican but unrelated to any known ethnic groups such as the Aztec. In between the two was an area that contained mounds of slag (the nonmetallic material that separates out during smelting from the pure metal, which floats to the surface).

The Spanish invaders urgently needed enormous quantities of copper and tin to make the bronze for their cannons and other armaments, Hosler says, and this is documented in the historical and archival records. But “they didn’t know how to smelt,” she says, whereas archaeological data suggest the indigenous people had already been smelting copper at this settlement for several hundred years, mostly to make ritual or ceremonial materials such as bells and amulets. These artisans were highly skilled, and in Guerrero and elsewhere had been producing complex alloys including copper-silver, copper-arsenic, and copper-tin for hundreds of years, working on a small scale using blowpipes and crucibles to smelt the copper and other ores.

But the Spanish desperately required large quantities of copper and tin, and in consultation with indigenous smelters introduced some European technology into the process. Hosler and her colleagues excavated an enigmatic feature that consisted of two parallel courses of stones leading toward a large cake of slag in the smelting area. They identified this as the remains of a thus-far-undocumented hybrid type of closed furnace design, powered by a modified hand-held European bellows. A small regional museum in highland Guerrero illustrates just such a hybrid furnace design, including the modified European-introduced bellows system, capable of producing large volumes of copper. But no actual remains of such furnaces had previously been found.

The period when this site was occupied spanned from about 1240 to 1680, Hosler says, and may have extended to both earlier and later times.

The Guerrero site, which Hosler excavated over four field seasons before work had to be suspended because of local drug cartel activity, contains large heaps of copper slag, built up over centuries of intensive use. But it took a combination of the physical evidence, analysis of the ore and slags, the archaeological feature in the smelting area, the archival work, and reconstruction drawing to enable identification of the centuries of interdependence of the two populations in this remote outpost.

Earlier studies of the composition of the slag at the site, by Hosler and some of her students, revealed that it had formed at a temperature of 1150 degrees Celsius, which could not have been achieved with just the blowpipe system and would have required bellows. That helps to confirm the continued operation of the site long into the colonial period, Hosler says.

Years of work went into trying to find ways to date the different deposits of slag at the site. The team also tried archaeomagnetic data but found that the method was not effective for the materials in that particular region of Mexico. But the written historical record proved key to making sense of the wide range of dates, which reflected centuries of use of the site.

Documents sent back to Spain in the early colonial period described the availability of the locally produced copper, and the colonists’ successful tests of using it to cast bronze artillery pieces. Documents also described the bargains made by the indigenous producers to gain economic privileges for their people, based on their specialized metallurgical knowledge.

Hosler says that “what’s so interesting to me is that we were able to use traditional archeological methods and data from materials analysis as well as ethnographic data” from the furnace in a museum in the area, “and historical and archival material from 16th century archives in Portugal, Spain, and Mexico, then to put all the data from these distinct disciplines together into an explanation that is absolutely solid.”