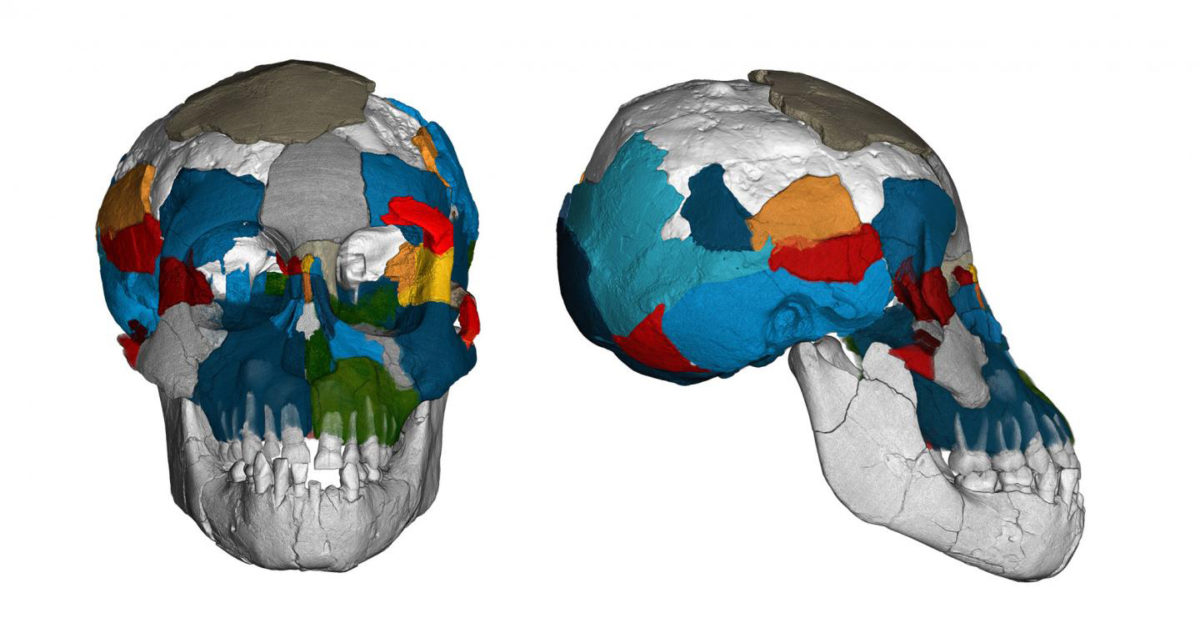 Lucy had an ape-like brain

The species Australopithecus afarensis inhabited East Africa more than three million years ago, and occupies a key position in the hominin family tree, as it is widely accepted to be ancestral to all later hominins, including the human lineage. “Lucy and her kind provide important evidence about early hominin behavior. They walked upright, had brains that were around 20 percent larger than those of chimpanzees, may have used sharp stone tools,” explains senior author Zeresenay Alemseged from the University of Chicago, who directs the Dikika field project in Ethiopia, where the skeleton of an Australopithecus child was found in the year 2000. “Our new results show how their brains developed, and how they were organized,” adds Alemseged.

To study brain growth and organization in Australopithecus afarensis the researchers scanned the fossil cranium of the Dikika child using synchrotron microtomography at the European Synchrotron Radiation Facility (ESRF) in Grenoble, France. With the help of this state-of the-art technology researchers can reveal the age at death with a precision of a few weeks.

These data shed new light on two questions that have been controversial: Is there evidence for human-like brain reorganization in Australopithecus afarensis? Was the pattern of brain growth in A. afarensis more similar to that of chimpanzees or that of humans?

Contrary to previous claims, the endocranial imprints of Australopithecus afarensis reveal an ape-like brain organization, and no features derived towards humans. However, a comparison of infant and adult endocranial volumes nevertheless indicates more human-like protracted brain growth in Australopithecus afarensis, likely critical for the evolution of a long period of childhood learning in hominins.

The brains of modern humans are not only much larger than those of our closest living ape relatives, they are also organized differently, and take longer to grow and mature. For example, compared with chimpanzees, modern human infants learn longer at the expense of being entirely dependent on parental care for longer periods of time. Together, these characteristics are important for human cognition and social behavior, but their evolutionary origins remain unclear. Brains do not fossilize, but as the brain grows and expands before and after birth, the tissues surrounding its outer layer leave an imprint in the bony braincase. Based on these endocasts the researchers could measure endocranial volume, and infer key aspects of brain organization from impressions of brain convolutions in the skull.

A key difference between apes and humans involves the organization of the brain’s parietal and occipital lobes. “In all ape brains, a well-defined lunate sulcus approximates the anterior boundary of the primary visual cortex of the occipital lobes,” explains co-author Dean Falk from Florida State University, a specialist in interpreting endocranial imprints. Some have previously argued that structural changes of the brain resulted in a more backwards (human-like) placement of the lunate sulcus on endocasts of australopiths, and eventually to the disappearance of a clear endocranial impression in humans. Hypothetically, such brain reorganization in australopiths could have been linked to behaviors that were more complex than those of their great ape relatives (e.g., tool manufacture, mentalizing, and vocal communication). Unfortunately, the lunate sulcus typically does not reproduce well on endocasts, so there is unresolved controversy about its position in australopiths.

The exceptionally well preserved endocast of the Dikika child has an unambiguous impression of a lunate sulcus in an ape-like position. Likewise, the computed tomographic scans reveal a previously undetected impression of an ape-like lunate sulcus in a well-known fossil of an adult Australopithecus individual from Hadar (A.L. 162-28). Contrary to previous claims, the researchers did not find evidence for brain reorganization in any Australopithecus afarensis endocast that preserves detailed sulcal impressions.

“After seven years of work, we finally had all the puzzle pieces to study the evolution of brain growth,” says lead author Philipp Gunz: “The age at death of the Dikika child and its endocranial volume, the endocranial volumes of the best-preserved adult Australopithecus afarensis fossils, and comparative data of more than 1600 modern humans and chimpanzees.”

The pace of dental development of the Dikika infant was broadly comparable to that of chimpanzees and therefore faster than in modern humans. However, given that the brains of Australopithecus afarensis adults were roughly 20 percent larger than those of chimpanzees, the Dikika child’s small endocranial volume suggests a prolonged period of brain development relative to chimpanzees. “Even a conservative comparison of the Dikika infant to small-statured and small-brained adults like Lucy, suggests that brain growth in Australopithecus afarensis was protracted as in humans today,” explains Simon Neubauer.

“Our data show that Australopithecus afarensis had an ape-like brain organization, but suggest that these brains developed over a longer period of time than in chimpanzees,” concludes Philipp Gunz. Among primates in general, different rates of growth and maturation are associated with different infant-care strategies, suggesting that the extended period of brain growth in Australopithecus afarensis may have been linked to a long dependence on caregivers. Alternatively, slow brain growth could also primarily represent a way to spread the energetic requirements of dependent offspring over many years in environments where food is not abundant. In either case the protracted brain growth in Australopithecus afarensis provided a basis for subsequent evolution of the brain and social behavior in hominins, and was likely critical for the evolution of a long period of childhood learning.