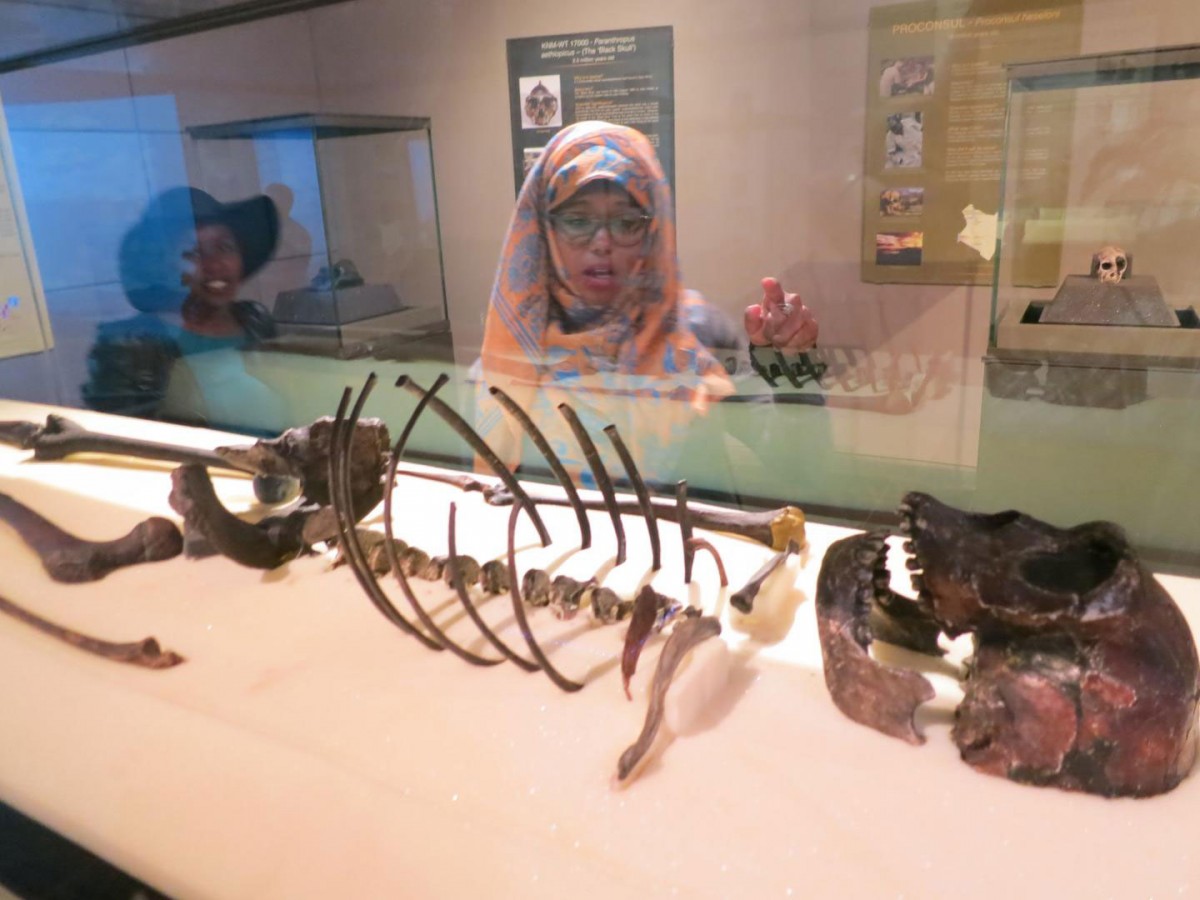 A 24-million-year record of African plants plumbs deep past

Buried deep in seabed sediments off east Africa, scientists have uncovered a 24-million-year record of vegetation trends in the region where humans evolved. The authors say the record lends weight to the idea that we developed key traits—flexible diets, large brains, complex social structures and the ability to walk and run on two legs—while adapting to the spread of open grasslands. The study appeared on June 6 in a special human-evolution issue of the journal Proceedings of the National Academy of Sciences.

Based on genetic evidence, the earliest hominins, or human ancestors, are thought to have split off from chimpanzees some 6 million to 7 million years ago. Many scientists have argued that they were set on the path to become modern humans as east Africa’s vegetation gradually shifted from dense forest to savanna—open grasslands punctuated by woodland patches and rivers. This would have forced our ancestors to descend from the trees, move rapidly over open ground, and develop social skills needed for survival. In recent years, the long-held notion that humans evolved in grasslands alone has given way to a more nuanced view, that it was the increasing diversity of such landscapes including the grasses that led to the success of the hominins who were smartest and most flexible at adapting to a changing world.

The new study supplies by far the longest and most complete record of ancient plant life in much of what is now Ethiopia and Kenya, the assumed birthplace of humanity. It strongly suggests that between 24 million and 10 million years ago—long before any direct human ancestors appeared—there were few grasses, and woodlands thus presumably dominated. Then, with an apparent shift in climate, grasses began to appear. The study shows that the trend continued through all known human evolution, leading to a dominance of grasses by a few million years ago.

“The entire evolution of our lineage has involved us living and working in or near grasslands,” said lead author Kevin Uno, a postdoctoral research scientist at Columbia University’s Lamont-Doherty Earth Observatory. “This now gives us a timeline for the development of those grasses, and tells us they were part of our evolution from the very beginning.” Uno says the grasslands were probably small and patchy at first, and thus were not the only factor. Rather, he, said, it “probably led to a more diverse set of niches we could occupy and compete in successfully.” For instance, he said, one could imagine that in a more open landscape, hominins “would learn how to team up. Some could hunt or scavenge prey. Some could throw stones at the hyenas to keep them away, while someone else would run in and grab the meat.”

Scientists have previously collected plant pollen, chemical isotopes and other evidence from land-based sediments suggesting that grasslands became dominant around the time humans evolved. But these records come only from scattered finds in highly eroded outcrops, and most go back only about 4 million years.

In the new study, the researchers examined a series of sediment cores drilled by a research ship in the Red Sea and the western Indian Ocean, off northeast Africa. The cores contain chemicals created by vegetation on land that were later washed or blown out to sea and laid down in layers for tens of millions of years. “The deep ocean might seem like a funny place to look for signs of vegetation, but it’s one of the best, because everything is buried and preserved. It’s like a bank vault,” said Uno. Using a fairly new technique, Uno and his colleagues analyzed carbon-based chemicals called alkanes, which make up the waxy outer parts of leaves, and contain the fingerprints of different plant types.

Sediments older than 10 million years had alkanes signaling a form of photosynthesis used mainly by woody plants, the so-called C3 pathway. But starting 10 million years ago, a different form linked mainly to grasses—the C4 pathway—began showing up. The area covered by grass seemed to grow 7 or 8 percent every million years, until it apparently dominated by 2 million or 3 million years ago. This kind of vegetation is still the main plant life in east Africa today. Other scientists have shown that grasslands spread also in south Asia, the Americas and southern Africa somewhat later.

Uno says the study data matches chemical analyses of tooth enamel from ancient elephants and other large herbivores showing that some east African animals began switching to more grass-based diets around 10 million years ago. The earliest known hominins appeared several million years later. By 3.8 million years ago, tooth enamel shows they developed a flexible diet, including foods based on grasses—if not the grass itself, presumably meat of creatures that ate grass. A study last year coauthored by Lamont scientist Christopher Lepre showed that hominins were making stone tools in northwest Kenya by 3.3 million years ago. Pronounced elongation of the legs, larger brains and other traits followed, until the emergence of recognizable Homo sapiens—our own species—by about 200,000 years ago.

“Lots of people have conjectured that grasslands had a central role in human evolution,” said study coauthor Peter deMenocal, a climate scientist at Lamont-Doherty. “But everyone has been waffling about when those grasslands emerged and how widespread they were. This really helps answer the question.”

Thure Cerling, a geologist at the University of Utah who has assembled some of the most important land-based African vegetation records, said the study gives an unprecedented “long-term view of the regional vegetation,” and thus the environments in which humans evolved. But, he said, “it will always be hard to associate a cause with an effect.”

Smithsonian Institution anthropologist Richard Potts, another authority in the field, said that the paper “is the very best examination and most compelling demonstration” of long-term grassland expansion.” But he said, “the broad-brush time scale of the analysis appears to miss the details of environmental dynamics on time scales that influence gene pools.” Potts says there is ample evidence from finer-scale studies that even as grasses spread, east Africa’s climate swung from wet to dry over much shorter time periods. These swings became most intense over the last few million years, and he argues that this is the perhaps the real key. Potts says that grasses spread because they were flexible enough to adapt to such swings—as were humans. “Bipedality emerged as a way of combining walking on the ground and climbing trees; toolmaking expanded the adjustments to a much wider range of foods; brains are the quintessential organ of flexibility,” he said. “Geographic expansion requires adaptability to change.”

The other authors of the study are Pratigya Polissar, also of Lamont-Doherty; and Kevin Jackson of Lafayette College.