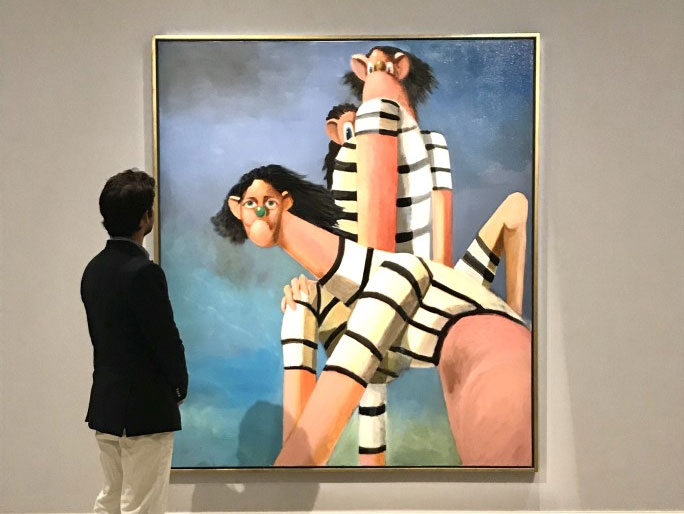 Contemporary Curated Realises the Highest Ever Total for an Online Sale

Sotheby’s eighth edition of ‘Contemporary Curated’ in London realised £5,097,250 / $6,401,127, soaring above its pre-sale estimate of £3,435,900-4,668,500. This is the highest total ever achieved for an online sale at Sotheby’s. 88% of the lots offered were sold, with over half of those exceeding their high estimates. Attracting an average of 12.4 bids for every lot sold, the auction saw competitive bidding through to the final day and in the final seconds.

‘Contemporary Curated’ is one of numerous sales at Sotheby’s that had originally been scheduled as live auctions, but – in light of the current global circumstances – have been converted into an online sale. This is the now the 18th online auction staged at Sotheby’s since the 20th March, which together have realised a total of $37 million (almost half Sotheby’s $80 million annual total for dedicated online sales in 2019).

The sale was led by ‘Antipodal Reunion’, a colossal painting by George Condo from 2005 (Lot 30). Quick fire bids pushed the final total beyond its high estimate to £1,035,000 / $1,299,753, the highest price ever achieved for a painting in an online sale at Sotheby’s. Bearing a striking similarity to Pablo Picasso’s ‘The Bathers’ from 1918, ‘Antipodal Reunion’ is a key example of Condo’s adoption of the Spanish artist’s style and technique, which continues to inspire his oeuvre.

Further highlights: Combining the gaudiness of the 1970s disco movement with the transcendental wonder of religious architecture, Monir Farmanfarmaian’s dazzling ‘Geometry of Hope’ sold for £375,000 / $470,925 – the highest price achieved for her work at any international auction house (Lot 40). In the artist’s debut appearance in a Contemporary sale at Sotheby’s Fahrelnissa Zeid’s abstract study of the moon also realised a starry result, achieving £250,000 / $313,950 after attracting 9 bids (Lot 44).

Statistics on Bidders & Buyers:
· Over a third of buyers were new to Sotheby’s.
· 36% of bidders in the sale were under 40 years old.
· Participants hailed from 36 countries.