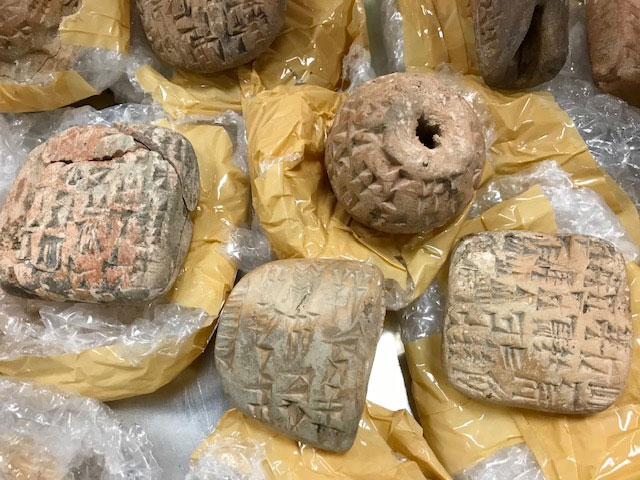 The British Museum, London, recently announced that experts from the Museum helped the British customs authorities reveal as fake the suspicious artefacts found in early July 2019, during a check at London’s Heathrow Airport.

Specifically, 190 items had been found comprising clay figurines, animal-shaped vessels and clay tablets bearing a cuneiform type of script, carefully packaged in two containers originating from Bahrain, with their recipient being a private address in the United Kingdom.

“Suspicions arose almost immediately because it was as if the whole genre of ancient Mesopotamian writing was represented in one shipment” explains the British Museum, which was immediately wary of this ” entire collection ready for a single uninformed buyer”.

But other clues also raised the museum experts’ suspicions: most of the inscriptions contained a “jumble of signs which made no sense when read” while “the size and thickness of each tablet did not correspond to the originals.” This is a “common mistake” of counterfeiters, who mainly work with photographs from books, the Museum estimates.

In addition, “none of the objects were really ancient,” according to the experts, who soon realized that the tablets had not been dried in the sun, but fired in a modern kiln.

According to the British Museum, it is “possible” that these fake antiquities came from the Middle East. Counterfeiting clay tablets dates back at least 200 years or more, but this is “the first time we’ve seen something of this type,” experts say, also expressing concern about “a new type of production destined for a gullible market.”

These products have no value in their current state, but could well be “misleading as extremely valuable and could be worth thousands of pounds” if they had been sold to an unsuspecting buyer.

Instead, the counterfeit items will now be used “for educational purposes” announced the British institution and a selection displayed over a period of time, when the British Museum reopens.