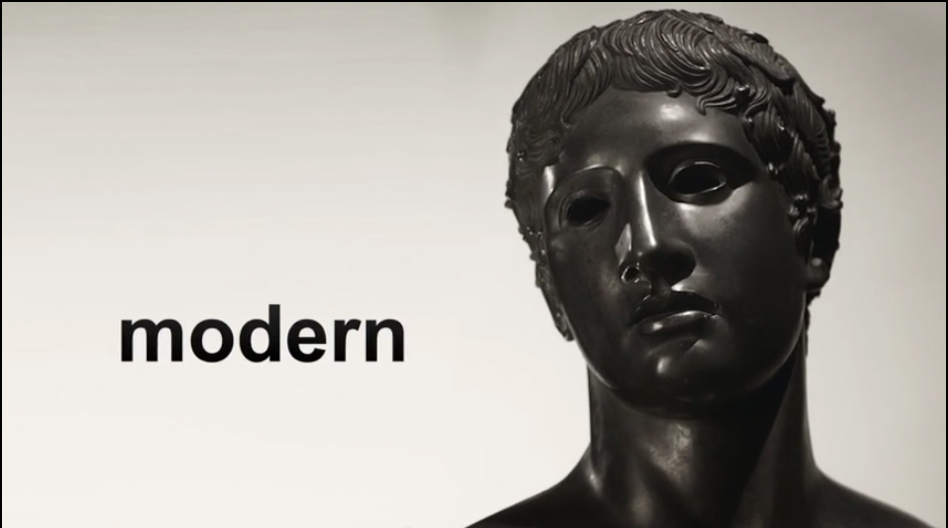 On the occasion of the “Defining Beauty” opening…

The long awaited “Defining Beauty” exhibition is opening today in the British Museum. Among the exhibits is the Ludwig Maximilians University’s Spear-Bearer, a Roman copy of Polyklet’s statue of Doryphoros ­– the Greek word for spear-bearer. The story of the LMU’s statue and its lending is quite fascinating and was published last month at the university’s site:

Choosing to reject a courteous request from Prada is not a decision that is taken lightly, especially when one is being asked to open the Fondazione Prada’s new art gallery in Milan. Indeed, the response would have been prompt and positive – were it not for the fact that an e-mail had arrived in Professor Rolf Michael Schneider’s mailbox a short time before. Addressed to the LMU archaeologist, the text began with the words: “My dear Rolf”. “English is a marvellously nuanced and subtle language,” says Schneider, who taught at Cambridge University for several years. “Normally, mails begin with plain ‘Dear’, so when one comes across ‘My Dear’, one can be sure that something out of the ordinary is afoot. The mail turned out to be from Ian Jenkins, Senior Curator in the Department of Greek and Roman Antiquities at the British Museum in London, who politely enquired whether LMU would be willing to lend its Spear-Bearer for an exhibition entitled Defining Beauty – The Body in Ancient Greek Art, opening in March 2105. “For the first time, our bronze reconstruction will be at the center of an exhibition – in the British Museum! – and will stimulate renewed critical discussion. That’s what set the project in motion in the spring of 2014.”

Copies as pointers to the original

Polyklet’s statue of Doryphoros is one of the most famous bronzes created in Classical Greece. Unfortunately, it is known only from Roman copies, all carved in marble. The original has not survived. And this brings us to one unique feature of LMU’s Spear-Bearer that explains why the British Museum was interested in presenting it in the upcoming exhibition: This statue is the result of an attempt to reconstruct Polyklet’s original work, as faithfully as possible, on the basis of existing Roman copies – a method pioneered by Adolf Furtwängler in the 19th century, which is still in use today. Furtwängler was Professor of Classical Archaeology at LMU between 1894 and 1907. “Those years were an exciting period for my academic forerunners,” says Schneider. “At that time, it was widely believed that lost original works of art from the Classical Age could be reconstructed. Of course, the idea of viewing antique copies as guides to the originals was, and still is, helpful. But in the end it teaches us more about the Roman copies themselves than it does about their lost Greek archetypes.” This type of comparative approach was first used by linguists, who recognized that one could often reconstruct an original manuscript text by analyzing the differences and points of agreement between later copies.

In order to “recreate” Polyklet’s original figure, between 1910 and 1912 the Munich sculptor Georg Römer reproduced what were regarded as the qualitatively most convincing and best preserved elements of three Roman copies. The limbs of LMU’s Spear-Bearer are derived from an almost completely preserved statue found in the ruins of Pompeii. The upper body is based on the Pourtalès torso in Berlin, and the head is indebted to a bronze bust from the Villa dei Papiri in Herculaneum. “Of course one cannot expect to obtain a perfect match by combining parts from three Roman copies made at different times and in different workshops. Moreover, making a faithful copy of an existing piece is actually a most difficult undertaking,” says Schneider. The second unusual feature of LMU’s Doryphoros is that it is a bronze copy of several marble originals, while the antique copies represent attempts to reproduce a bronze original in marble. Only two examples of the Spear-Bearer executed in bronze can still be seen today, and they are in a sense twins. The elder twin is now in Warsaw. “It is not widely known,” says Schneider. “But it too is about to emerge from the shadows. In May, Warsaw’s Spear-Bearer will form part of the Fondazione Prada’s show in Milan.”

“Even today, the figure of the Spear-Bearer retains a considerable measure of cultural significance for LMU,” says Schneider, who chose the work as the subject of his inaugural lecture in 2001. “Its most interesting aspect lies in the transformations that have occurred in how the figure is perceived.” Over the past 100 years or so, it has been part of an era that could hardly have been more turbulent. Doryphoros’ biography began with Adolf Furtwängler’s researches, carried out in the intellectual atmosphere of LMU towards the end of the 19th century. In 1921, it found itself in a very different world, serving as the focal point of a monument to the LMU academics and students who lost their lives in the First World War. That memorial was located in the very heart of the Main Building. “This illustrates how susceptible to misuse such a figure can become when it is detached from its original context,” says Schneider. “Then the Nazis appeared on the scene, although they had little use for the piece.” And when the central section of the Main Building was destroyed in 1944, the Spear-Bearer miraculously survived.

He survived, but not entirely unscathed, having lost his lower legs, his eyes – and his spear. He was returned to his original position only in the mid-1950s, and has taken on several new identities since then. He now appears unarmed, and constitutes the sculptural centerpiece of the Main Building. So his absence will not go unnoticed during the coming months, while he is engaged on the task of embodying a particularly ambitious attempt to reimagine a lost masterpiece of Classical Greek art for visitors to the British Museum’s exhibition (which runs until July). “He will be a focal element in the exhibition, with an original sculpture from the Western Pediment of the Parthenon by his side,” says Schneider.

As soon as he returns from his stay in London, Doryphoros will give an account of his journey, which will appear in MUM (the Münchner UniMagazin) and online. Then he will resume his customary station in the Main Building as a silent observer of the comings and goings at LMU.