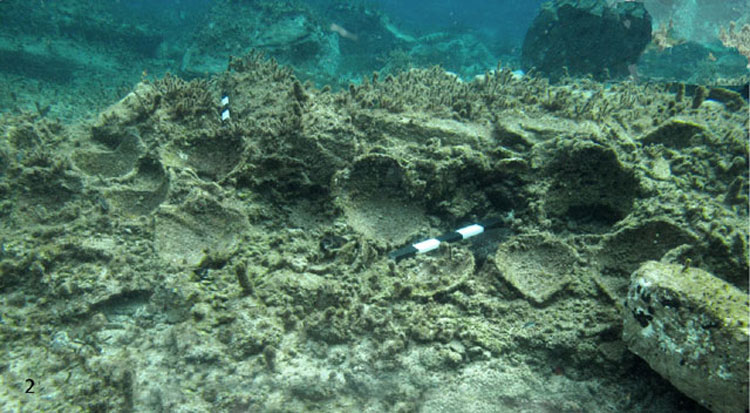 In the past they had been identified as port facilities

The Hellenic Ministry of Culture in cooperation with the National Hellenic Research Foundation has conducted a survey in the waters north-east of Delos in order to re-identify and map the remains in the sea area of the Stadion District (Quartier du Stade). In the past these remains had been identified as port facilities.

During the archaeological investigation it was found out that they are in fact settlement remains, e.g. the eastern borders of the Stadion District.

The settlement remains located are related to commercial and manufacturing activities. Researchers came to this conclusion after finding a floor with 16 in situ embedded clay vessels (amphoriskoi), semi-preserved, along with a kiln. Similar remains have been located in Pompeii and Herculaneum.

In addition, on the floor’s extension big stone blocks have been located in line and photographed. These stone blocks probably were part of the eastern quay of the Stadion District. Also located and mapped were walls of buildings and building elements of a fallen colonnade, in depths varying from 20cm up to 1m. Other walls of buildings were found on the cost along the coastline.

The archaeological survey has been conducted by underwater archaeologist Magdalene Athanasoula (scientific supervisor), the diver Manolis Tsefronis and the underwater technician Spyridon Moureas, all from the Hellenic Ephorate of Underwater Antiquities.

It should be noted that this joint survey took part in the framework of Dr. Mantha Zarmakoupi’s study (external collaborator of the Section of Greek and Roman Antiquity of the NHRF) about the urban development of the late Hellenistic city of Delos, funded by the Marie Curie Intra-European Fellowship Program (Title: UrbaNetworks).