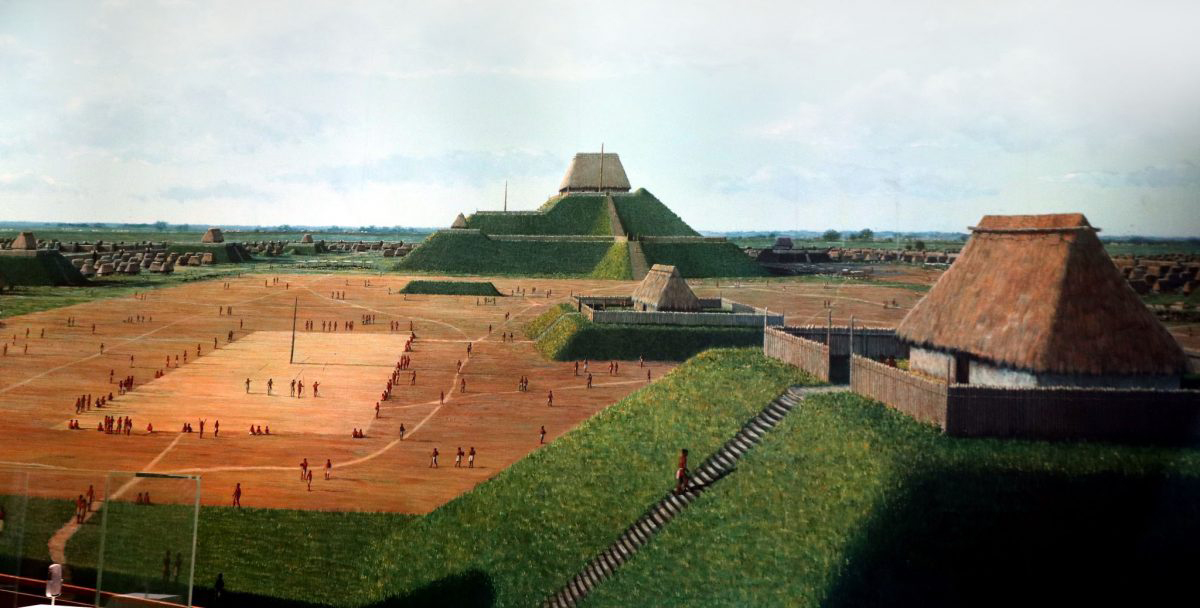 The rise of Cahokia

The cultivation of corn to the American Southwest has been the subject of debate amongst archaeologists and historians.

A new study suggests that corn cultivation occurred around AD 900–1000, corresponding to a period when Cahokia was rapidly expanding.

The research team determined the age of charred corn kernels found in homes, shrines and other archaeological contexts in and around Cahokia. The researchers also looked at carbon isotopes in the teeth and bones of 108 humans and 15 dogs buried in the vicinity.

Carbon-isotope ratios differ among food sources, with isotope ratios of corn being significantly higher than those of almost all other native plant species in the region. By analyzing the ratio of carbon 12 to carbon 13 in teeth and bones, the team determined the relative proportion of different types of foods the people of Cahokia ate in different time periods.

The corn remnants and isotope analyses revealed that corn consumption began in Cahokia between 900 and 1000. This was just before the city grew into a major metropolis.

“There’s been an idea that corn came to the central Mississippi River valley at about the time of Christ, and the evolution of maize in this part of the world was really, really slow,” said retired state archaeologist Thomas Emerson, who led the study. “But this Cahokia data is saying that no, actually, corn arrived here very late. And in fact, corn may be the foundation of the city.”

The research team included Illinois State Archaeological Survey archaeobotanist Mary Simon; bioarchaeologist Kristin Hedman; radiocarbon dating analyst Matthew Fort; and former graduate student Kelsey Witt, now a postdoctoral researcher at Brown University.
Beginning in about 1050, Cahokia grew from “a little village of a few hundred people to part of a city with 5,000 to 10,000 people in an archaeological instant,” Emerson said. The population eventually expanded to at least 40,000. This early experiment in urban living was short-lived, however. By 1350, after a period of drought and civil strife, most of the city’s population had dispersed.

Scientists who theorize that corn came to the central Mississippi River valley early in the first millennium A.D. are overlooking the fact that the plant had to adapt to a completely different light and temperature regime before it could be cultivated in the higher latitudes, said Simon, who conducted an exhaustive analysis of corn kernels found at Cahokia and elsewhere in the Midwest.

“Corn was originally cultivated in Mesoamerica,” she said. “Its flowering time and production time are controlled by the amount of sunlight it gets. When it got up into this region, its flowering was no longer corresponding to the available daylight. If you planted it in the spring, it wouldn’t even start to flower until August, and winter would set in before you could harvest your crop.”

The plant had to evolve to survive in this northerly climate, Simon said.
“It was probably only marginally adapted to high latitudes in what is now the southwestern United States by 0 A.D.,” she said. “So, the potential for successful cultivation in the Midwest at this early date is highly problematic.”

When they analyzed the carbon isotopes in the teeth and bones of 108 individuals buried in Cahokia between 600 and 1400, researchers saw a signature consistent with corn consumption beginning abruptly between 950 and 1000, Hedman said. The data from dogs buried at and near Cahokia also corresponded to this timeline.

“That’s where you see this big jump in the appearance of corn in the diet,” Hedman said. “This correlates very closely with what Mary Simon is finding with the dates on the maize.”

“Between 900 and 1000 is also when you start to see a real shift in the culture of Cahokia,” Emerson said. “This was the beginning of mound construction. There was a massive growth of population and a dramatic shift in ideology with the appearance of fertility iconography.”

Artifacts uncovered from Cahokia include flint-clay figurines of women engaged in agricultural activities and vessels marked with symbols of water and fertility. Some of the items depict crops such as sunflowers and squash that predated the arrival of corn.

“It wasn’t like the Cahokians didn’t already have an agricultural base when corn arrived on the scene,” Simon said. “They were preadapted to the whole idea of cultivation.”

The absence of corn iconography in artifacts from the city reflects corn’s status as a relative newcomer to the region at the time Cahokia first flourished, Emerson said.