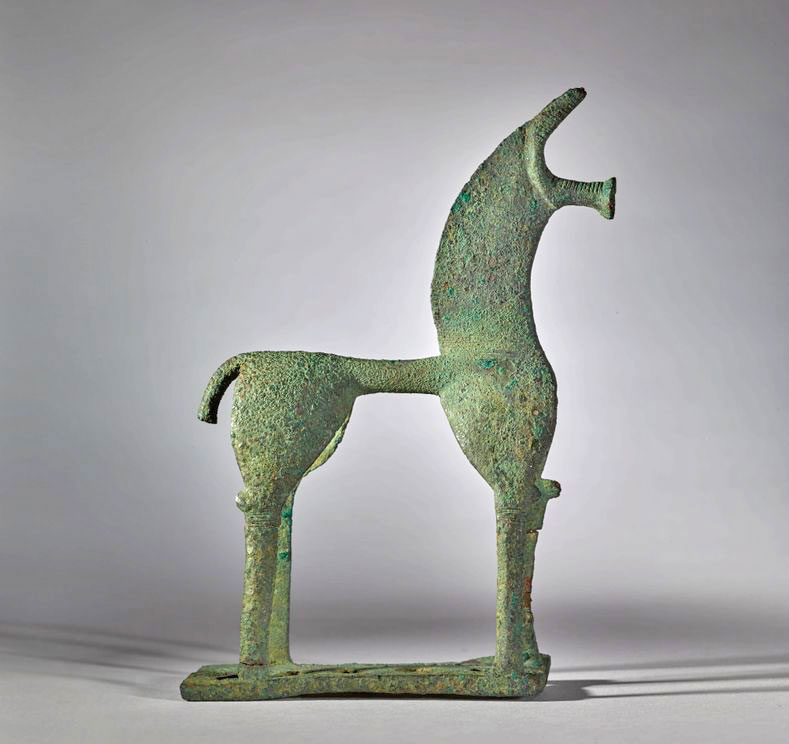 The case of a bronze horse dating to the Geometric Period

The Greek Ministry of Culture wins a Second Circuit case involving its rights to question the provenance and legal ownership of a bronze horse dating to the Geometric Period. The item was to be auctioned by Sotheby’s but was withdrawn following a formal request from the Ministry -as experts had spotted the item on the auction catalog; still, Sotheby’s had asked the Ministry to provide evidence for its claims within seven business days, an event that led to a dispute that reached the U.S. Courts of Law.

According to a press release by Amineddoleh & Associates, the law firm handling the case for Greece, the firm has secured Second Circuit win for the Greek Ministry of Culture in what they characterize “a landmark Cultural Heritage case”.

On June 9, 2020, the United States Court of Appeals for the Second Circuit issued an order ruling in favor of Amineddoleh & Associates LLC and Foley Hoag LLP’s client, the Ministry of Culture and Sports of the Hellenic Republic in the Barnet case, previously named as one of the art law cases to watch in 2018. The ruling states that the Foreign Sovereign Immunities Act (FSIA) does not provide jurisdiction over cases involving the exercise of a sovereign entity’s protection of its cultural heritage, an activity that the Second Circuit deemed to be sovereign, not commercial, in nature. This ruling is poised to have major repercussions for the US antiquities market.

The case stemmed from a letter sent by the Greek Ministry of Culture to auction house Sotheby’s in New York City. In mid-April 2018, Sotheby’s began publicly advertising an auction titled The Shape of Beauty, which included a bronze horse in the Corinthian style and from the Geometric Period, indisputably from Greece. The horse was consigned for sale by the Barnets, whose parents had purchased it some decades earlier from Robin Symes. The Ministry first became suspicious of the item’s provenance while reviewing the auction catalog.

In particular, the fact that Robin Symes was listed as the horse’s prior owner caught the Ministry’s attention. Symes, who was infamously referred to as a “fence” by museum officials, is a former dealer well-known in the art world due to his prominent role in the market for looted antiquities. Symes’ inclusion in the Bronze Horse’s provenance within the auction catalog pointed towards the very real possibility that the object had been looted before it made its way to the Barnets.

Understanding Symes’ role in the art market is important in order to fully comprehend the Barnet dispute. Symes and his partner, Christo Michaelides, conducted millions of dollars of business by unlawfully selling antiquities.  Symes sold looted items through dealers, museums, and auction houses, and created fictitious “paper trails” to launder antiquities internationally. After his partner’s untimely death, Symes hid a hoard of plundered antiquities in Switzerland, London, and New York to conceal them from Michaelides’ family. Symes fabricated a multitude of lies about these items under oath in court proceedings, was held in contempt of court and was ultimately sentenced to two years’ imprisonment.

Symes’ fall from grace exposed him as a “linchpin in the networks that once traded with impunity in such material.” Investigations during those proceedings revealed that Symes possessed vast quantities of objects. In the aftermath of these legal battles, it was revealed that Symes’ illicit activities had a far reach, with numerous museums and collectors repatriating looted items they had inadvertently purchased from Symes, including the Getty Museum. In addition, auction houses have recently withdrawn lots from auctions to avoid supporting the market for looted antiquities.

In order to grapple with the numerous items that passed through Symes’ hands, Greek authorities regularly consult the Symes-Michaelides Archive. This photographic archive assists policing authorities and other governmental agencies in determining whether objects may have been looted and sold as part of Symes’ lucrative operations. While researching the items listed in The Shape of Beauty sale, the Ministry found that photographs depicting the Bronze Horse appeared in the Symes-Michaelides Archive. Needless to say, this raised serious concerns for the Ministry, but that was not the only red flag that prompted them to send the letter in controversy.

The name Barnet itself is also tied to problematic antiquities and has come under scrutiny. In 1999, Howard Barnet made a charitable contribution to the Metropolitan Museum of Art with the donation of a Laconian kylix. In 2006, after it was revealed that the antiquity was looted, the museum repatriated the item to the Italian Ministry of Culture as part of a widely celebrated deal. This was a significant act of repatriation, as it was one of the first agreements between the Republic of Italy and the Metropolitan Museum of Art for the return of looted antiquities.

The Ministry was also suspicious because archaeological experts, including the world’s foremost authorities on Greek antiquities (archaeologists from the National Archaeological Museum of Greece), noted that the Bronze Horse, more likely than not, came from the province of Thessaly, and quite possibly from the area of Filia Karditsa. Archaeologists had previously found similar bronze figures in that area, but unfortunately, it had been heavily looted. There is published material, easily available online, regarding the extensive looting of sanctuaries in Filia Karditsa during the early 1960s, the decade in which the Bronze Horse first appeared on the market.

Moreover, the object’s purported sale at a Swiss auction in 1967 raised concerns for the Ministry. There is a well-documented pattern revealing that antiquities looted from Greece often move through illegal channels and either pass through, or are sold in, Switzerland. What’s more, the relevant Swiss auction listed neither the buyer nor the seller of the Bronze, meaning that the sale could have been a sham used to launder the item and fabricate a legitimate provenance.

It should be noted that there are recorded cases in which a looted item is placed for auction by an anonymous seller, and then either that person or one of their collaborators purchases the work, thereby creating a fictitiously authentic history for the object. (In fact, it was noted that Robin Symes himself acted in this way.)  For this reason, identifying the buyer and seller at each stage of a cultural heritage-related transaction is extremely important; the Greek Ministry was in the process of researching this information and a potential connection between the Bronze Horse and Symes with policing authorities (such as INTERPOL) at the time that Plaintiffs filed this suit. Unfortunately, this is a time-intensive process, and the Ministry was forced to act upon the information available to it at the time in order to prevent the Bronze Horse’s sale and potential disappearance.

What’s more, to date the Ministry has not found any documentation to prove that the Bronze Horse was legally exported from Greece or declared to authorities of the Greek State as required by the country’s patrimony laws.

The Ministry vs Sotheby’s and the Barnets

For all of these reasons, the Ministry sent a formal inquiry letter to Sotheby’s, requesting that the auction house withdraw the lot until its provenance and exit from Greece could be researched more thoroughly. Sotheby’s withdrew the item from the auction, but rejected all of Greece’s assertions and insisted that the Ministry provide evidence for its claims within seven business days. In its response, Sotheby’s also admitted that the provenance information originally provided in its auction catalog was erroneous, inaccurately stating that the Bronze Horse was “very probably” purchased by Symes in 1967 at Swiss auction house of Munzen and Medaillen. In other words, Robin Symes was not the purchaser at the 1967 auction, but had acquired the bronze at some subsequent time during an unknown transaction. In any event, Symes appeared to be involved in the Bronze Horse’s chain of custody, and this fact could not be ignored.

As can be expected, Sotheby’s response raised additional red flags and unanswered questions for the Ministry. As the Ministry continued researching the Bronze Horse’s path from Greece to New York, the Barnet Family (the consignors) and Sotheby’s jointly filed a claim in the United States District Court for the Southern District of New York.

The Ministry filed a motion to dismiss based upon the Foreign Sovereign Immunities Act (FISA), which provides foreign sovereigns (and their agencies) with immunity from suit in the U.S. The exceptions enumerated in FSIA are the only means for U.S. courts to exert jurisdiction over a foreign state or agency, such as the Ministry.

Sotheby’s argued that the commercial activity exception applied, making the Ministry subject to jurisdiction in the U.S. The law firm supporting Greece claimed that Greece was immune from suit because the regulation of its cultural heritage is an act that is not commercial in nature, but sovereign, as it emanates from a constitutional duty of the State toward its people. Private parties cannot exercise such policing and regulatory actions.  The Ministry has long fought to protect Greece’s rich cultural heritage for its people and all of humanity. Under a mandate of the Greek Constitution, the Ministry works are tasked with the daunting task of protecting the sovereign nation’s valuable cultural heritage against looting the and exploitation of stolen goods on the illicit market.

In fulfilling its public national interest, the Ministry actively and diligently monitors the art market for items lacking sufficient documentation and ownership history. As a result, the Ministry sent a letter to the auction house, about an object scheduled for auction. The letter set forth the Ministry’s national interest in an object indisputably from within the sovereign borders of the Greek State. Rather than resolve the inquiry through a private, non-litigious process, the Plaintiffs filed a lawsuit against the foreign state agency.

The law firm then urged the district court to dismiss the case according to these principles, but the Southern District found that the Ministry’s act of sending the letter was carried out in relation with commercial activity because private actors may, and do, send demand letters claiming ownership of artifacts slated for auction. However, this determination did not take into account the particular nature of cultural heritage/patrimonial items and the role States play in ensuring that this type of property is protected from looting and unlawful exploitation. As a law firm specializing in cultural heritage disputes, Amineddoleh & Associates worked tirelessly to distinguish the Ministry’s acts from commercial activity both in the district court case and on appeal – which ultimately proved successful.

Today, the Second Circuit released its opinion reversing the district court and stating that Greece’s enactment and enforcement of patrimony laws are archetypal sovereign activities and therefore do not provide the requisite connection to commercial activity that would authorize suit under FSIA. Barnet et al v. Ministry of Culture and Sports of the Hellenic Republic, 19-2171 (2d Cir. 2020).

After reviewing Greece’s laws governing its cultural heritage, including items like the Bronze Horse, the Second Circuit determined that the core act carried out by the Ministry – sending a letter asserting ownership over the figurine – was of a sovereign nature. In the court’s own words, “nationalizing property is a distinctly sovereign act,” as an extension of its police power. Private parties simply cannot nationalize historical artifacts and regulate their export and ownership – this power belongs to sovereign nations alone.

“We are pleased to have worked with colleagues from Foley Hoag on this appeal to the Second Circuit. We are also pleased that the Second Circuit made a correct decision in keeping with international norms of comity and the applicable judicial precedent, which will support foreign sovereigns and agencies in tracking down and preventing the sale of looted antiquities and cultural heritage items in the U.S”, Amineddoleh & Associates state in the Press Release.