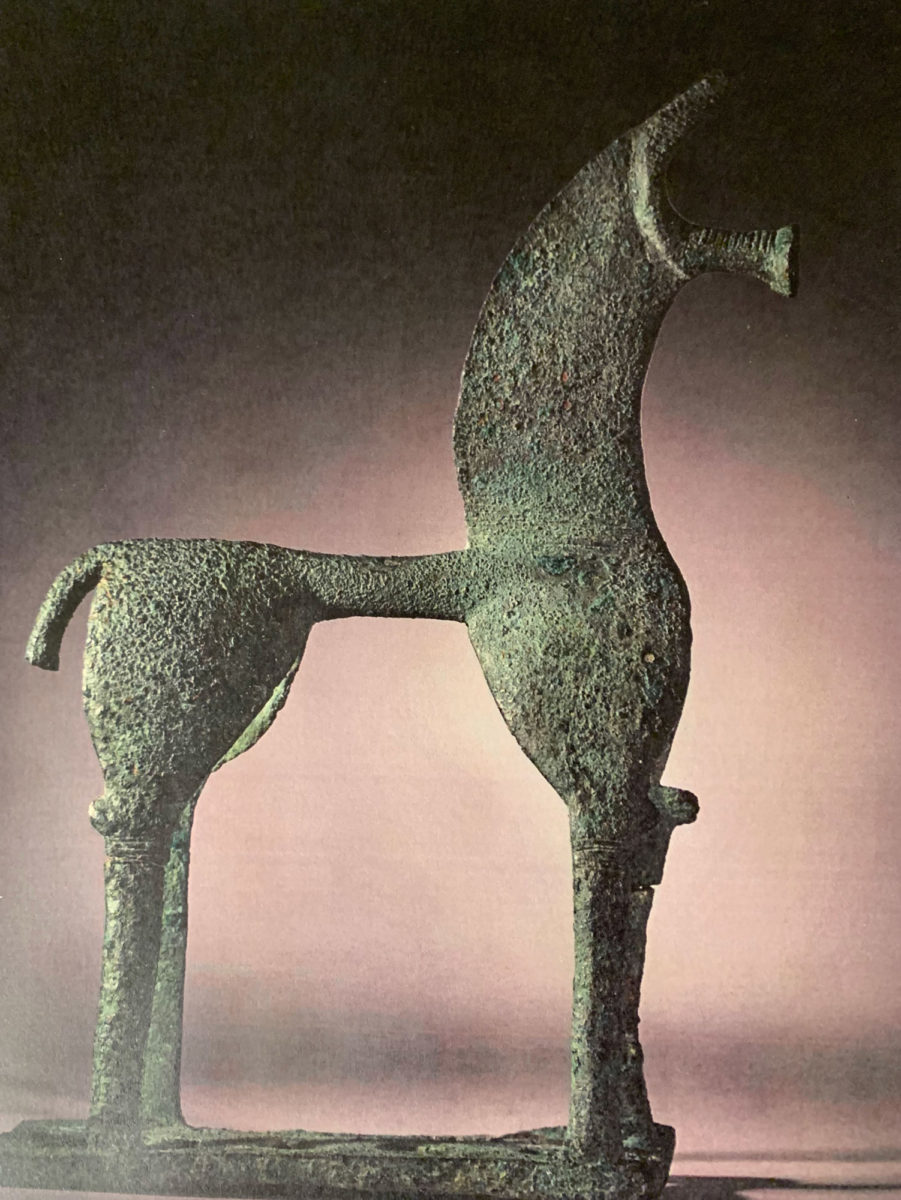 To be auctioned by Sotheby’s

According to the Ministry of Culture’s announcement, Ms Mendoni has presented to Mr Bogdanos a number of issues taken up by the ministry over reclaiming and repatriating antiquities located in collections across America. Mr Bogdanos was thoroughly briefed and he asked for details that might allow him to start an investigation. Also discussed was Greece’s legal claim to ownership of an illegally exported bronze horse statuette of the 8th century BC.

The statuette was to have been auctioned by Sotheby’s in New York on May 14, 2018, along with other artefacts from the Barnets’ collection, and its estimated starting price was between 150,000 and 250,000 dollars.

Regarding the statuette’s origin, the auction house mentioned the successive hands the artefact had passed through: It had been auctioned for the first time by Münzen und Medaillen AG in Basle, Switzerland on May 6, 1967. British antique dealer Robin Symes – an associate of Christo Michaelides, his Greek counterpart – probably acquired it at the auction. Howard and Saretta Barnet bought the artefact from Robin Symes on November 16, 1973 and owned it till their deaths.

The Ministry of Culture had requested Interpol on May 4, 2018, to investigate all of the statuette’s acquisition documents, focusing on those relating to its first auction in 1967, to determine the time and manner of its export from Greece. The investigation proved fruitless, however, as half a century had elapsed since the first auction and the Swiss house’s documents had been destroyed. The Ministry of Culture demanded its return from its current owners, the heirs of Howard and Saretta Barnet, but also from Sotheby’s, who was to auction it on behalf of the former.

The Ministry of Culture and Sports sent a formal letter to Sotheby’s requesting the withdrawal of the bronze statuette from the auction due to the lack of legal export documents from Greek territory, as well as the discovery of a photograph of the artefact in an archive of photos belonging to Symes and Michaelides, seized in Schinoussa in 2006. The Ministry also called for the co-operation of the auction house in repatriating the statuette as an ancient movable monument, which belongs exclusively to the Greek state, in accordance with Greek archaeological legislation and international conventions.

On the eve of the auction, Sotheby’s withdrew the bronze statuette because Greece’s intervention, as it stated in a letter to the Ministry of Culture, caused the artefact to be covered by a “cloud of controversy” which affected its commercial value. In the same letter the house requested specific information on the year and the manner of its exportation from the country, within a very strict time limit. This was in no way sufficient for the official translation of the documents which had to be sent to corroborate the Greek claims.

The ruling issued by the Southern District Court of New York on June 21, 2019, rejected the Greek side’s request because of the US courts’ lack of jurisdiction over a case concerning Greek state ownership.

In cooperation with the State Legal Council, the Ministry of Culture has hired an attorney to defend the interests of the Greek state in hearing the case based on the provisions of archaeological law, according to which ancient movable monuments belong to the sole proprietorship of the Greek State, they are not susceptible to adverse possession and cannot be traded.

Lina Mendoni told the Assistant Prosecutor that the lawsuit against Greece is unprecedented. This is the first time that a lawsuit has been filed against a government. It is usual for countries addressing courts to claim ancient artefacts from auction houses, private collectors and museums, not the reverse; namely recipients of stolen goods and auction houses turning against the states that are claiming objects of their cultural heritage.

This being the reason, the legal claim to the artefact has multiple dimensions. The precedent set by this case concerns not just Greece’s claim. Antiquities cannot be equated with works of art. Antiquities are interwoven with peoples’ history and cultural heritage, concludes the announcement by the Ministry of Culture and Sports.