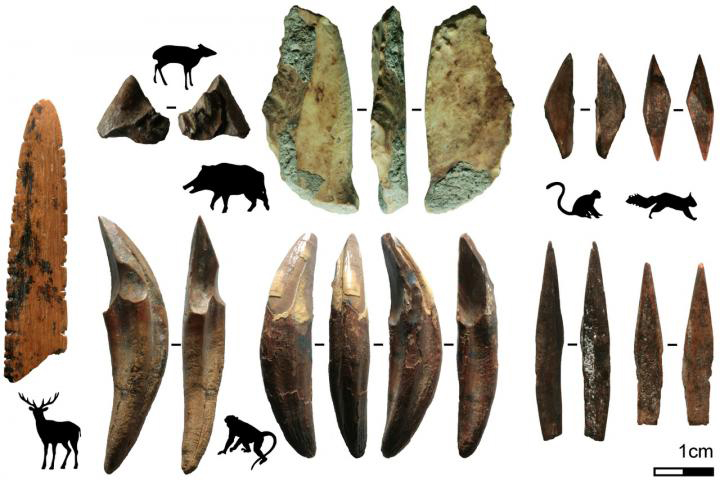 Discovery of oldest bow and arrow technology in Eurasia

The origins of human innovation have traditionally been sought in the grasslands and coasts of Africa or the temperate environments of Europe. More extreme environments, such as the tropical rainforests of Asia, have been largely overlooked, despite their deep history of human occupation. A new study provides the earliest evidence for bow-and-arrow use, and perhaps the making of clothes, outside of Africa ca. 48-45,000 years ago in the tropics of Sri Lanka.

The island of Sri Lanka in the Indian Ocean, just south of the Indian subcontinent, is home to the earliest fossils of our species, Homo sapiens, in South Asia. It also preserves clear evidence for human occupation and the use of tropical rainforest environments outside of Africa from ca. 48,000 to 3,000 years ago — refuting the idea that these supposedly resource-poor environments acted as barriers for migrating Pleistocene humans. The question as to exactly how humans obtained rainforest resources — including fast-moving food sources like monkeys and squirrels — remains unresolved.

In this new study, published in Science Advances, an international team of researchers from the Max Planck Institute for the Science of Human History (MPI-SHH) in Germany, Griffith University in Australia and the Department of Archaeology, Government of Sri Lanka, present evidence for the earliest use of bow-and-arrow technologies by humans anywhere outside of Africa. At ca. 48,000 years old, these tools are earlier than the first similar technology found in Europe. Clear evidence for use on the preserved bone arrowheads shows that they were likely used for hunting difficult-to-catch rainforest prey. Not only that, but the scientists show that other bone tools may have been used for making nets or clothing in tropical settings, dramatically altering traditional assumptions about how certain human innovations were linked with specific environmental requirements.

Hunting in the open and sheltering from the cold?

European cultural products in the form of cave art, amazingly detailed bone carvings, bone tool technologies, and tailored clothing have been frequently held up as the pinnacle of Late Pleistocene human cultural development. There, symbolic and technological innovations have been seen as key survival mechanisms equipping expanding populations to face cold northern climates. Meanwhile, discoveries of older bow-and-arrow technology and artistic or symbolic behaviors in open grassland or coastal settings in Africa have framed ‘savannah’ and marine environments, respectively, as key drivers behind early hunting and cultural experiments by Pleistocene humans in their evolutionary homeland.

As co-author of the new study, Patrick Roberts of the MPI-SHH argues that “this traditional focus has meant that other parts of Africa, Asia, Australasia, and the Americas have often been side-lined in discussions of the origins of material culture, such as novel projectile hunting methods or cultural innovations associated with our species.” Nevertheless, the last twenty years have highlighted how Pleistocene humans occupied and adapted to a variety of extreme environments as they migrated beyond Africa, including deserts, high-altitude settings and tropical rainforests such as those of Sri Lanka.

The new study saw scientists turn to the beautifully preserved material culture from the cave of Fa-Hien Lena, deep in the heart of Sri Lanka’s Wet Zone forests. As co-author Oshan Wedage, PhD at MPI-SHH, states, “Fa-Hien Lena has emerged as one of South Asia’s most important archaeological sites since the 1980s, preserving remains of our species, their tools, and their prey in a tropical context.” Some of the main finds from the site include remarkable single and doubled pointed bone tools that scientists had suspected were used in the exploitation of tropical resources. Direct proof had been lacking, however, in the absence of detailed high-powered microscopic analysis.

Michelle Langley of Griffith University, the lead author of the new study, is an expert in the study of microscopic traces of tool use and the creation of symbolic material culture in Pleistocene contexts. Applying cutting edge methods to the Fa-Hien Lena material confirmed the researchers’ hypothesis. As Langley states, “the fractures on the points indicate damage through high-powered impact – something usually seen in the use of bow-and-arrow hunting of animals. This evidence is earlier than similar findings in Southeast Asia 32,000 years ago and is currently the earliest clear evidence for bow-and-arrow use beyond the African continent.”

The evidence for early human innovation did not stop there. Applying the same microscopic approach to other bone tools, the team identified implements which seem to have been associated with freshwater fishing in nearby tropical streams, as well as the working of fiber to make nets or clothing. “We also found clear evidence for the production of colored beads from mineral ochre and the refined making of shell beads traded from the coast, at a similar age to other ‘social signaling’ materials found in Eurasia and Southeast Asia, roughly 45,000 years ago,” says Michelle Langley. Together, this reveals a complex, early human social network in the tropics of South Asia.

The new study highlights that archaeologists can no longer link specific technological, symbolic, or cultural developments in Pleistocene humans to a single region or environment. “The Sri Lankan evidence shows that the invention of bows-and-arrows, clothing, and symbolic signaling occurred multiple times and in multiple different places, including within the tropical rainforests of Asia,” says co-author Michael Petraglia of the MPI-SHH. In addition to insulation in cold environments, clothes may have also helped against tropical mosquitoes, “and instead of just hunting large grassland mammals,” adds zooarchaeologist Noel Amano, another MPI-SHH co-author, “bows and arrows helped humans procure small, tree-dwelling primates and rodents.”

While archaeologists have long focused on the uniqueness of European markers of behavioural modernity, the new study is part of a growing awareness that many regions of the world saw extraordinary and complex new technologies emerge at the end of the Palaeolithic. “Humans at this time show extraordinary resourcefulness and the ability to exploit a range of new environments,” notes Nicole Boivin, Director at the MPI-SHH and study coauthor. “These skills enabled them to colonize nearly all of the planet’s continents by about 10,000 years ago, setting us clearly on the path to being the global species we are today.”

NOTES
1. Max PLanck Institute for the Science of Human History