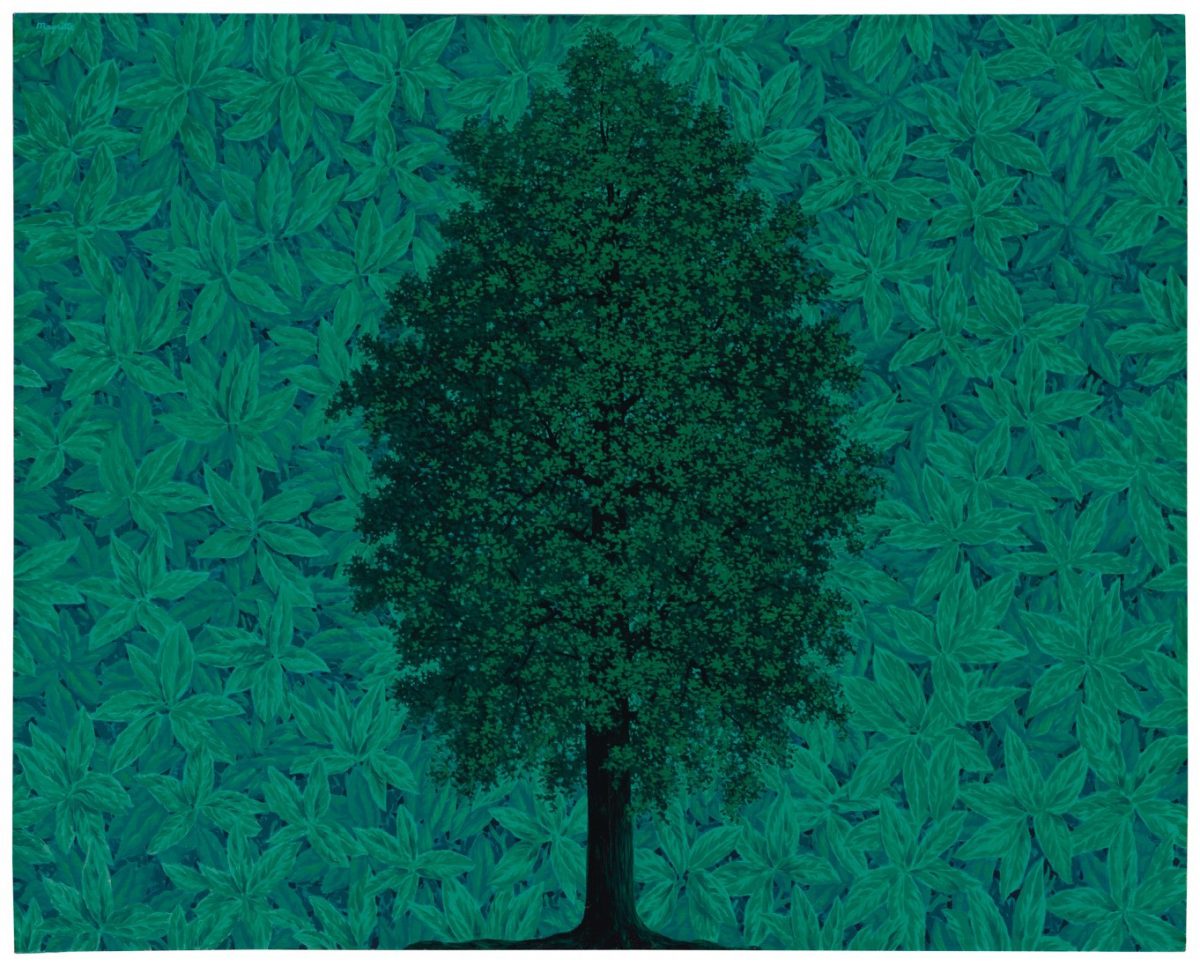 Magritte for sale in London

L’arc de triomphe will be offered by Christie's

On 10 July, Christie’s will offer René Magritte’s L’arc de triomphe (1962, estimate: £6.5-9.5 million) in London as a highlight of ONE: A Global Sale of the 20th Century. Painted during the opening months of 1962, L’arc de triomphe features one of the most familiar pictorial elements of René Magritte’s post-war oeuvre – the tall, imposing boughs of a verdant tree, meticulously rendered and here, superimposed upon an expanse of its own leaves. The idea first took shape in an ink sketch the artist made in a letter to André Bosmans, dated 14 February 1962.

Olivier Camu, Deputy Chairman, Impressionist and Modern Art, Christie’s: “After the outstanding results achieved for René Magritte’s work in London in February this year, we are thrilled and honoured to be able to present to the market the artist’s magnificent L’arc de triomphe (The triumphal arch) of 1962. One of only a handful of Magritte paintings of such a large scale left in private hands, L’arc de triomphe, formerly in the celebrated collection of Harry Torczyner, has not been seen in public since it was purchased from Christie’s over 25 years ago. The choice of title suggests Magritte believed that this composition was a triumph in his quest to answer the problem of how to represent trees whilst also revealing the mystery of reality. Magritte certainly has succeeded in capturing the essence of the tree in this work, and, as usual, he brilliantly subverts our expectations, playing with perspective by juxtaposing a massive and distant tree against a background of meticulously depicted leaves seen in close-up. The impossible contradiction makes a strong and poetic impression especially with such a large format, taking the viewer in, as a forest would.”

Magritte was a deeply cerebral, intellectually motivated artist and the tree was an important symbol in his imagination, representing the ultimate affirmation of nature as an essential theme in his perception of reality and vision of worldly existence. “Pushing up from the earth towards the sun,” Magritte said “a tree is an image of a certain happiness. To perceive this image, we must be still, like a tree. When we are in motion, it’s the tree that becomes the spectator. It is witness, equally, in the shape of a chair, a table, a door, in the more or less restless spectacle of our life”.

Magritte completed the present painting in late February or early March 1962, in time to show the newly dry canvas, which was initially titled Les goûts et les couleurs, in the annual Charleroi salon, which opened on 10 March. Harry Torczyner, who was Magritte’s attorney in America, as well as a close friend, collector, and a dedicated promoter of and writer on the artist’s work, acquired the picture then. As the invoice dated 9 April reveals, however, the artist had retitled the canvas L’arc de triomphe, apparently inspired by a comment from his friend Suzi Gablik at one of the weekly gatherings the artist held at his home. Magritte explained this change to Bosmans in a letter dated 10 April: “As regards the title: ‘Tastes and colours’, which I find excellent in itself, because of its easy, familiar ring, which when one thinks about it would change if applied to an image more appropriate than the tree. Suzi Gablik has thought of a better one: ‘The triumphal arch’. This title satisfies me completely and will replace ‘Tastes and colours’”.

Magritte celebrates in this painting the triumph of a harmonious, transcendent unity, a wholeness of wondrous design, creation, and perpetual renewal that is manifest in nature only—the sublime beauty of absolute synergy—to which humankind can only aspire in its works.