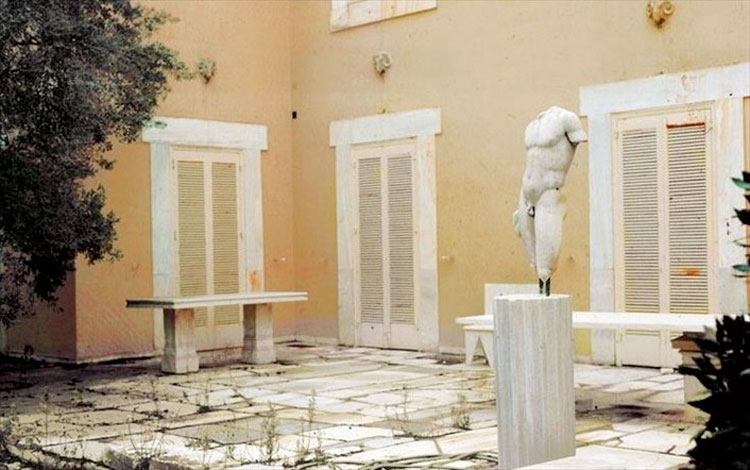 Conversion of the Iolas villa into a cultural centre

The plans have been approved

The plans were approved by unanimous decision of the Central Council of Modern Monuments in a meeting last week, to convert the historic Iolas villa, in Agia Paraskevi, into a place of exhibitions and cultural activities.

The villa is associated with one of the most important personalities of the 20th century; the collector Alexandros Iolas (1907-1987), who promoted contemporary art worldwide. He has been described as one of the most influential people in art since the 1950s and until the late 1970s. The building is a reference point for the history of contemporary art in our country, since it hosted part of the most remarkable collections of Iolas, with works by de Chirico, Man Ray, Modigliani, Calder, Jean Tinguely, Warhol, Hadjikyriakos-Ghikas, and Takis. It should be noted that Iolas donated part of his collection to the Macedonian Museum of Contemporary Art.

Now, 33 years after his death, the house will be restored. Its proposed use agrees with Iolas’ vision of enhancing the building-listed since 1998- which was purchased in 2017 by the municipality of Agia Paraskevi, to be used as a cultural center. In 2018, the study entitled “Creative reuse of the Iolas property” was included in the NSRF, with the municipality of Agia Paraskevi as the implementing body, providing that “the necessary plans as well as any modifications and additions are submitted for approval by the Ministry of Culture’s services in charge and are based on specifications provided by the Directorate for the Protection and Restoration of Modern and Contemporary Monuments.”

The main goal is to conserve the existing form of the building in the spirit of a museum of modern art. The layout of the nine rooms on the ground floor allows for a circular flow of visitors. The dining room, with its marble table, will be converted into a conference hall. Iola’s bedroom, next to the main entrance, will host office spaces, while a cafeteria for visitors will be created in the extension of the building’s east side, the kitchen area and the newer Iolas bedroom.

The large hall upstairs, where Takis work was on display, will be converted into a multi-purpose space (for theatre, cinema and events). The library is preserved for the same use, while two small artists’ guest houses will be built on the extension level.

The modifications should not alter either the building’s exterior or the interior decoration (marble cladding). Elements of the garden equipment (tables, benches, etc.) will be kept and maintained. Plans for the landscaping of the surrounding area, including the works of art to be placed there, as well as the outdoor lighting, will be submitted to the Ministry of Culture for approval.