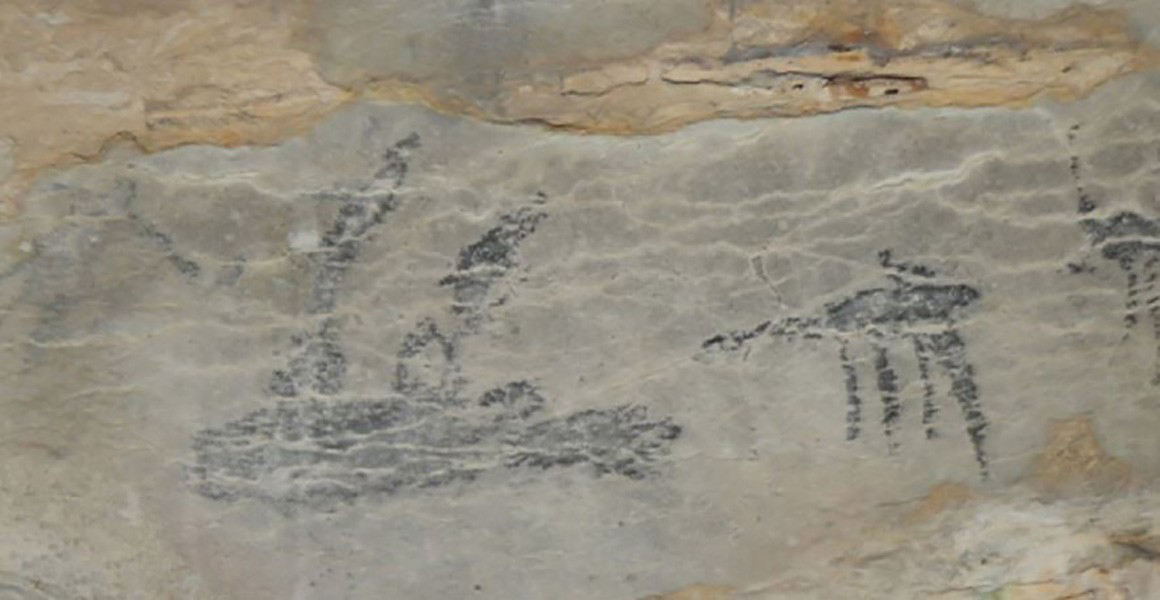 A painting daubed on the walls of a cave in western Madagascar is the only known drawing of the extinct giant lemurs that once roamed the island.

Along with a new fossil site containing the bones of these ancient giants, researchers now know that the animals clung on to survival in these remote western forests until at least 1,000 years ago.

Madagascar used to be home to a range of species that no longer survive today. These included not only the giant elephant birds, but also giant lemurs, some of which were the size of gorillas.

Apart from the bones of these animals and possible eye-witness accounts passed down through the generations, there has been little evidence of what these animals looked like in real life. But the discovery of new cave art may change this.

Julian Hume is a researcher at the Museum who works on the extinct animals of the Indian Ocean. In a new paper published in the Journal of Island and Coastal Archaeology, Julian and his colleagues have described what is thought to be the only known drawing of a giant sloth lemur from caves in western Madagascar.

‘There are scenes of what we perceive as the hunting of a giant sloth lemur with dogs and weapons,’ explains Julian. ‘This is the only image of the original megafauna.

“There is nothing else which shows what these animals looked like in life.”

In addition to that, Julian has also helped author another paper in Quaternary Research describing a new fossil site, which shows that these giant lemurs were surviving on Madagascar at least up until just 1,000 years ago, long after humans first settled the island.

A land of giants

The island of Madagascar, off the south-eastern coast of continental Africa, is home to a diverse range of lemurs.

These generally small-sized primates are found nowhere else in the world. Having been separated from monkeys and apes for some 60 million years, there are now up to 100 species of lemurs inhabiting the tropical and dry forests, savannas, and spiny forests of the island.

Today lemurs average only a few kilograms in weight, but if we were to go back just a thousand years ago the picture was vastly different.

Madagascar used to be home to multiple species of giant lemurs. There were those the size of silverback gorillas that likely spent much of their time on the forest floor. Some giant lemurs would have behaved like baboons, while others had adaptations such as grasping feet that have been compared to those of kolas.

One of the most fascinating groups of giant lemurs were the sloth lemurs. These were highly specialised animals reaching up to the size of sheep that would have hung from tree branches and slowly made their way through the dry forest canopies.

“The sloth lemur Babakotia was a really bizarre species,” explains Julian. “While modern sloths use their claws to hang upside down, instead the Babakotia’s fingers had  become elongated. The bones themselves were curved to become these rigid hooks so that the lemurs wouldn’t have been able to use their hands for anything else. They were really incredible animals.”

The giant lemurs were not alone. At the same time the big primates were ambling around the Malagasy forests, so were a whole host of other, now-extinct megafauna. These included the largest birds ever to exist, the elephant birds, as well as giant tortoises, the Malagasy crowned hawk-eagle and pygmy hippos.

In a new sub-fossil site from the dry forests of western Madagascar, Julian and his colleagues have documented a range of these extinct creatures.

They have found the fossils of four different species of giant lemur, along with bones from the now extinct bibymalagasy, also known as the Madagascan aardvark, the remains of extinct giant cuckoos and even those from the extinct giant fossa, which would have been about two thirds larger than the species that survives today.

‘The most important thing is that we got the carbon dates for these bones,’ says Julian. ‘The dates have shown that these giant lemurs survived at this site into the last millennium, which is the youngest date for that animal yet reported.

“That is probably at least 1,000 years after humans first occupied Madagascar.”

This is significant, because it is thought that one of the drivers for the extinction of many of these large animals was the arrival of people. These bones, however, show that some populations of the giant lemurs clung on in remote refuges in the inaccessible forests for potentially thousands of years.

The arrival of people

It’s still not known exactly when humans arrived on Madagascar. Some have proposed that it first occurred at least 10,000 years ago, although this evidence has more recently been questioned.

What is not in doubt is where these first inhabitants came from. Rather than making the relatively short journey from the African mainland, it is believed that these people sailed across the Indian Ocean from Indonesia.

Astonishingly, the cave art described by Julian and his colleagues include abstract symbols which have only previously been found in a cave site on the island of Borneo, some 7,500 kilometres away.

‘The symbols in Borneo date to 2,000 years ago,’ explains Julian. ‘This is thought to be about the same time that the first Indonesians arrived in Madagascar, meaning that they may have carried these symbols with them. This means the cave site in Madagascar could be anything from 1,000 to 2,000 years old.’

This would match up with the cave art scene depicting the hunting of the sloth lemur, particularly when combined with the dating of the fossil lemur bones. In addition to that, other drawings may also show extinct megafauna such as the elephant bird and the giant tortoise.

There are also some drawings that could show the slightly later influence of the African colonisation events. The caves art also contains lettering which may resemble ancient Arabic script from Ethiopia and human figures with heads that bare a passing similarity to the ancient Egyptian gods.

The researchers speculate that this might represent the mixing of the Indonesian, African and Malagasy cultures during the first few hundred years of human settlement thousands of years ago, although they are also careful to maintain that this is still rather speculative.