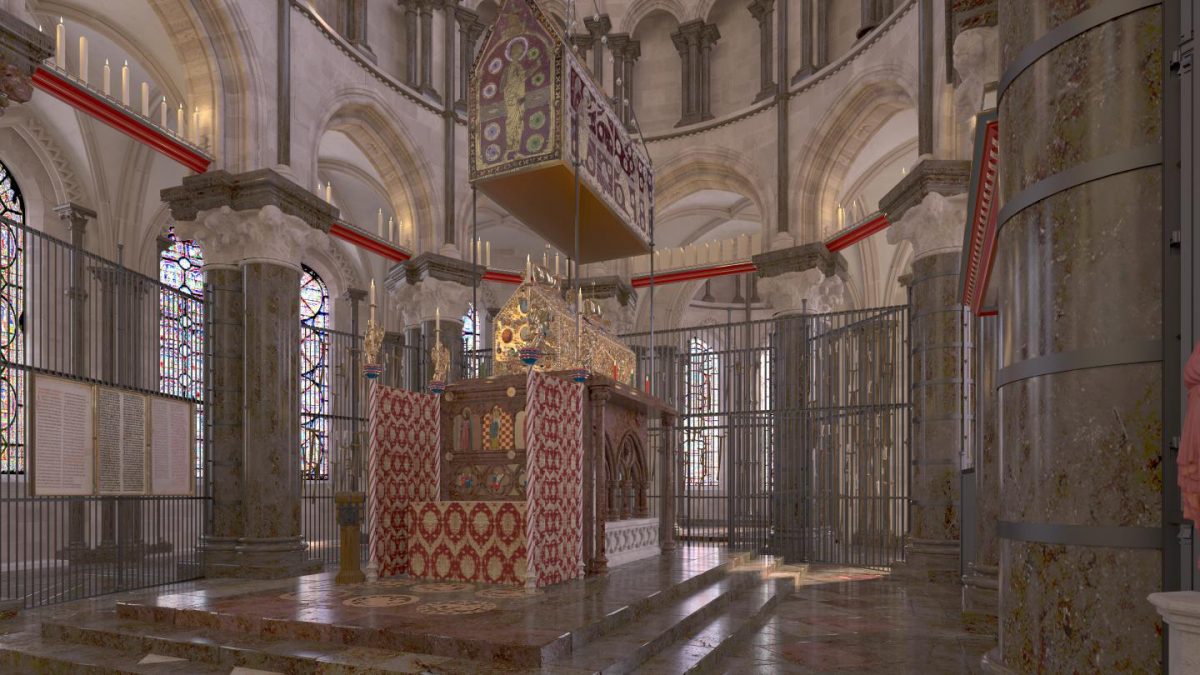 Based on new evidence

The shrine of Saint Thomas Becket, the most important pilgrimage destination in medieval England – visited for hundreds of years by pilgrims seeking miraculous healing – has been digitally reconstructed for the public, according to how experts believe it appeared before its destruction.

In the 1530s, the Reformation in England saw the ornaments and riches of thousands of Catholic churches destroyed in a vast Protestant movement. In 1538, at Canterbury Cathedral, the revered shrine of Saint Thomas Becket, the hugely influential former Archbishop of Canterbury and martyr, succumbed to this fate.

Becket was one of the most important figures in medieval Europe. He was believed to have died valiantly as a martyr, murdered by the knights of his former friend, King Henry II, while defending the rights of the Church. After his death he was quickly honoured as a saint, and was adopted as the patron saint of London, the city of his birth.

A memorial of “unparalleled splendour” was erected within the Trinity Chapel at Canterbury, but, following its destruction, its appearance has long been the subject of debate among historians.

Today on the 7th July 2020, 800 years since the very first jubilee of Saint Thomas’ death – a date still marked at Canterbury Cathedral – new findings published in a special volume of the Journal of the British Archaeological Association describe how a recently made, freely viewable, stunning video digitalisation establishes the most accurate recreation of the shrine to-date.

“Unfortunately,” Dr John Jenkins, historical researcher on the reconstruction team, says, “there are no contemporary comparators for it; the closest are the shrine bases of St Edward the Confessor at Westminster and St Etheldreda at Ely, both of mid- to late-13th-century date.

“So, therefore, our CGI reconstruction uses all currently available evidence including eye-witness accounts; theories from past historians for potential usage of the shrine; date of construction; materials used; specific features; accessibility and location with the church; similar examples elsewhere; as well as those who created it; to reconstruct how the shrine could have looked.”

Crucially, the team’s design is the first to be based upon surviving fragments of the shrine discovered in and around Canterbury Cathedral since the nineteenth century.

Historians have debated whether these fragments came from the shrine. However, “the trefoil and stiff-leaf decoration on some of the fragments stylistically indicates a common origin, and they are very close in type and quality to the carved capitals of the Trinity Chapel,” explains Dr Jenkins, from the Centre for the Study of Christianity and Culture, at the University of York, “within the cathedral this marble is only found in the Trinity Chapel, which surely indicates that these fragments come from St Thomas’ shrine rather than any others.”

The team’s model is based upon how the shrine would have looked in 1408, a time when the cult at Canterbury was visited by up to 100,000 pilgrims a year. The reconstruction argues that the shrine was created much earlier, between 1180 and 1220, and would have likely taken more than thirty years to build and ornament.

“We propose the shrine was a collaborative effort, with the marble base initiated and largely finished by William the Englishman and the vast expensive golden feretory brought to completion only under Elias of Dereham and Walter of Colchester almost four decades later,” states Dr Jenkins.

The team’s model includes many other features, such as a “major finding” of iron grilles (not featured in previous reconstructions) that enclosed the shrine, and “would serve to enhance a sense of mystery” for visitors to the candle-lit shrine. Offerings in thanks for miraculous cures were attached to the grilles so that the shrine would be seen “through a curtain of proof of Thomas’s power to respond to prayer”.

The reconstruction is free to view via a video and forms part of a wider three-year AHRC-funded ‘Pilgrimage and England’s Cathedrals: Past and Present’ project. It will be used as a heritage interpretation tool to help visitors to Canterbury and its cathedral go back in time to share the experience of medieval pilgrims, whilst additionally functioning as a research tool for researchers to complete further investigation to study the look, feel, and nature of the site.

Concluding, Dr Jenkins said: “The murder of Thomas Becket stunned the whole of Christendom. All across Europe he was acclaimed as a martyr. Within ten years of his death over 700 healing miracles had been recorded at his tomb and it rapidly became one of the most important three or four European pilgrimage centres, so it is therefore appropriate that on the 800th anniversary of his shrine we publish our latest findings to explain how new discoveries have helped us create this reconstruction.”