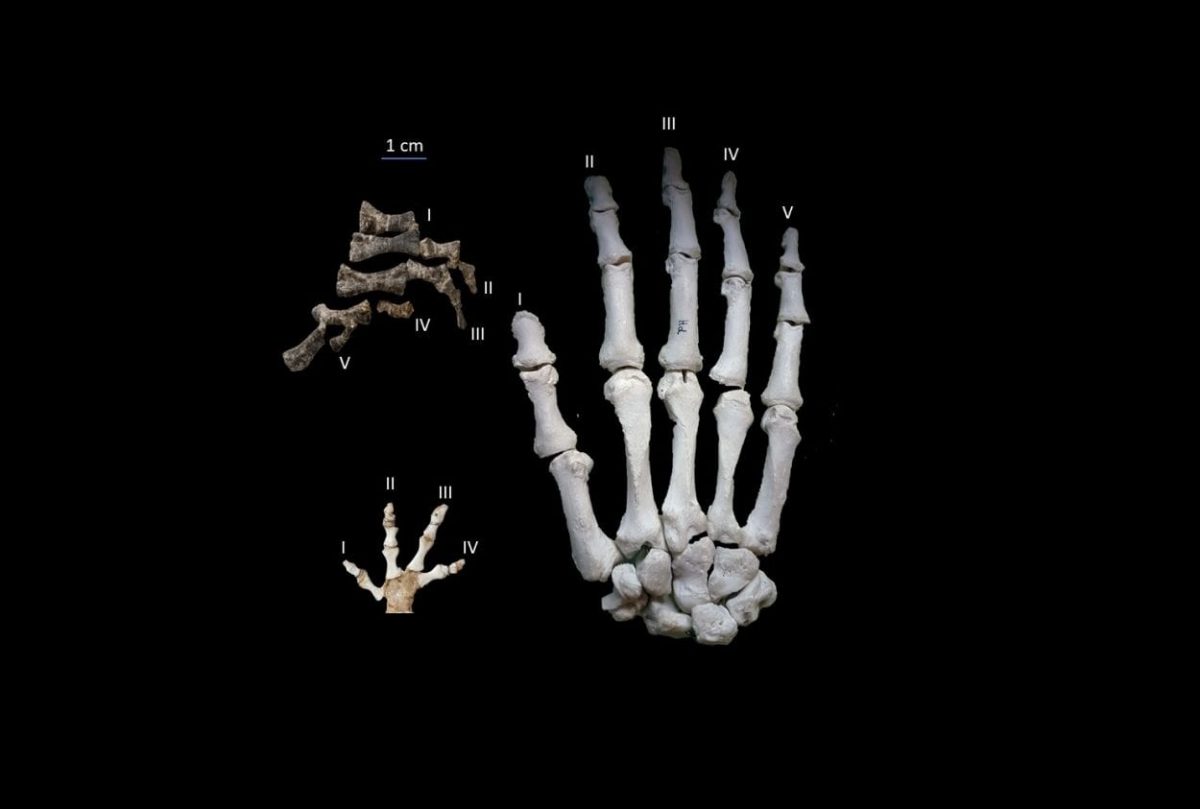 Have you ever wondered why our hands have five fingers? And what about amphibians? They usually only have four. Until now it was assumed that this was already the case with the early ancestors of today’s frogs and salamanders, the Temnospondyli.

However, a new find of the crocodile-like Temnospondyl Metoposaurus krasiejowensis from the late Triassic (about 225 million years old) in Poland shows five metacarpal bones and thus five fingers. As the researchers from the Universities of Bonn and Opole (Poland) note, this finding is very important, because until now, fossil animal tracks may have been wrongly assigned. The results have now been published in the Journal of Anatomy.

Modern amphibians usually have four fingers on the forelimb (and never more), which is called a “four-rayed hand”, as opposed to our five-rayed hand. Of all groups of terrestrial vertebrates, amphibians show the greatest variation in the number of frontfingers. Reptiles are the most conservative and usually have five. In birds, the finger bones in the wing have been lost completely. In mammals, the number of toes in the forelimb also varies greatly: Primates and raccoons have five, in horses only the third has survived, while in cattle and other even-toed ungulates fingers three and four remain. What they all have in common, however, is that this loss of toes or fingers originates from a five-ray pattern, which is why amphibians cannot be the ancestors of all these terrestrial vertebrate groups.

Exact number of toes is controversial

It has been known for some time that the earliest quadrupeds had significantly more fingers than five, such as Acanthostega, which had eight in the forelimb, or Ichthyostega with seven in the hind foot. As early as 300 million years ago, all but the five-fingered forms became extinct. The five-ray pattern was then retained in the real land animals, but was reduced again and again (see horses). The ancestors of today’s amphibians, the Temnospondyli, presented contradictory evidence of skeletons with four fingers, but also tracks that had five.

Temnospondyli is an important group of the early, very diverse quadrupeds. Some temnospondyls became as big as crocodiles, others were rather small. However, like all amphibians, they were dependent on water during their larval stage. Their most famous representatives include Eryops or Mastodonsaurus. “It’s also important to understand the evolution of modern amphibians, as this group probably evolved from the Temnospondyli,” says Dr. Dorota Konietzko-Meier from the Institute for Geosciences at the University of Bonn, who discovered and prepared the left forelimb of a Metoposaurus krasiejowensis in Krasiejów (southwest Poland).

However, despite the long history of research, the exact number of fingers in Metoposaurus and other temnospondyls is still controversial. “It’s remarkable that even in the case of the very well-researched Eryops, the skeletal reconstruction exhibited at the Muséum National d’Histoire Naturelle in Paris has five fingers, while only four fingers can be seen at the National Museum of Natural History in Washington,” says Ella Teschner, a doctoral student from Bonn and Opole. Lately, science has assumed that, similar to most modern amphibians, all Temnospondyli have only four toes in their forelimbs. This resulted in the five-toed footprints common in the Permian and Triassic periods being almost automatically assumed to not belong to Temnospondyli.

“The find from the famous Upper Triassic site Krasiejów in Poland, therefore, offers a new opportunity to study the architecture and development of the hand of the early quadrupeds,” says paleontologist Prof. Dr. Martin Sander from the University of Bonn. A considerably broader view of the entire group of Temnospondyli did not show a clear trend with regard to the five-ray pattern and suggested that the number of digits was not as limited in the phylogenetic context as was assumed. “Evidently, the temnospondyls were already experimenting with the four-ray pattern, and the five-ray pattern died out before the emergence of modern amphibians,” adds Sander.

Five fingers on each hand?

“Even if the ossification of five metacarpal bones described here was only a pathology, it still shows that a five-ray pattern was possible in Temnospondyli,” says Konietzko-Meier. However, it could not be assumed with certainty that the reduction in the number of fingers/digits from five to four always affected the fifth place on the hand in these fossil taxa. The possibility that some of the four-fingered taxa were caused by the loss of the first ray cannot be excluded. Sander: “The new finding of a five-fingered hand is particularly important for the interpretation of tracks, as it shows that a five-fingered forefoot print could also belong to the Temnospondyli and thus indicate a considerably wider distribution area of these animals.”

These results are also of general importance since limb development plays an important role in evolutionary biology and medicine, and fossils may, therefore, provide important information for the evaluation of theories of hand development.