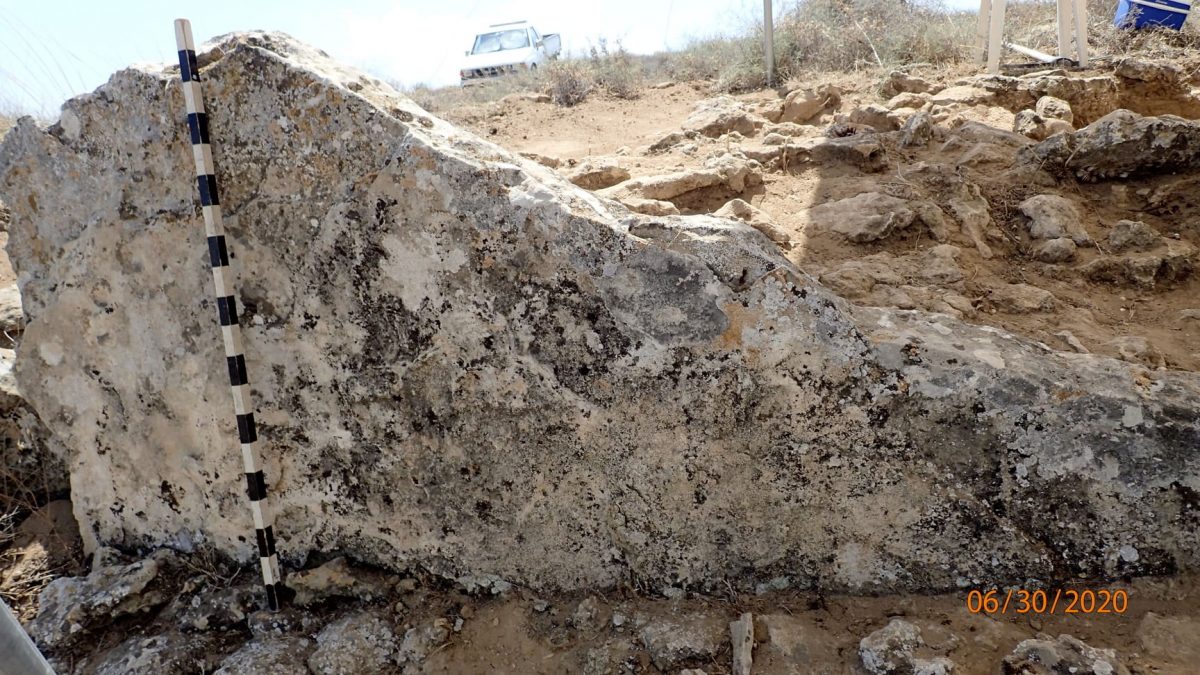 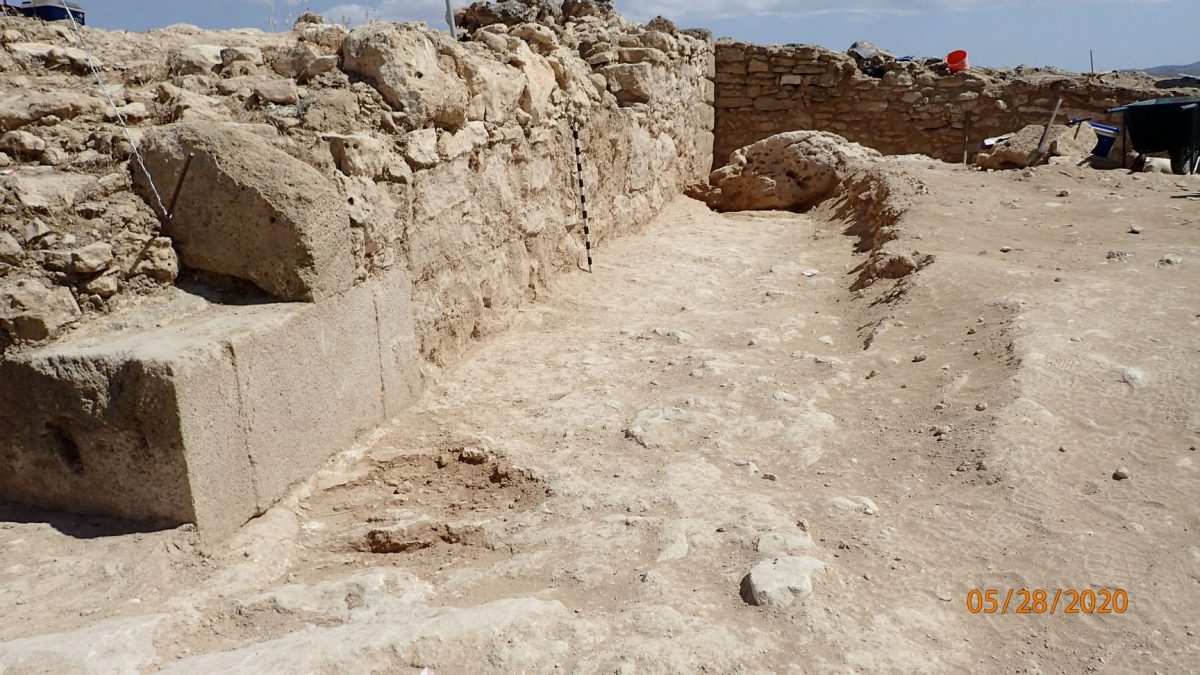 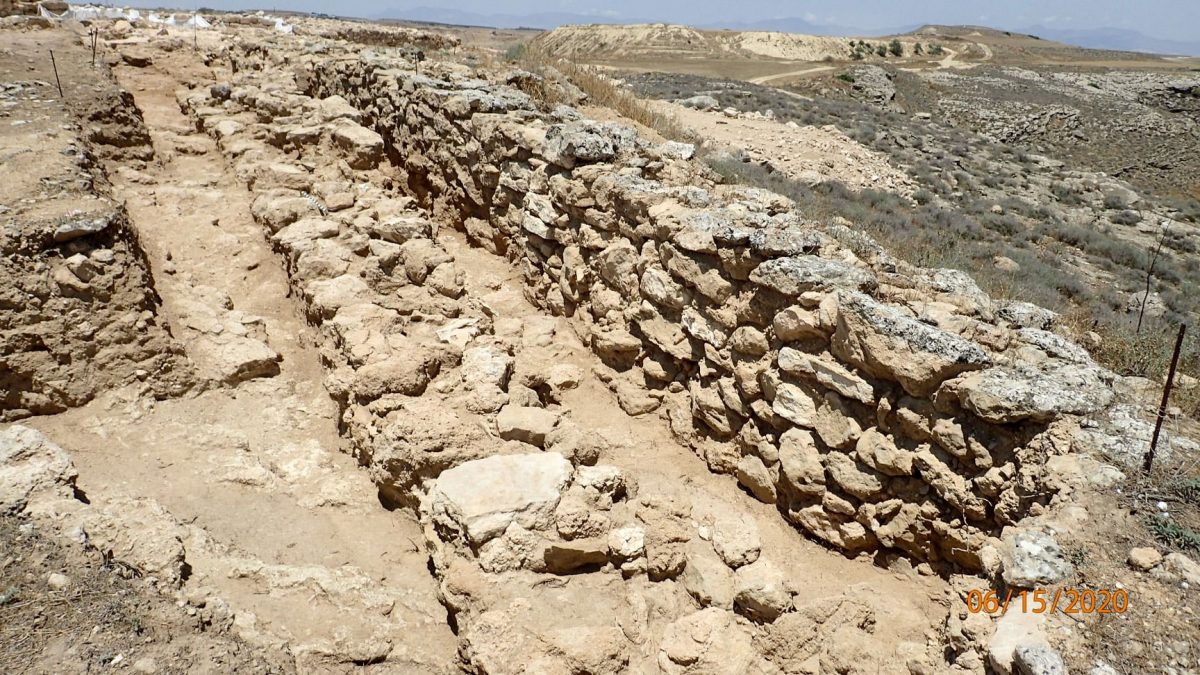 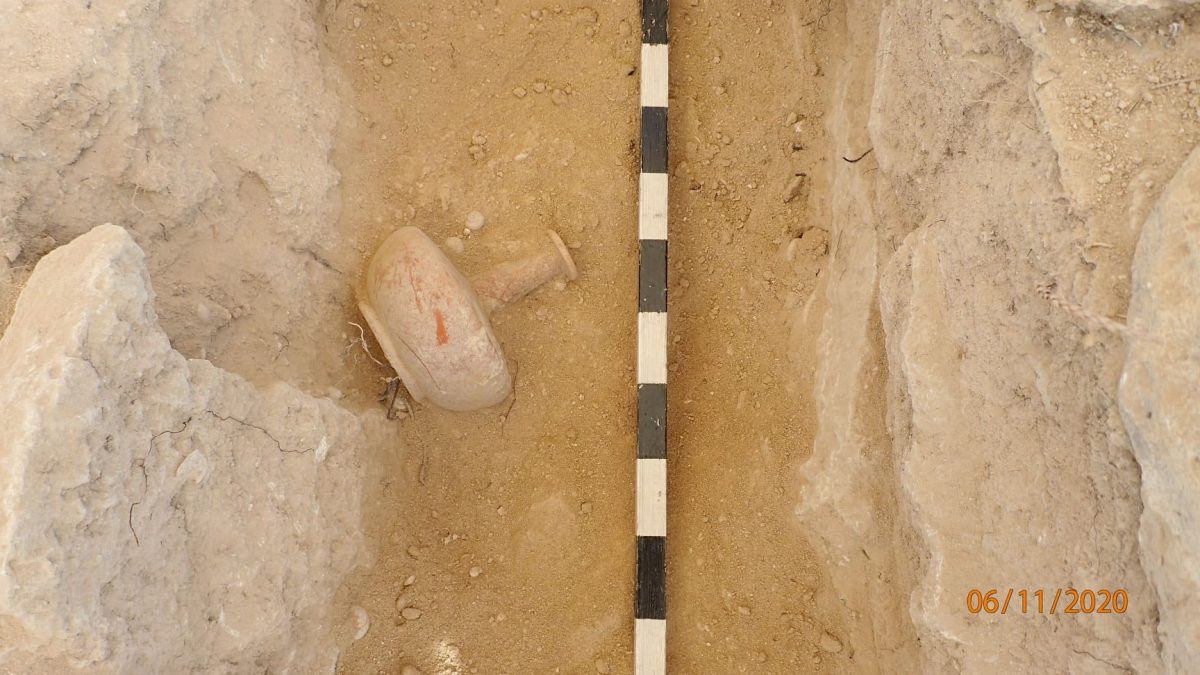 This year’s excavations of the Department of Antiquities at Agios Sozomenos, under the supervision of Dr. Despina Pilides, Curator of Antiquities, assisted by Mary Chamberlain, Senior Technician, lasted from May 13 until June 25, 2020 and, for the first time, focused exclusively on the Nikolides plateau. As a result, major questions regarding the nature and chronology of the fortification were investigated and the excavation was completed.

Further excavation to the south of the tower, in what may be considered as the interior of the walled area, yielded no finds, possibly also because of serious disturbances by modern activities. The tower was revealed on the three sides (north, south and west), as the south side, joining the circuit wall, was already revealed in previous excavation seasons. It was constructed directly on bedrock and was built of rectangular slabs placed horizontally on a lower course of large unworked stones. The outer face was dressed with rectangular ashlars also placed horizontally and carefully worked cornerstones. Many of the ashlars are missing indicating stone looting over the ages. The tower, although not tying with the circuit wall, was of the same construction as the circuit wall. It measures 15×7.5m and is preserved to a maximum of six courses of stones with a maximum preserved height up to 2m. The circuit wall is preserved to a height of maximum 1.5m. The staircase of ashlars and adjoining stone platform giving access to the tower were revealed in previous years and so were a series of parallel channels from east to west, possibly for water drainage.

Further investigation on the northeast side clarified the nature of the circuit wall and the construction method as well as its relation to the wall of irregular stones on the interior of the circuit wall. It ran parallel to the circuit wall and seems to have been an older phase. This wall fell into disuse and its stones were reused to build the circuit wall connected to the tower. The space between this wall and the exterior circuit wall, the later phase was filled with a thick layer of almost completely sterile sandy fill, obviously homogeneous and the result of a single action. The old wall was demolished at one point, where a foundation deposit between the two walls was found, enclosed within upstanding stones, secured between the old and the new phase of the wall. In the same sandy fill five intact vessels were found, a Red Slip lagynos, a skyphos with raised handles and dark slip, a small bowl with incurving rim and a dark slip and two Megarian bowls with impressed decoration, all of Hellenistic date. It was thus obvious, that the old wall was demolished and a new wall and tower was built in its place, in the Hellenistic period, a completely new piece of information that revokes what was hitherto believed, namely that the ashlar tower dated to the Late Bronze Age, on the basis of surface finds.

Further excavation revealed the floor, made of a layer of plaster and a kind of gravel below, directly above the natural bedrock. The extension of the parallel channels found last year was revealed; they are in the floor just above bedrock, possibly for drainage or collection of rainwater in the depression noted a little further to the west in the last excavation season. Above the fine floor where the channels were made, a layer of plaster mixed with stones may represent a later floor, at a time when the channels were disused.

Excavation on the east side of the plateau revealed walls forming large irregularly shaped rooms (narrower on the side of the slope), adjoining a wall running along the escarpment of the plateau, possibly with corridors in between them. Most of the exterior wall, which seems to have been constructed in the same way as that on the north side of the plateau, was eroded. Further confirmation for the chronology of this wall and the rooms adjoining was provided by the stratigraphic sequence of the wall remains; one of the dividing walls of one of the rooms (north wall of Room 6) is actually constructed on top of the older circuit wall which is only partially preserved at this very steep slope of the plateau. At the same time, large slabs, obviously belonging to the old fortifications were reused as entrances or cornerstones for these rooms.

Indeed, on the east side the outline of the old wall was traceable, as large upstanding stones reaching a height of 0.7 to 1m. and width 1-1.4m. in a line resembling the “Cyclopaean” type of wall known from Late Bronze Age sites, such as Enkomi, Maa-Palaeokastro etc. It is likely that large parts of it may have eroded on the downslope of the plateau. In addition, at a small distance on the side on the downslope of the plateau, a tomb was located carved in the bedrock, looted, its interior already used in modern times for the construction of a platform of cement. Access to the interior was through a small staircase of three steps on the northwest side and a small niche was preserved on the south side of the tomb. The cleaning of the interior of the tomb did not yield any finds and the date of the tomb remains unknown.

The new unexpected result of this year’s excavation season adds an important and unknown element to the history of the fortification at the plateau of Nikolides. The ashlar wall, considered to be of Late Bronze Age date, on the basis of surveys made in the past, does not belong to the Bronze Age but to the Hellenistic period. The Late Bronze Age wall is of a completely different construction and is not preserved on the north side of the plateau as it was replaced by the new defences. This opens a new chapter concerning the largely unknown history of defensive or military architecture in inland Cyprus in the Hellenistic period. It is not surprising of course that such a location would have been chosen as the plateau oversees the entire surrounding area and the accesses to the sea both towards the east and the south, and, if the resources of the copper-bearing areas on the Troodos foothills were the object of the sought after protection, there is no better place to ensure supervision than the plateau at Nikolides. Thus, many centuries after, the old Late Bronze Age wall, which was probably constructed for largely the same reasons, was demolished, its stones reused to build a new wall for the new regime, following the conquest of Cyprus by the successors of Alexander and the abolition of the city- kingdoms, including neighbouring Idalion.

On completion of the excavations, documentation and drone photographs, the site was partly backfilled, as a first measure of protection of the archaeological site.