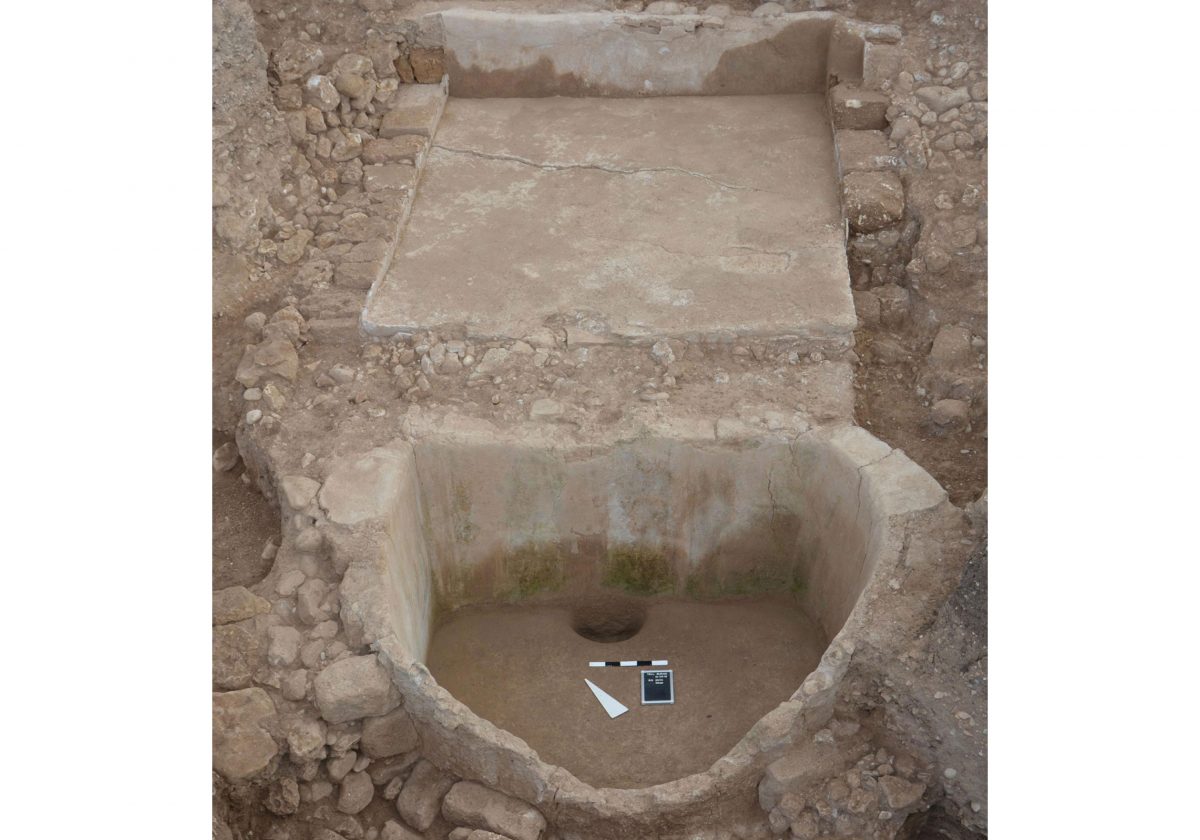 The first Iron Age wine press in Lebanon, the earliest known in Southern Phoenicia, has been revealed in the ancient settlement of Tell el-Burak following excavations by a team of Lebanon and Germany based researchers (the American University of Beirut (AUB), Eberhard Karls University Tübingen). The finds and their study were published recently through the journal Antiquity; the paper is available to view online (here).

As stated in the study’s abstract, “despite the importance of wine in the Iron Age Mediterranean, known structures associated with its production are rare”. But now “recent excavations at Phoenician Tell el-Burak have now revealed the first Iron Age wine press in Lebanon”.

The wine press has been located on the slope of the Tell to the south of a terrace wall bordering the site; a well-documented Iron Age Phoenician settlement which is excavated since 2001 by the Tell el-Burak Archaeological Project and it is connected with the nearby iconic Phenician city of Sidon.

The wine press consists of a rectangular treading basin, a surrounding wall of ashlar blocks and flat stone-slab foundation and a semicircular vat; according to the excavators, the structure’s state of preservation is deemed as ‘remarkable’. Its position on the slope of the settlement’s hill represents something usual, seen with other ancient wine presses in the Levant in order to take advantage of the difference in elevation to allow the must to flow. Built of stone and plaster (and not hewn in the bedrock as in other cases of ancient wine presses), it finds parallels with examples from Israel: two Late Bronze Age presses from Aphek and four ones from  Ashkelon who, like Tell el-Burak, date in the 7th c. B.C. Date-wise, the newly found wine press is important as, while such structures attest in the Levant since the Chalcolithic era, this is the earliest one found in the area known in antiquity as Phoenicia and also in modern day Lebanon.

Of particular importance, however, is the fact that the wine press was plastered and its plaster survives in good condition. This alone led to macroscopic and archaeometric comparison with two other plastered installations found at Tell el-Burak and likely dated to the 7th c. B.C.; a plain structure in the room of a house and a basin-like structure found beneath the floor of the courtyard of another house with storage-like facilities.

Archaeometric analyses of plaster samples showed that the plaster used in the wine press was produced “from the calcination of limestone” and it is identified as lime-based plaster. Comparison with samples from Tell el-Burak’s three other known plastered structures also showed the sharing of a local and innovative tradition of plaster production; this tradition is characterized by the use of lime-based plaster in which grog is added as the principal aggregate. “It is notable that grog was very rarely used as a tempering agent in pottery production in pre-classical Lebanon, and it is found in the amphorae at Tell el-Burak. This strengthens the hypothesis that the addition of grog to plaster was a well-defined technological choice not influenced by environmental constraints, especially given the local presence of microfossil- and shell-rich sand that could itself have been an ideal source for aggregates”, the study’s authors state. And they continue: “Although the exact chronology of the plastered installations at Tell el-Burak remains uncertain, they were probably built during the seventh century B.C. The wine press may have already been in use during the first occupation of the settlement (phase E: c. 725–650 BC). If this were the case, it would indicate that the addition of grog into lime plaster was employed at Tell el-Burak since the earliest phase of the settlement, and could be considered the first evidence of such a practice in the Phoenician homeland. Nevertheless, the settlers of Tell el-Burak probably adopted this tradition from elsewhere, with the most likely candidates being the pre-existing settlements in this region, such as Sarepta and Sidon (the latter considered to have re-founded Tell el-Burak”.

As a result, the excavation and study of this early Phoenician wine press offered new data on the use of wine presses in Southern Phoenicia as well as the composition and technology of Iron Age lime-plaster production. All in all, these results contribute to the wider discussion of Phoenician technology in the broader Iron Age Mediterranean.