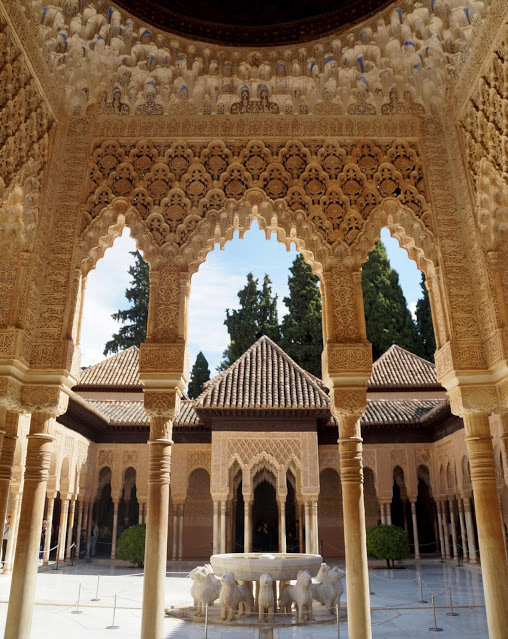 Unknown details identified in the lions’ courtyard at the Alhambra

Through drawings, researchers from the University of Seville, the École Polytechnique Fédérale de Lausanne (Switzerland) and the University of Granada have identified details hitherto unknown in the muqarnas of the temples of the Lions’ Courtyard at the Alhambra in Granada, a UNESCO World Heritage Site.

In order to better understand and facilitate the conservation of these fourteenth-century architectural elements, following a review of numerous repairs performed over the intervening centuries, a novel methodology was followed based on three complementary graphic analyses: first, outstanding images from the seventeenth to the twentieth centuries were reviewed; then new computer drawings were made of their muqarnas, following the theoretical principles of their geometrical grouping; and finally, a three-dimensional scan was made to ascertain their precise current state from the point cloud obtained.

The comparison of drawings has allowed us to verify for the first time that the muqarnas of the two temples have a different configuration and different number of pieces. In addition, geometric deformations have been detected in the original Nasrid design, identifying hitherto unknown pieces, plus other deformations due to the various repairs from major threats that the temples and their muqarnas have survived for centuries, despite their fragile construction.

“For the first time, this article documents and analyses details that were hitherto practically absent from the scientific literature”, says Antonio Gámiz, professor at the University of Seville and co-author of this work.

The muqarnas are one of the most unique architectural episodes of the Nasrid Alhambra and of medieval Islamic art because of their sophisticated three-dimensional geometrical construction. They are small prisms that are grouped together and create a great diversity of spatial configurations, adapting their composition to very diverse architectural situations in cornices, arches, capitals and vaults. They reached a virtuous zenith during the reign of Muhammad V (1354-1359 and 1362-1391) when crucial works were undertaken in the palaces of the Alhambra.

The findings are published in Sustainability.