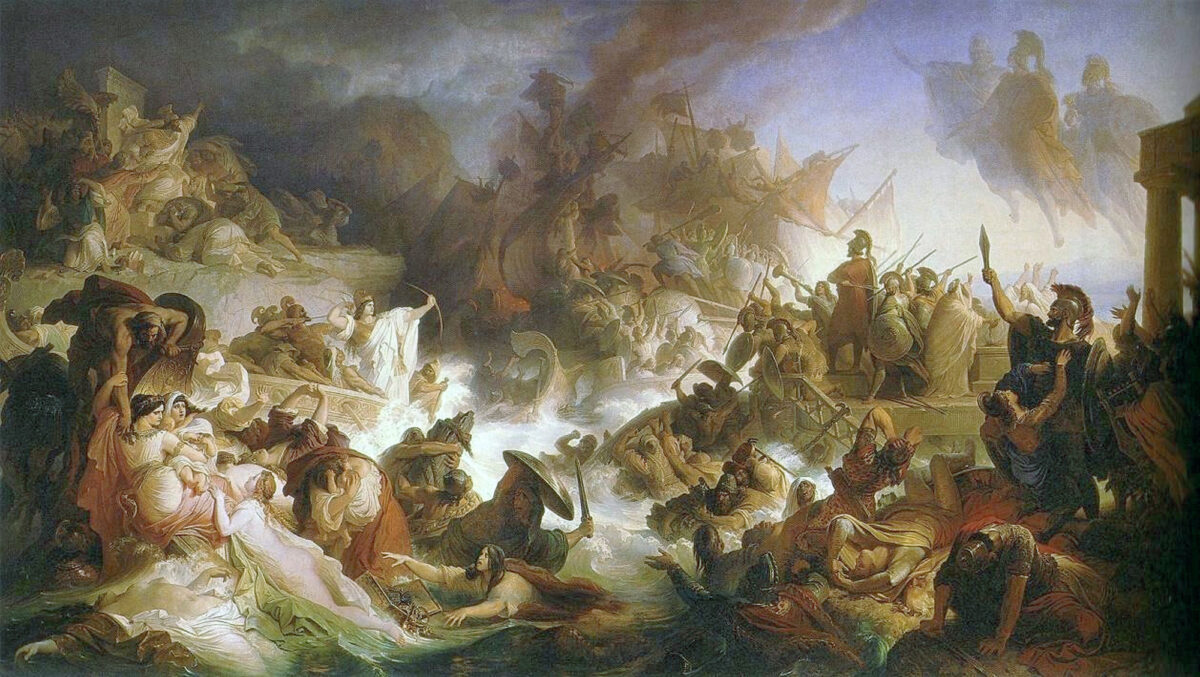 This is shown in a study headed by the academic C. Zerefos

The choice of the place of conflict with the Persians in Salamis was meticulously studied by the ancient Greeks and not by chance, since it was based on knowledge of the local climatic conditions. This is shown in a new study by the Research Centre for Atmospheric Physics and Climatology of the Academy of Athens headed by professor Christos Zerefos, which was published in the international scientific journal Atmosphere.

This September marks the 2,500th anniversary of the naval battle of Salamis. At the end of September 480 BC the small Greek fleet by using excellent tactics and led by Themistocles, achieved one of the most decisive victories in history. The new study shows that the inspirational strategy of the great leader was largely based on the ancient Greeks and Themistocles himself knowing the climatological conditions, specifically the winds that blew in the Straits of Salamis,and  adapted their strategic planning accordingly to take advantage of their, the winds, daily fluctuations .

Scientific findings show that the combination of a northwest wind blowing during the night, with the sea breeze rising after 10:00 am formed a “pincer” of wind, which, as the day went on, trapped the Persian fleet in Salamis. The climatological  analysis of the prevailing winds in the straits where the naval battle took place was based on available meteorological station measurements, as well as data from reanalysis and modeling simulations (ERA5 and WRF) for the period 1960-2019, along with historical evidence from ancient sources (“The Histories” of Herodotus, “The Persians” of Aeschylus, et al.)

According to the results of the research, the climatological conditions that prevail today in the region are similar to those of 2,500 years ago. The main cause of the meltemi, which generally blows from northern directions in the Aegean during the warm season, is the combination of the monsoon low, ie a thermal low that is created over the wider area of the Indian subcontinent, with the high pressures that prevail during the summer over the Balkans and Central Europe.

The above combination results in the creation of an enhanced northerly current in the Aegean called “Etesian” (meaning in Greek “annually recurring”). These climatic conditions were first described by Aristotle in his “Meteorology”. On a local scale, the weakening of the meltemia in September favors the prevalence of smaller systems of currents, such as sea breezes (batis-boukadoura).

The Greeks were knowledgeable about the local climate and adapted their strategic plan accordingly. During the night the Persian fleet took up battle positions on the coast of Attica (Amfiali-Perama). With the first light of day, however, instead of trying to escape, as the Persians expected, the Greek ships also appeared lined up in battle formation on the side of Salamis.

When the Persian fleet moved against the Greek ships, these moved in the opposite direction, rowing in coordination  up to the coast of Salamis. According to Plutarch, this manoeuver was part of Themistocles’ strategic plan and aimed to draw the Persians deeper into the straits and delay the conflict by waiting for the wind to change. Indeed, after 10:00 the wind turned southwest (a sea breeze) and only then did the Greek counterattack begin.

The sea breeze, combined with the narrowness of the canal, disorganized the Persian fleet. The bulkier Persian ships were more difficult to steer, as they were turned sideways by the wind and the waves and so became an easy target for ramming by the Greek triremes.Moreover, the strong southeastern breeze did not allow the Persians to retreat swiftly to the open Saronic Gulf and transfer the conflict there.

Eventually, much of the Persian fleet was lost, while the rest of the ships fled to the Gulf of Faliro in the afternoon, when the winds completed their daily cycle and reverted once more to blowing from the northwest. According to Herodotus, “Zephyrus” the westerly wind carried the wreckage of the Persian fleet to the region of today’s Agios Kosmas, marking the end of the Persian presence in the Mediterranean.

Apart from Christos Zerefos the team included researchers from the Athens Academy Stavros Solomos, Ioannis Kapsomenakis and Christos Repapis and professor Dimitris Melas of the Aristotle University of Thessaloniki. The study was funded by the Mariolopouleio-Kanagineio Foundation for Environmental Sciences.