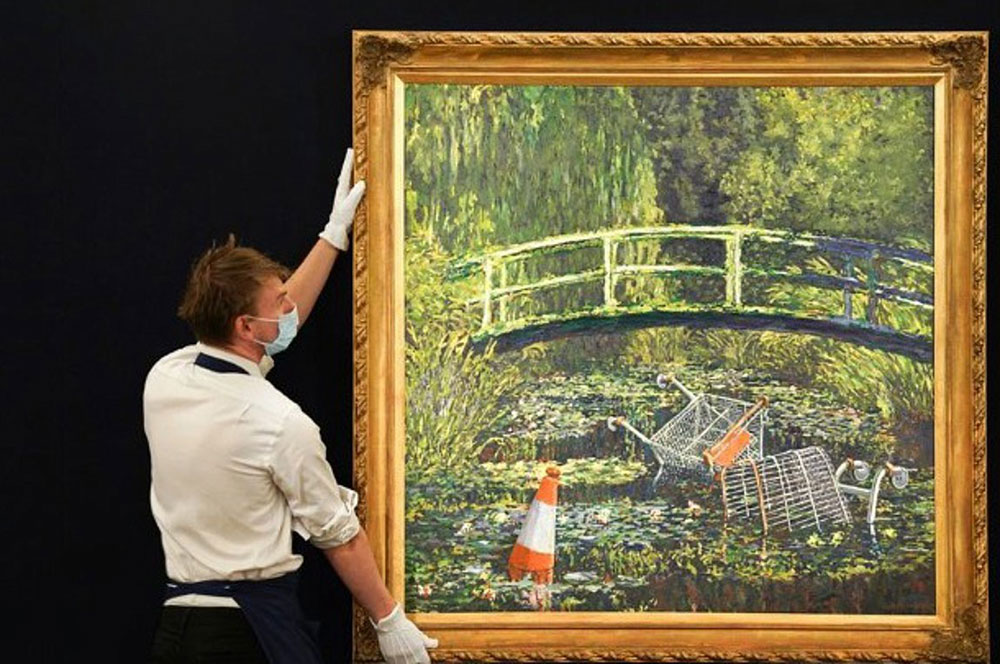 Banksy’s version of Claude Monet’s masterpiece is on sale

Auctioned by Sotheby’s in October

Banksy’s “Show me the Monet”, the street artist and activist’s version of Claude Monet’s 1899 Impressionist masterpiece “Le Bassin Aux Nymphéas” (“Water Lily Pond”) will be auctioned at Sotheby’s in London. Banksy’s oil paintings are estimated to fetch between $ 3.9 million and $ 6.5 million.

The anonymous artist from Bristol completed the work in 2005 as part of the “Crude Oils” series of works, in which he visits iconic paintings, making a kind of remix: Van Gogh’s “Sunflowers” wither — or have already withered — in a vase. Edward Hopper’s “Nighthawks” depicts an angry man wearing  boxer shorts with the flag of Great Britain, seconds after he has broke the window of a bar with a chair. Andy Warhol’s work “Marilyn Monroe” features Kate Moss as Marilyn Monroe. The painting to be in October is Monet’s famous work, but the pond is full of overturned supermarket trolleys, while a road works cone bobs on the surface of the water.

“In one of his most important paintings, Banksy has taken the iconic depiction of the Japanese bridge in the famous garden of the master of Impressionism in Giverny and turned it into a modern illegal rubbish dump.” It is more like a canal than an idyllic pond of water lilies,” said Alex Branczik, Sotheby’s European Head of Contemporary Art. “Always prophetic as a voice of protest and social dissent, here Banksy sheds light on society’s indifference to the environment in favor of the wasteful excesses of consumerism”.

“Show me the Monet” was on display at Sotheby’s Art Gallery on New Bond Street at the end of last week and will travel to New York and Hong Kong before returning to London for the online auction.