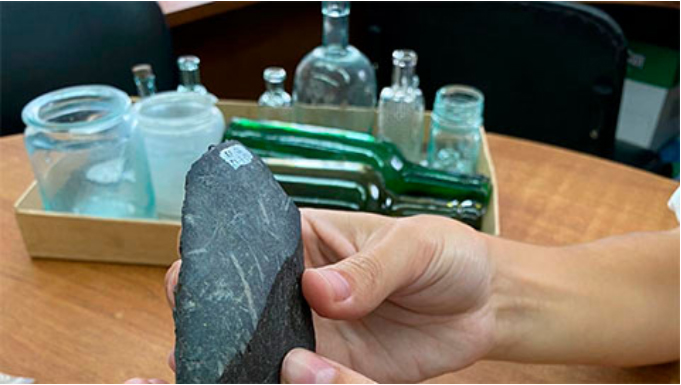 Archaeologists discover traces of a Neolithic site in Krasnoyarsk

Researchers of Siberian Federal University have conducted excavations in the area of Udachny settlement and discovered a unique site of ancient hunters and fishermen who lived on the banks of the Yenisei 6–8 thousand years ago. The researchers managed to retrieve more than 6 thousand items, including various tools, arrowheads, scrapers for working skins of fur animals, fragments of crockery, stone adornment for clothes.

More than a hundred years ago, the Krasnoyarsk intelligentsia and wealthy merchants built their summer cottages on the picturesque bank of the Yenisei. Later, in the Soviet times, state farm fields, dachas, sanatoriums and pioneer camps appeared in this place. Today the village has become an elite residential neighbourhood, the main cultural attraction of which is the Holy Dormition Monastery.

According to Polina Senotrusova, senior researcher at the Laboratory of Archaeology of the Yenisei Siberia, SibFU, the discovered site was a pleasant surprise for Krasnoyarsk researchers.

“You can unexpectedly find areas with ancient cultural layers, digging, like we are doing, a cultural object of the late 19th–20th centuries (the summer house of the bishop of Yeniseysk Governorate). We retrieved things from a relatively recent past and then, at greater depths, discovered various stone tools and found several bonfire sites. It was a Neolithic site where people lived for a short time. They hunted, fished, cooked, and curried animal skins. The found objects supported this thought. We also found some rare items of the Early Bronze Age, when the first metal items began to penetrate into the territory of the Yenisei Siberia,” said Polina Senotrusova.

The finds of the Stone and Bronze Age were fortunate enough as the succeeding layers which could tell about other periods in the history of Udachny, were destroyed due to the active ploughing in the past and modern development area there.

“Some of the objects found can be associated with the Ust-Bela complex which was named for the reference works on the Belaya River in Irkutsk region. The bearers of this tradition occupied a vast territory along the Yenisei and the Angara up to Baikal. We know this for sure thanks to the sort of ceramics that archaeologists have been and are still finding in these territories. Ust-Belsk crockery was ornamented from the rim to the very bottom and often had complex figures depicted on it: waves, spirals, crosses,” the scientist continued.

SibFU archaeologists managed to restore fragments of a huge clay pot. Judging by a wide (more than 40 centimetres in diameter) neck, this pot was a container for storing supplies — nuts or dried berries. And of course, what is the Stone Age without stone tools? A fragment of a blade of a carefully processed stone insert knife, according to Polina Senotrusova, can be considered an unusual artefact. Such knives had a wooden or horn handle. This knife is unusual because of its large size — they were normally much smaller.

“We found some tiny arrowheads the size of a pumpkin seed. They are so carefully and skillfully processed that even now they can wound a finger. A light tip was attached to the wooden shaft of an arrow; such arrows were used for hunting both small birds and large animals. We also found many miniature and large scrapers, which were used to scrape off the flesh and veins from animal skins; and their “design” had not changed significantly since the Paleolithic,” the experts noted.

The discovery of an above-ground dwelling with a hearth, around which items of the Early Bronze Age were found, became unique. Archaeological complexes of this period in the vicinity of Krasnoyarsk are rare, and an undoubted success is finding of, for example, polished stone pendants-patches for clothes, like those that were excavated by the researchers of Siberian Federal University, ceramics, and household items made in the same style.

“From these teardrop adornments with neatly drilled holes, we can infer about a kind of jewellery people wore in the middle of the 3rd millennium B.C. Most likely, they made up a necklace. They also found ceramics decorated with impressions of a thin twisted cord. Such ceramics with textile patterns on the surface are typical for this early period of the palaeometal,” the scientists said.

In addition to man-made artefacts, the archaeologists found fragments of animal bones at the ancient site. Now, these finds are being studied by archaeozoologists from Irkutsk who are reconstructing the appearance of the traditional prey of the ancient Siberians. Some of the bones belong to roe and elk; bones of a bison that inhabited Eastern Siberia during the early Holocene were found slightly below the level of the finds of the Neolithic and Bronze Age.

Krasnoyarsk residents will see the best finds of Krasnoyarsk archaeologists as part of the current exposition of the Uspensky Cultural and Historical Centre after mid-October 2020.