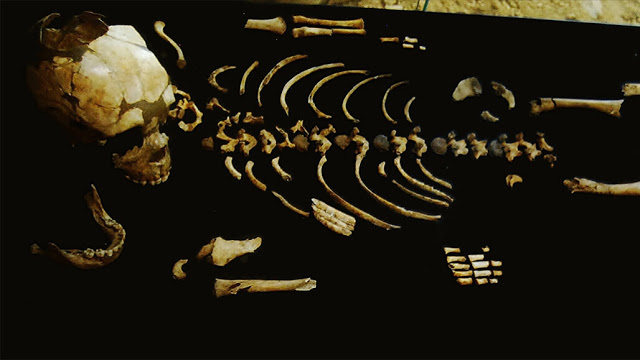 Newborn Neanderthals had a robust and broad thoracic cage

A recent study published in the journal Science Advances shows that newborn Neanderthals possessed a broad thoracic cage similar to adults, capable of sustaining the demanding energy expenditure of a large and broad body. The study was led by Daniel García Martínez, a paleoanthropologist at the Centro Nacional de Investigación sobre la Evolución Humana (CENIEH). This finding implies that the Neanderthal thorax was genetically determined and not the outcome of development, a point of major evolutionary significance, as it would have been inherited from earlier species like Homo erectus.

Genetic determination implies that the differences between human species were already present at birth, and would have become only slightly more marked as individuals grew. This means that the shape of a newborn Neanderthal thorax differed from the modern thoracic cage of Homo sapiens. Nevertheless, the similarities in thoracic shape and development between Neanderthals and other species like Homo erectus suggests the hypothesis that their stocky build was not only the result of genetic inheritance transmitted from parents to children, but could also have been inherited at the evolutionary level.

In comparison with modern humans, the adult Neanderthal thorax was shorter, slightly deeper and much wider. These anatomical traits are related to the Neanderthal body, with its broad pelvis, robust bones and strong musculature. It would also be linked to the metabolic demands of these hunter-gatherers, who would have needed considerable amounts of energy and oxygen. Nonetheless, up to now, it was not known whether these differences were already established at birth or appeared later, during development.

To look into this question, Daniel García Martínez, together with an international team of experts, used virtual reconstruction and traditional and geometric morphometry to reproduce, for the first time, the thoracic shape of four Neanderthal individuals. These reconstructions, performed for Neanderthal remains from three countries, show how they evolved from birth up to three years of age: Mezmaiskaya 1 (Russia), Le Moustier 2 (France), Dederiyeh 1 (Syrian Kurdistan) and Roc de Marsal (France).

“Our results indicate that the thoracic cage of newborn Neanderthals, just as for other anatomical regions like the mandible, already presented differences from our species; what we observe in newborn Neanderthal thoracic cages is that they were deeper and shorter than in modern humans, as can also be seen in adults,” says García Martínez.

“At the moment of birth, Neanderthals already had different brains and mandibles, so it makes sense that their thorax morphology should also be determined genetically and be found in newborns,” say professors Christoph Zollikofer and Marcia Ponce de León, co-authors at the University of Zurich.

This investigation required arduous work to identify and organize the different thorax elements in Neanderthal children and newborns, because, as co-author of the paper Asier Gómez-Olivencia, of the Universidad del País Vasco, explains, “The ribs and vertebrae normally appear highly fragmented in the fossil record, which has traditionally made studying them very difficult.”

In addition, the study makes clear that this shape for the thoracic cage might not be exclusive to Neanderthals, as it is also seen in earlier species. “This morphology exemplifies the archaic condition shared with Homo erectus, and is probably related to great energy requirements, as Neanderthal infants also have a large nasal aperture,” says Markus Bastir, the second author and a researcher at the Museo Nacional de Ciencias Naturales, in Madrid (MNCN-CSIC).

This study sets a benchmark for the shape of the Neanderthal thorax at the moment of birth, and continues work on the evolution of the thoracic cage this same research team has been engaged in for years, in collaboration with different institutions around Europe. “Although we have spent years investigating the Neanderthal thorax and there is general consensus in the scientific community on this point, there is still a long way to go in studying how the human thorax evolved, as very little is known about this crucial body element in earlier species belonging to the genus Homo,” concludes García Martínez.