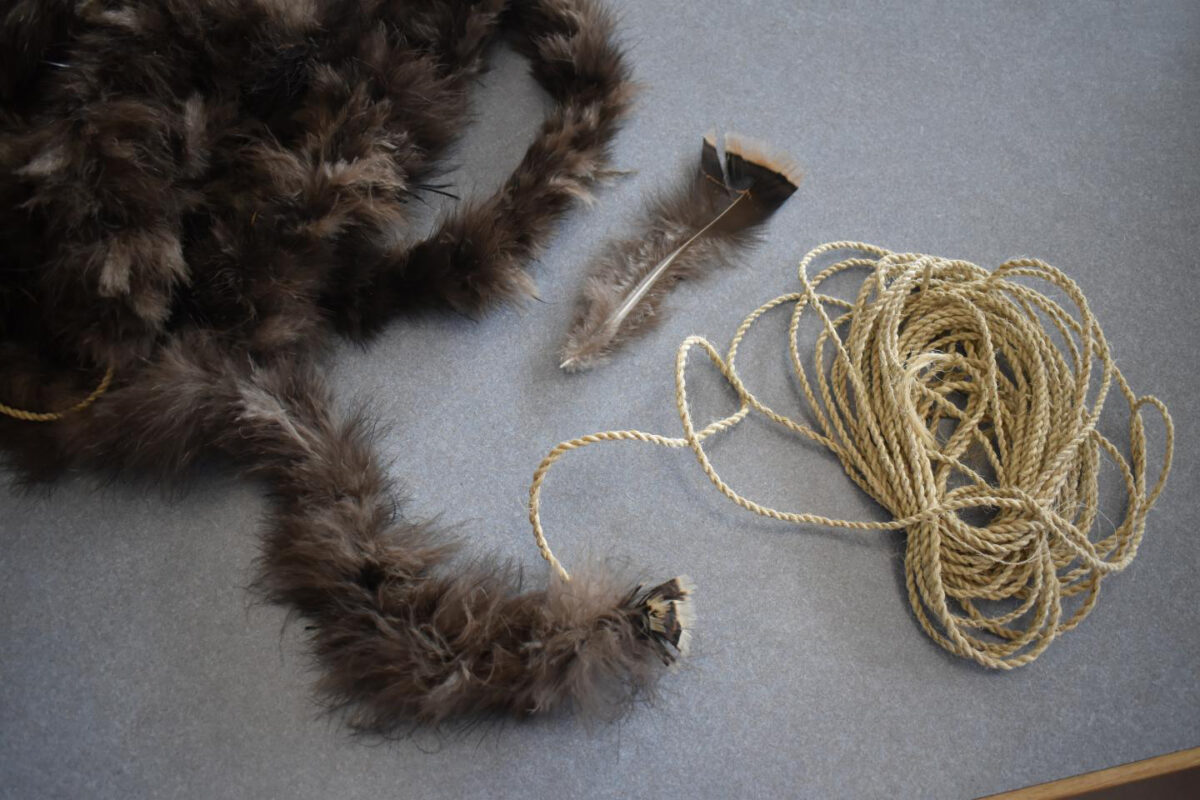 Ancient blanket made with 11,500 turkey feathers

By ancestors of present-day Pueblo Indians

The ancient inhabitants of the American Southwest used around 11,500 feathers to make a turkey feather blanket, according to a new paper in the Journal of Archaeological Science: Reports. The people who made such blankets were ancestors of present-day Pueblo Indians such as the Hopi, Zuni and Rio Grande Pueblos.

A team led by Washington State University archaeologists analyzed an approximately 800-year-old, 99 x 108 cm (about 39 x 42.5 inches) turkey feather blanket from southeastern Utah to get a better idea of how it was made. Their work revealed thousands of downy body feathers were wrapped around 180 meters (nearly 200 yards) of yucca fiber cord to make the blanket, which is currently on display at the Edge of the Cedars State Park Museum in Blanding, Utah.

The researchers also counted body feathers from the pelts of wild turkeys purchased from ethically and legally compliant dealers in Idaho to get an estimate of how many turkeys would have been needed to provide feathers for the blanket. Their efforts show it would have taken feathers from between four to 10 turkeys to make the blanket, depending on the length of feathers selected.

“Blankets or robes made with turkey feathers as the insulating medium were widely used by Ancestral Pueblo people in what is now the Upland Southwest, but little is known about how they were made because so few such textiles have survived due to their perishable nature,” said Bill Lipe, emeritus professor of anthropology at WSU and lead author of the paper. “The goal of this study was to shed new light on the production of turkey feather blankets and explore the economic and cultural aspects of raising turkeys to supply the feathers.”

Clothing and blankets made of animal hides, furs or feathers are widely assumed to have been innovations critical to the expansion of humans into cold, higher latitude and higher elevation environments, such as the Upland Southwest of the United States where most of the early settlements were at elevations above 5,000 feet.

Previous work by Lipe and others shows turkey feathers began to replace strips of rabbit skin in construction of twined blankets in the region during the first two centuries C.E. Ethnographic data suggest the blankets were made by women and were used as cloaks in cold weather, blankets for sleeping and ultimately as funerary wrappings.

“As ancestral Pueblo farming populations flourished, many thousands of feather blankets would likely have been in circulation at any one time,” said Shannon Tushingham, a co-author on the study and assistant professor of anthropology at WSU. “It is likely that every member of an ancestral Pueblo community, from infants to adults, possessed one.”

Another interesting finding of the study was the turkey feathers used by the ancestral Pueblo people to make garments were most likely painlessly harvested from live birds during natural molting periods. This would have allowed sustainable collection of feathers several times a year over a bird’s lifetime, which could have exceeded 10 years. Archeological evidence indicates turkeys were generally not used as a food source from the time of their domestication in the early centuries C.E. until the 1100s and 1200s C.E., when the supply of wild game in the region had become depleted by over-hunting.

Prior to this period, most turkey bones reported from archaeological sites are whole skeletons from mature birds that were intentionally buried, indicating ritual or cultural significance. Such burials continued to occur even after more turkeys began to be raised for food.

“When the blanket we analyzed for our study was made, we think in the early 1200s C.E., the birds that supplied the feathers were likely being treated as individuals important to the household and would have been buried complete,” Lipe said. “This reverence for turkeys and  their feathers is still evident today in Pueblo dances and rituals. They are right up there with eagle feathers as being symbolically and culturally important.”

In the long run, the researchers said their hope is the study will help people appreciate the importance of turkeys to Native American cultures across the Southwest.

“Turkeys were one of the very few domesticated animals in North America until Europeans arrived in the 1500s and 1600s,” Tushingham said. “They had and continue to have a very culturally significant role in the lives of Pueblo people, and our hope is this research helps shed light on this important relationship.”