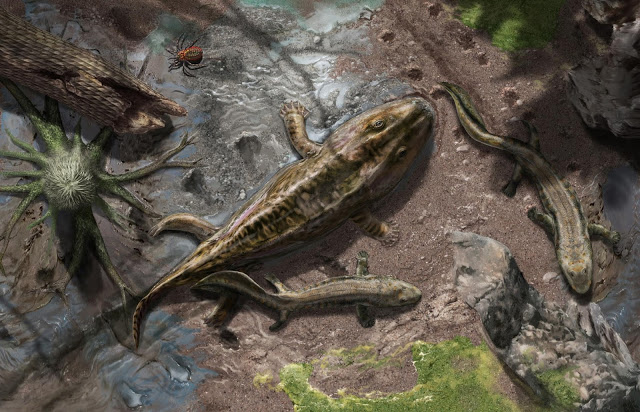 The water-to-land transition is one of the most important and inspiring major transitions in vertebrate evolution. And the question of how and when tetrapods transitioned from water to land has long been a source of wonder and scientific debate.

Early ideas posited that drying-up-pools of water stranded fish on land and that being out of water provided the selective pressure to evolve more limb-like appendages to walk back to water. In the 1990s newly discovered specimens suggested that the first tetrapods retained many aquatic features, like gills and a tail fin, and that limbs may have evolved in the water before tetrapods adapted to life on land. There is, however, still uncertainty about when the water-to-land transition took place and how terrestrial early tetrapods really were.

A paper published in Nature addresses these questions using high-resolution fossil data and shows that although these early tetrapods were still tied to water and had aquatic features, they also had adaptations that indicate some ability to move on land. Although, they may not have been very good at doing it, at least by today’s standards.

“Because the fossil record of the transition to land in tetrapods is so poor we went to a source of fossils that could better represent the entirety of the transition all the way from being a completely aquatic fish to a fully terrestrial tetrapod,” said Dickson.

Two thirds of the fossils came from the historical collections housed at Harvard’s Museum of Comparative Zoology, which are sourced from all over the world. To fill in the missing gaps, Pierce reached out to colleagues with key specimens from Canada, Scotland, and Australia. Of importance to the study were new fossils recently discovered by co-authors Dr. Tim Smithson and Professor Jennifer Clack, University of Cambridge, UK, as part of the TW:eed project, an initiative designed to understand the early evolution of land-going tetrapods.

The researchers chose the humerus bone because it is not only abundant and well preserved in the fossil record, but it is also present in all sarcopterygians – a group of animals which includes coelacanth fish, lungfish, and all tetrapods, including all of their fossil representatives. “We expected the humerus would carry a strong functional signal as the animals transitioned from being a fully functional fish to being fully terrestrial tetrapods, and that we could use that to predict when tetrapods started to move on land,” said Pierce. “We found that terrestrial ability appears to coincide with the origin of limbs, which is really exciting.”

The humerus anchors the front leg onto the body, hosts many muscles, and must resist a lot of stress during limb-based motion. Because of this, it holds a great deal of critical functional information related to an animal’s movement and ecology. Researchers have suggested that evolutionary changes in the shape of the humerus bone, from short and squat in fish to more elongate and featured in tetrapods, had important functional implications related to the transition to land locomotion. This idea has rarely been investigated from a quantitative perspective – that is, until now.

When Dickson was a second-year graduate student, he became fascinated with applying the theory of quantitative trait modeling to understanding functional evolution, a technique pioneered in a 2016 study led by a team of paleontologists and co-authored by Pierce. Central to quantitative trait modeling is paleontologist George Gaylord Simpson’s 1944 concept of the adaptive landscape, a rugged three-dimensional surface with peaks and valleys, like a mountain range. On this landscape, increasing height represents better functional performance and adaptive fitness, and over time it is expected that natural selection will drive populations uphill towards an adaptive peak.

“We started to think about what functional traits would be important to glean from the humerus,” said Dickson. “Which wasn’t an easy task as fish fins are very different from tetrapod limbs.” In the end, they narrowed their focus on six traits that could be reliably measured on all of the fossils including simple measurements like the relative length of the bone as a proxy for stride length and more sophisticated analyses that simulated mechanical stress under different weight bearing scenarios to estimate humerus strength.

“What we found was that the humeri of the earliest tetrapods clustered at the base of the terrestrial landscape,” said Pierce. “indicating increasing performance for moving on land. But these animals had only evolved a limited set of functional traits for effective terrestrial walking.”

The researchers suggest that the ability to move on land may have been limited due to selection on other traits, like feeding in water, that tied early tetrapods to their ancestral aquatic habitat. Once tetrapods broke free of this constraint, the humerus was free to evolve morphologies and functions that enhanced limb-based locomotion and the eventual invasion of terrestrial ecosystems

“Our study provides the first quantitative, high-resolution insight into the evolution of terrestrial locomotion across the water-land transition,” said Dickson. “It also provides a prediction of when and how [the transition] happened and what functions were important in the transition, at least in the humerus.”

“Moving forward, we are interested in extending our research to other parts of the tetrapod skeleton,” Pierce said. “For instance, it has been suggested that the forelimbs became terrestrially capable before the hindlimbs and our novel methodology can be used to help test that hypothesis.”

Dickson recently started as a Postdoctoral Researcher in the Animal Locomotion lab at Duke University, but continues to collaborate with Pierce and her lab members on further studies involving the use of these methods on other parts of the skeleton and fossil record.