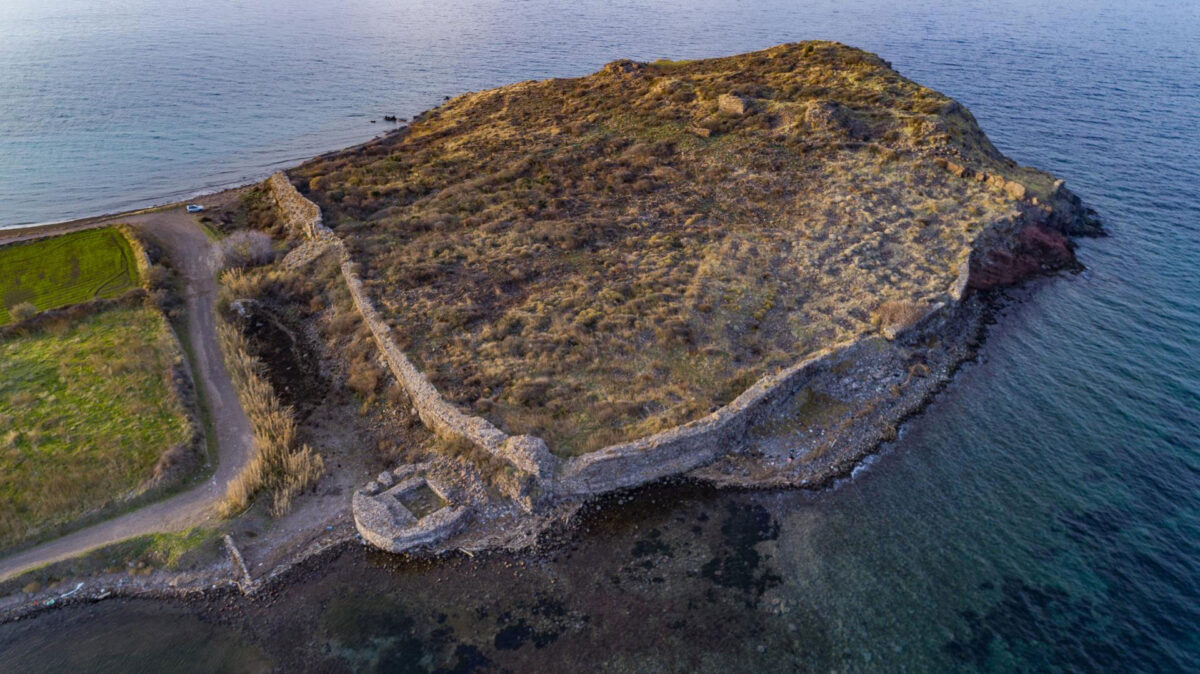 Three buildings that are archaeological findings of particular interest, were brought to light in the ongoing excavation by the Lesvos Ephorate of Antiquities in the castle of Agioi Theodoroi identified as ancient Antissa in western Lesvos. An arched building of the 7th c. BC was unearthed with abundant painted and grey and black pottery and two earlier rectangular buildings of the 8th and 10th centuries BC. This excavation find is of special significance as it confirms the historical continuity from the Late Bronze Age (1600-1100 BC) to the so called Dark Ages (11th-9th century BC) which mark the movements of tribes such the Aeolians to Lesvos.

The Castle of Agioi Theodoroi (also called Ovriokastro today) is situated on the peninsula of ancient Antissa, west of Molyvos and east of the coastal settlement of Gavathas.

It extends across a rocky hill, in a strategically important position controlling the sea crossing between Lesvos and Asia Minor. Literary sources and travelers testify to the castle being situated on a hill and named after the military Agioi Theodoroi who were also patron saints of the castle town by the same name. In 1422 the monk and traveler Buondelmonti refers to the castle of Agioi Theodoroi as one of seven on Lesvos, while synodal decisions refer to it as a castle town. Although the castle’s appearance is unknown, not being depicted in medieval manuscripts, it seems that at the end of the First Venetian-Turkish War (1461-1479) it was abandoned by the Ottomans and then completely destroyed by them.

In his historical work Lesviako Polyptycho (Multiple Aspects of Lesvos), I. Kontis states, regarding the location of the castle, that “the ancient city of Antissa was located in today’s deserted Ovriokastro, as the place was named after the castle built there during the rule of the Gateluzzi”. In 1890, mapping the territory of the ancient city, German archaeologist Robert Koldewey marks the boundaries of the area occupied by the city from the later medieval castle and the hill described as a citadel.

While conducting archaeological research of the ancient city, first in 1931 and 1932, English archaeologist Winifred Lamb, on behalf of the British School of Archaeology, carried out trenching outside Ovriokastro which confirmed the region’s habitation from the Late Bronze Age (last centuries of the 2nd millenium BC) to the Archaic period (late 7th-6th c. BC) but also to the Late Classical period (4th c. BC). The arched buildings found by her are particularly interesting, dating to the 8th and 7th c. BC and described as sacred.

In her excavations, Winifred Lamb also discovered a hill opposite Ovriokastro, part of archaic and classical fortifications and the city’s necropolis situated to the east and south.

The recent archaeological research by the Lesvos Ephorate of Antiquities with funding from the Public Investment Programme of the North Aegean Region aims to highlight the archaeological site of ancient Antissa, important for the history and archaeology of Lesvos.  According to the experts, it needs systematic excavation, mainly in the medieval castle, which is being excavated for the first time approximately 90 years after Lamb’s research in the greater area of the ancient city.

As the Head of the Ephorate of Antiquities of Lesvos, Pavlos Triantaphyllides, tells APE-MPE “the repeated collapsing of the walls exposed to the sea and the strong winds, the shapeless piles of stones and the image of desolation and abandonment, are clearly not appropriate for one of the five city-states of Lesvos in antiquity.”

For two years, the Ephorate of Antiquities of Lesvos proceeded with systematic surface cleaning, time-consuming deforestation of the vegetation that had covered the entire surface of the medieval castle, as a result of which the surviving building remains are not visible. “From the annual maintenance of the area, which covers an area of about 15 acres, amorphous stone piles were discovered throughout the archaeological site, which are associated with the destruction and desolation of the monument after the destruction of the castle by the Ottomans in 1462”, says Mr. Triantaphyllides, who notes that the goal of the archaeological service is to reveal the most important architectural remains preserved under the stone piles and “which give a painful picture of the condition of the castle, which clearly is not suited to its worth.”

For this reason, test excavations were made in the sea wall that extends along the medieval moat, in the wall with the five towers and in Ano Kastro.

The research on the five rectangular towers of the medieval wall focused on the 2nd and 3rd towers. Its construction was confirmed at least in the 13th-14th c. AD, i.e. during the Late Byzantine period, when Lesvos was handed over to the Gateluzzi as a dowry of the Palaeologans to Francisco Gateluzzo.

The excavation of tower 3 revealed a monumental gate with older built-in architectural members and a stone paved floor, dating to the 14th c. AD, with two passages to the east and north, and which is preserved at a height of four meters below the stone piles. The monumental access indicates that the level of operation of the medieval castle is much lower than the one that survives today, and therefore the continuation of the archaeological research will reveal in a satisfactory height the morphology of the castle buildings.

Ceramics, metalwork and glass objects, as well as coins confirm its repair in the 14th c. and its abandonment by force, possibly its destruction by the siege of the castle by the Ottomans.

In Ano Kastro, an underground space of a rectangular tower in the form of a dome was found for the storage of grains in jars, coated with mortar, and with written decoration, while east of it, exceptionally preserved at a height of about two meters, rectangular rooms with paved floors, probably underground for the storage of pithoi, dating from coins of the 14th c. AD.

“The excavation continues in order to investigate older building remains that date back to older stratigraphic centuries” concludes the Head of the Ephorate of Antiquities of Lesvos Pavlos Triantaphyllidis.