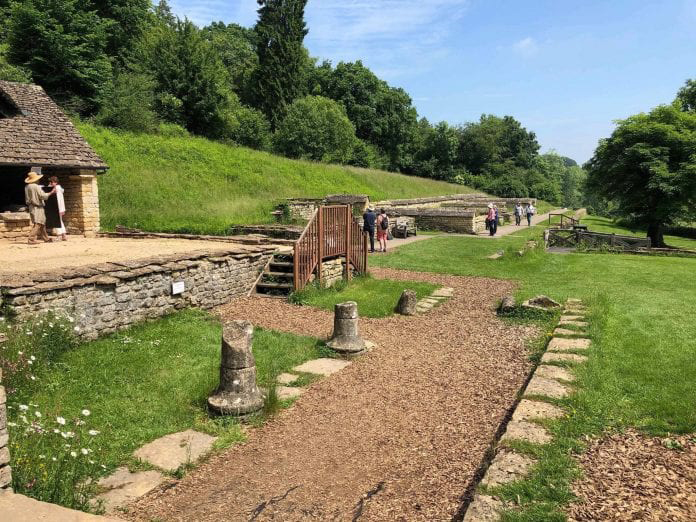 During excavations at Chedworth Roman Villa

Chedworth Roman Villa is one of the largest Roman villa complexes in Britain, built in several phases from the 2nd century, to the 5th century AD. The villa was first discovered in 1864, and was acquired by the National Trust in 1924, where the site has been part of a long-term conservation programme.

A study using radiocarbon dating has revealed that a mosaic within Room 28 of the villa was created during the middle of the 5th century, a period where a majority of Roman towns and villas had been abandoned and left to ruin.

Charcoal and bone sealed within a foundation trench in the north range of Chedworth Villa have provided radiocarbon dates that show that the wall could not have been built until after AD 424 and that a mosaic must be later than this date.

It is believed that the dated wall of the Villa was constructed to subdivide an existing room and a mosaic laid in the newly-created room. As with many floors where the central area saw more wear and tear, the best preserved parts of the mosaic are on the margins of the room.

The work that began in 2012 was part of a six-year programme of archaeological digs and research which is shedding new light on Chedworth Roman Villa and the history of Romans in South West Britain. Research and dating on the mosaic however have only recently been completed.

Martin Papworth, National Trust archaeologist explains, “The 5th century is a time which marks the beginning of the sub-Roman period, often called the ‘Dark Ages’, a time from which few documents survive, and archaeological evidence is scarce.

“After almost 400 years, Britain had been lost by Rome, units of the regular army and members of the civil service were either being withdrawn or no longer paid in cash and their wages in the form of coinage ceased to be brought into Britain by the central government. This saw production decline, and the craft and service industries became unsustainable.

“It has generally been believed that most of the population turned to subsistence farming to sustain themselves and, after the break with Rome, Britannia’s administrative system broke down into a series of local fiefdoms.

“What is so exciting about the dating of this mosaic at Chedworth is that it is evidence for a more gradual decline. The creation of a new room and the laying of a new floor suggests wealth, and a mosaic industry continuing 50 years later than had been expected.

“This 5th-century date was so different from what is generally thought that after discussions with the National Trust’s expert advisors, a second radiocarbon date was needed alongside pottery analysis before I could be sure.”

The 5th century mosaic in Room 28 is an intricate design. Its outer border is a series of circles in ‘guilloche’ (a braided band) alternately filled with flowers and knots. It fits precisely within the room space bounded by the newly dated wall.

However, this mosaic is of poorer quality than the well-made mosaics dating to the late 4th century in the Villa, and contains several mistakes in its design, possibly evidence that the mosaicists had become less skilled by this time.

Martin continues: “It is interesting to speculate why Chedworth Villa’s owners were still living in this style well into the 5th century. It seems that in the West Country, the Romanised way of life was sustained for a while. Many large, richly decorated Roman villas have been found in the countryside around Cirencester, which is around 8 miles from Chedworth.

“By the end of the 4th century, Cirencester was the second largest Romano-British town after London and had become the capital of a separate province ‘Britannia Prima’. The wealth of these many lavish villas surrounding this provincial capital surpassed that of any group found across the rest of Britain. Perhaps this territory occupied a more protected area, sheltered from the hostile raids taking place from the north and along the western and eastern coasts.

“We have also made occasional finds of 5th-6th century pottery from Africa and Palestine amongst the ruins at Chedworth which are also strong indicators of sub-Roman high-status occupation at this time. Scraps of similar pottery which have been found in other local villas suggest that Chedworth was not a unique survivor during the troubled times of the 5th century.”

Dr Stephen Cosh has written about all of Britain’s known Roman mosaics. He says: “I am still reeling from the shock of this dating. There are very late Roman mosaics in the area for which archaeology can only ever say they must be later than a particular date, without being able to say how much later.

“But none has ever been suspected to be this late. It will be important to research further sites in the region to see whether we can demonstrate a similar refurbishment at other villas which continued to be occupied in the 5th century. But there is no question that this find at Chedworth is of enormous significance – it’s tremendously exciting.”

The 5th century mosaic, along with some other mosaics in the exposed North Range at Chedworth, has been re-buried following the excavation to protect it from the weather. However, photographs and a 3D fly-through video of the mosaic can be seen online.

The National Trust is hoping to source funding to produce an augmented reality experience to showcase this and other mosaics uncovered on the North Range.