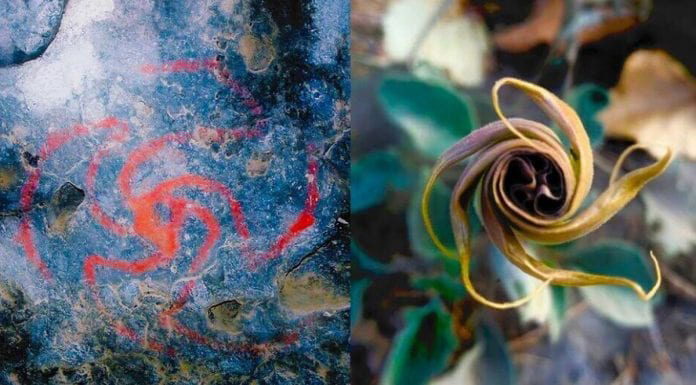 The Chumas (meaning “bead maker” or “seashell people”) are a Native American people who historically lived in the central and southern coastal regions of California.

The study was led by researchers from the University of Oregan, who found wads of chewed plant fibres (also called quids), inserted into crevices in the cave’s ceiling dating from around 400 years ago, that presents the first clear evidence for the ingestion of hallucinogens at a rock art site.

A chemical and microscopic analysis using liquid chromatography−mass spectrometry (LC-MS) revealed that the fibres were mainly from the Datura wrightii, commonly known as the sacred datura, a plant that has been used by Native Americans during ceremonies and rites of passage for centuries.

The study also revealed traces of hallucinogenic alkaloids, which can induce auditory and visual hallucinations, and sometimes death depending on the strength of the active compounds. A three-dimensional (3D) analyses of the fibres also presented that they were likely masticated and thus consumed in the cave.

Pinwheel Cave was named for a red pinwheel painted on the cave ceiling, which during the summer solstice sunlight travels across the pinwheel which was thought to suggest that the cave served for seasonal ritual celebrations. Excavations have now shown evidence of food processing, cooking fires, and other domestic activities, indicating that the cave was less a site for rarefied shamanic practice and more a community hub where datura ingestion occurred alongside everyday communal activities.

Kristina Gill, an archaeologist from the University of Oregon said that “the art may depict the datura flower itself, which unfurls at dusk in a pinwheel-like pattern.” Also depicted is an insect that may represent a phingidae, which is a family of moths (Lepidoptera), commonly known as hawk moths. Gill added “Datura attracts hawkmoths as one of its key pollinators, so it wouldn’t come as a surprise to see the two species represented together.”