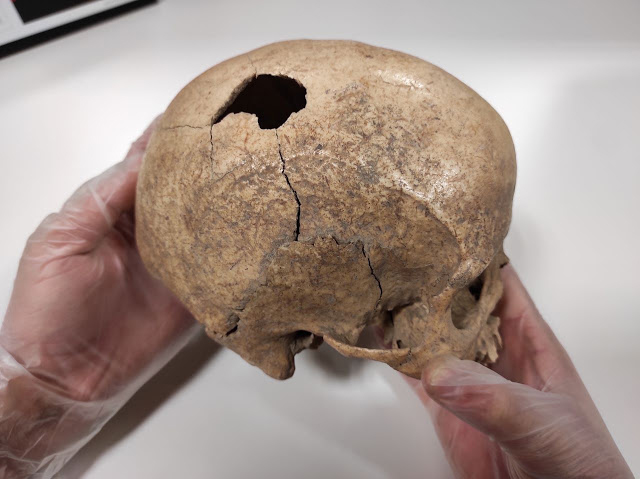 A violent death in the Cova Foradada about 5,000 Years Ago

The traumas that can be observed in the human skeleton constitute the most direct evidence of the episodes of interpersonal violence and are frequently documented in the archaeological record since they have accompanied us throughout all periods of our history. The first cases have been dated to the Paleolithic, but it is from the Neolithic onwards that this behaviour increases exponentially. Blows with blunt objects, impacts of projectiles, or cut marks are some examples of injuries linked to violent events. However, determining the type of object that was used as a weapon is not always possible.

A new study published this week in the International Journal of Paleopathology, carried out by research staff from the del Institut Catala de Paleoecologia Humana i Evolucio Social (IPHES-CERCA), the Rovira i Virgili University (URV) and the University of Barcelona (UB), has identified a case of cranial trauma at the site of Cova Foradada (Calafell, Tarragona). This is an individual of about 50 years of age, who died violently from the impact of a stone adze, a type of hoe, about 5000 years ago.

Miguel Angel Moreno-Ibanez, a predoctoral researcher at IPHES-CERCA, and main author of the article points out that the fracture pattern observed in the cranium “has allowed us to infer the type of object that was used to cause the death of this individual, as well as the direction of the blow”. The skull was found in 1999 during a rescue excavation in the Cova Foradada, in Calafell (Tarragona). It belongs to a man about 50 years old and is part of a collective burial from the Late Neolithic – Chalcolithic period (5060–4400 years before the present).

The fracture has been analyzed with both stereomicroscope and computerized microtomography (micro-CT), is in the right parietal, and shows no evidence of healing.

“The radial fissures, some of them with a considerable opening, the internal bevelling and the acute fracture angles inform us that it is a perimortem trauma, that is, around the time of the individual’s death”, comments Moreno-Ibanez. Furthermore, this individual presents two antemortem injuries, in the occipital and in the right temporal bones, which have completely healed, and a postmortem fracture in the lower area of the occipital. Therefore, in this same skull, it is possible to observe the difference between antemortem, perimortem, and postmortem injuries.

“Cranial injuries are particularly interesting, since the head is the main target when the intention is to kill the individual, so this type of injury is often associated with the cause of death”, adds Miguel Angel Moreno-Ibanez. “The resulting fracture pattern indicates that a blunt object with a straight, pointed edge was used (“sharp-blunt trauma”), such as polished stone axes and adzes”, he says.

These objects have very similar morphology but differ in their position and form of use. The axes are hafted following the longitudinal axis of the handle, while the adzes are hafted in a transversal position. “For this reason, the dispersion of the force concerning the point of impact is different between the two cases”, says the same researcher. The fact that it has been possible to identify the point of impact in the cranial fracture of Cova Foradada has allowed inferring which of these objects was most probably used: the adze.

“The greatest destruction is located in an anterior position to the point of impact, so the blow was caused from the back of the individual, probably by a right-handed attacker”, says Miguel Angel Moreno-Ibanez. “Besides, a portion of bone was slightly sunken inwards in response to external pressure, so a lever movement was probably made to extract the adze from the skull after the blow”, he states.

As we can see, the study of the bones not only tells us about the people to whom they belonged, but also sometimes about how was their death, or what treatment they received after it. The case of Cova Foradada is an example of how, following forensic criteria, it is possible to reconstruct how a head injury occurred about 5000 years ago. Thanks to the analysis of the intrinsic factors of the fracture, such as the biomechanical properties of the bone and the fracture pattern itself, it has been possible to conclude about the weapon used, the direction of the blow, and the position of the attacker relative to the victim.