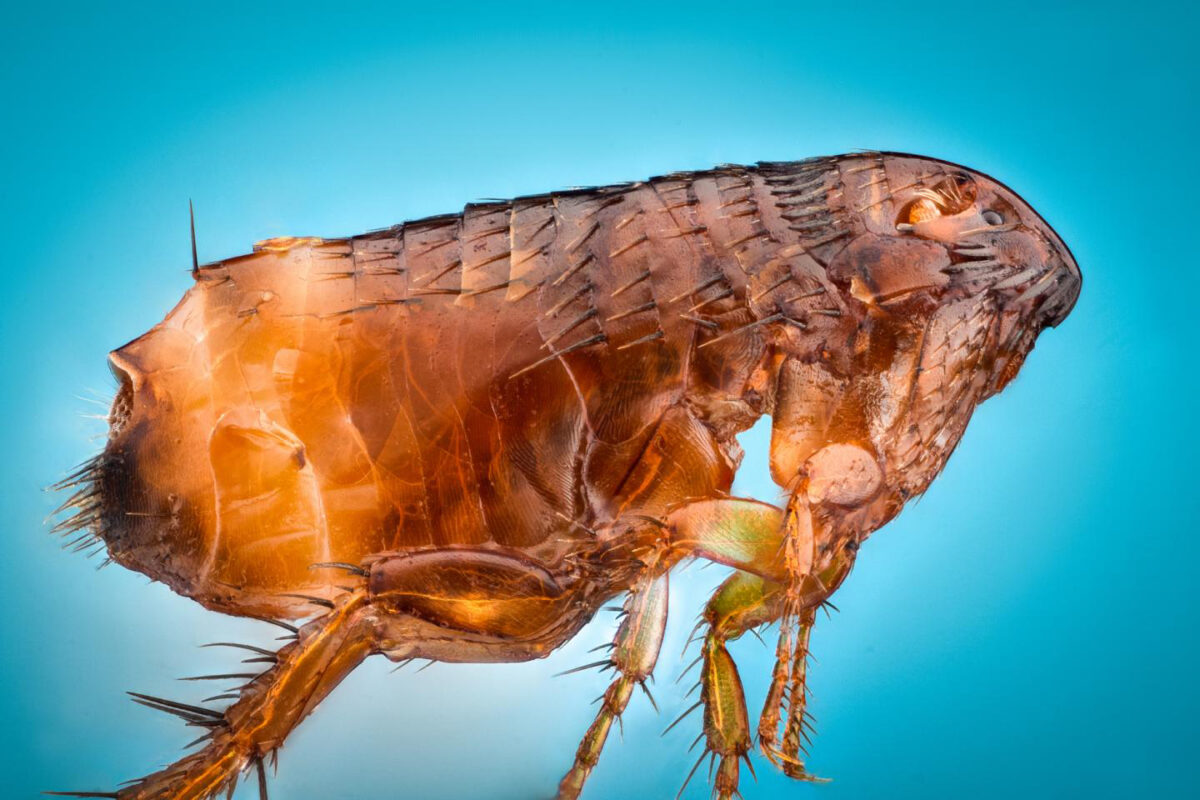 With almost every aspect of their biology and anatomy adapted to their specialized parasitic lifestyle, fleas have long troubled evolutionary biologists. Their early evolution and position on the insect tree of life remained a mystery even after the first flea genomes were sequenced over the last decade.

Now, however, researchers from the Nanjing Institute of Geology and Palaeontology of the Chinese Academy of Sciences (NIGPAS) and the University of Bristol in the UK have solved this long-standing evolutionary riddle.

Of all the parasites in the animal kingdom, fleas hold a pre-eminent position. After all, the Black Death, caused by a flea-transmitted bacterium, was the deadliest pandemic in the recorded history of mankind.

“Despite their medical significance, the placement of fleas on the tree of life represents one of the most persistent enigmas in the evolution of insects,” said Erik Tihelka, undergraduate at the University of Bristol who led the study.

Over the years, researchers have proposed many hypotheses regarding the origin of fleas, most arguing that their closest relatives lie among the flies or scorpionflies, or both.

In this study, the scientists used genome-scale sequences of fleas and all their possible close relatives, then analyzed them using new statistical methods. By employing more sophisticated algorithms to test all historically proposed hypotheses and search for new potential relationships, the team came to an unexpected conclusion — fleas are a group of highly modified, parasitic scorpionflies.

Scorpionflies are a group of small- to medium-sized flying insects distributed worldwide. The new study suggests that the small scorpionfly family Nannochoristidae, which is endemic to the southern hemisphere and whose adults probably feed on nectar, is the closest relative of all living fleas. Despite looking very unlike the flea we know today, the Nannochoristidae in fact share surprising anatomical similarities with fleas such as characteristics of the head and the sperm pump.

Why was the “flea mystery” so hard to solve?

“A close relationship between Nannochoristidae and the fleas has been proposed in several past molecular analyses but was treated as likely an error. Ancient evolutionary radiations leave behind subtle clues in organisms’ genomes that can only be recovered with sophisticated models of molecular evolution. Moreover, the nannochoristids are a quite rare and little-studied group that only occurs in New Zealand, southeastern Australia, Tasmania, and Chile, so they are easy to overlook,” explained Tihelka.

“The new results suggest that we may need to revise our entomology textbooks. Fleas no longer deserve the status of a separate insect order, but should actually be classified within the scorpionflies,” said CAI Chenyang, associate professor at NIGPAS and expert on Mesozoic insects.

The new findings agree with fossil evidence. “We have exceptionally preserved fossil fleas from the Jurassic and Cretaceous. In particular, some Jurassic fleas from China, about 165 million years old, are truly giant and measure up to two centimeters. They may have fed on dinosaurs, but that is exceedingly difficult to tell. What is more interesting is that these ancient fleas share important characteristics with modern scorpionflies,” said CAI.

“Sometime between the Permian and Jurassic, a group of scorpionflies started feeding on the blood of vertebrates. This group gave rise to fleas as we know them today,” added Prof. HUANG Diying of NIGPAS.

“It is interesting,” commented Mattia Giacomelli, a Ph.D. student at the University of Bristol who participated in the study. “We used to think that all blood-feeding parasitic insects basically started off by either being predators or living in close association with their vertebrate hosts, like in their nests. The case of fleas shows that blood feeding can evolve in groups that originally fed on nectar and other plant secretions. It seems that the elongate mouthparts that are specialized for nectar feeding from flowers can become co-opted during the course of evolution to enable sucking blood.”