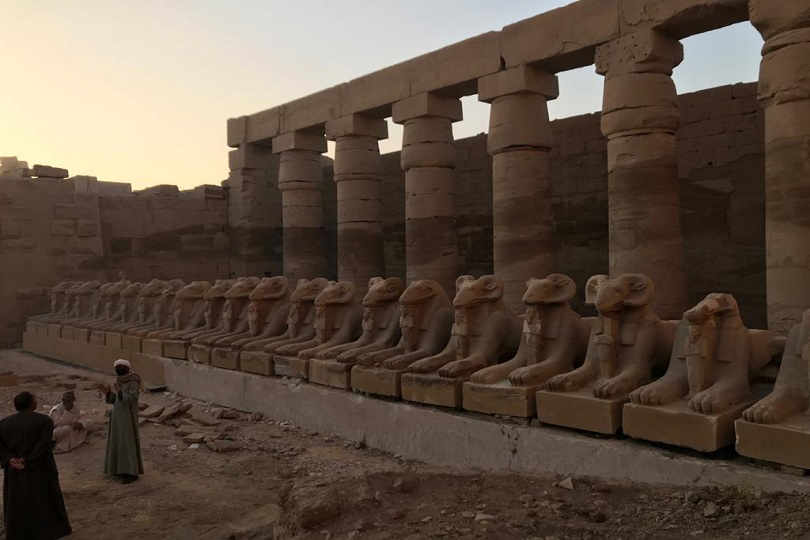 Dr. Khaled El Enany, Minister of Tourism and Antiquities, the Governor of Luxor, and Dr. Mostafa Waziry, Secretary-General of the Supreme Council of Antiquities, visited the first phase of the restoration project of some of Rams statues located behind the first pylon in the Temple of Amun Ra in the temples of Karnak in Luxor. This included the restoration of 29 statues in the southern region, and  the implementation of the second phase started, which includes restoring the rest of the 19 statues group in the northern region.

During the inauguration, the Minister of Tourism and Antiquities and the Governor of Luxor listened to a detailed explanation from the archaeologist Salah El Masakh about the work that was done to restore the Rams statues, where the Minister thanked the restorers and workers who carried out this huge project. He  also thanked the governor for the work done by the governorate to develop the city’s infrastructure and its corniche.

The minister also inspected the excavations of the Egyptian archaeological mission headed by Mustafa El Saghir, director of the Karnak temples, on the road to the major processions, where the foundations of the gate of the Khonsu Temple were discovered, which is a huge granite stone lintels reused from the era of King Thutmose III, in addition to the restoration work in the main lobby of the columns.

Mr. Mohamed Othman, head of the Cultural Tourism Marketing Committee in Upper Egypt, indicated that the committee has set up excavation in the parade of major celebrations on tourism excursion programs to inform tourists of what archaeologists are doing to discover the secrets of the ancient Egyptian civilization.